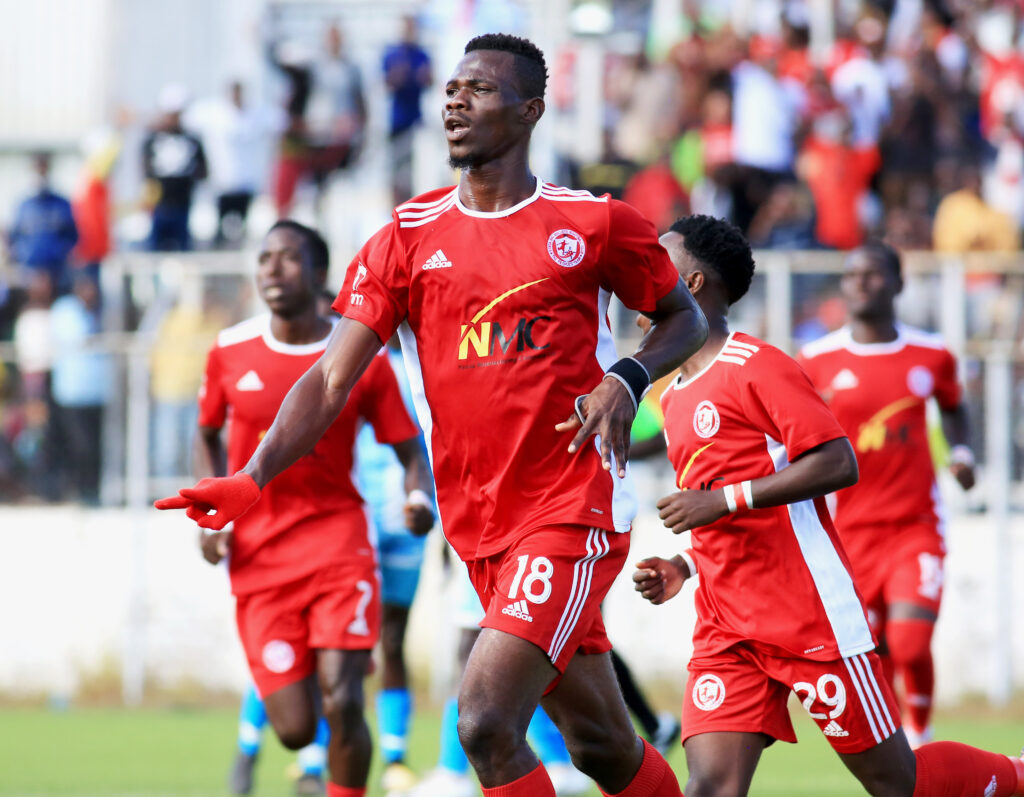 A first-half brace from Babatunde Adepoju and a lone strike from Patrick Mwaungulu inspired Nyasa Big Bullets to a comfortable 3-1 win over Silver Strikers at Kamuzu Stadium on Saturday.

The victory saw The People’s Team opening up a four-point lead at the top of the TNM Super League standings.

Bullets meant business as they attacked from all cylinders, making it very difficult for the visitors to cope with their pace in a top billing clash between the Blantyre and Lilongwe giants.

Straight from last week’s win at TN Stars, head coach Kalisto Pasuwa made one change by re-introducing Lanjesi Nkhoma for Anthony Mfune, whilst Daniel Kabwe welcomed back Chawanangwa Kaonga and Blessings Tembo, who were out of action for several weeks due to injuries.

Patrick Mwaungulu opened the scoring for the hosts from a brilliant freekick in the 12th minute, beating Charles Thom who did everything in his power to prevent the ball from going in.

Five minutes after scoring, Mwaungulu turned into a provider when he delivered a beautiful cross into the six-yard box for Babatunde Adepoju to produce a powerful header past Thom, 2-0.

At 22 minutes, Bullets had made things very difficult for the Central Bankers when Babatunde completed his brace from the spot following a handball by Nickson Mwase inside the box.

Sensing danger, Kabwe made a double substitution in the 25th minute when he introduced Tatenda M’balaka and Rodwell Robert for Tembo and Mark Fodya.

This brought some stability, especially in the wings where Mwaungulu and Nkhoma were causing problems for the Area 47-based side.

With eight minutes left to play in the opening half, Hadji Wali was caught napping in the line of duty when he allowed Stain Davie to pounce on him, and the Bullets center-half committed a foul against the forward, conceding a freekick that was easily dealt with by Kesten Simbi.

In the second half, Silver Strikers had good possession through Zebron Kalima, Chikondi Kamanga and Chawanangwa Kaonga, but the hosts were very organised in every department, with Chimwemwe Idana controlling the midfield with his pace.

58 minutes into the match, Babatunde made a brilliant run into the box but his shot at goal went wide when Thom was already beaten in the line of duty.

At the other end, Emmanuel Muyira saw his long-range shot missing Richard Chimbamba’s right-hand post with an inch after the midfielder got the better of Precious Sambani in the attacking zone.

Pasuwa then introduced Hassan Kajoke and Alick Lungu in the 65th minute for Nkhoma and Sambani.

Kajoke nearly made an instant impact when he used his pace to outrun Mwase, but the forward opted for personal glory instead of just sending the ball into the box to Babatunde and Ernest Petro who placed themselves within shooting range.

The Bankers looked a better team and pushed men forward in attack, but this opened space for the hosts on the counter as Babatunde twice failed to capitalize when his shots went over the crossbar to the relief of Kabwe’s led technical panel.

Kajoke then made another good run to the left and he once again opted for a goal when Mwaungulu and Babatunde were waiting for the ball inside the penalty box.

With ten minutes to play, Kajoke, the 2020/21 Golden Boot winner, was very unfortunate not to register his name on the scoresheet when Mwaungulu combined well with Idana to create space for the Bullets number 9, but his goal-bound shot was well blocked by Mwase for a corner, which had no impact as the visitors cleared the ball away from the danger zone.

Pasuwa made his final substitution in the 81st minute when he subbed off Ernest Petro and Mwaungulu for Yankho Singo and Misheck Seleman.

The Bankers were able to reduce the arrears in the 90th minute following a back-pass from Singo to Simbi, however, Davie was quick to intercept before slotting the ball past Chimbamba, 3-1, but it was too late as Bullets defended with everything to claim all the points to open up a four-point lead at the top after Blue Eagles drew 0-0 against Kamuzu Barracks.

Bullets, from 12 games, have 32 points whilst the Bankers are still 5th with 16 points from 11 games.

By scoring a brace, Babatunde is now leading the scorers’ chat with 7 goals, one ahead of Rumphi United’s Trouble Kajani, who lost 3-0 to Mafco FC.