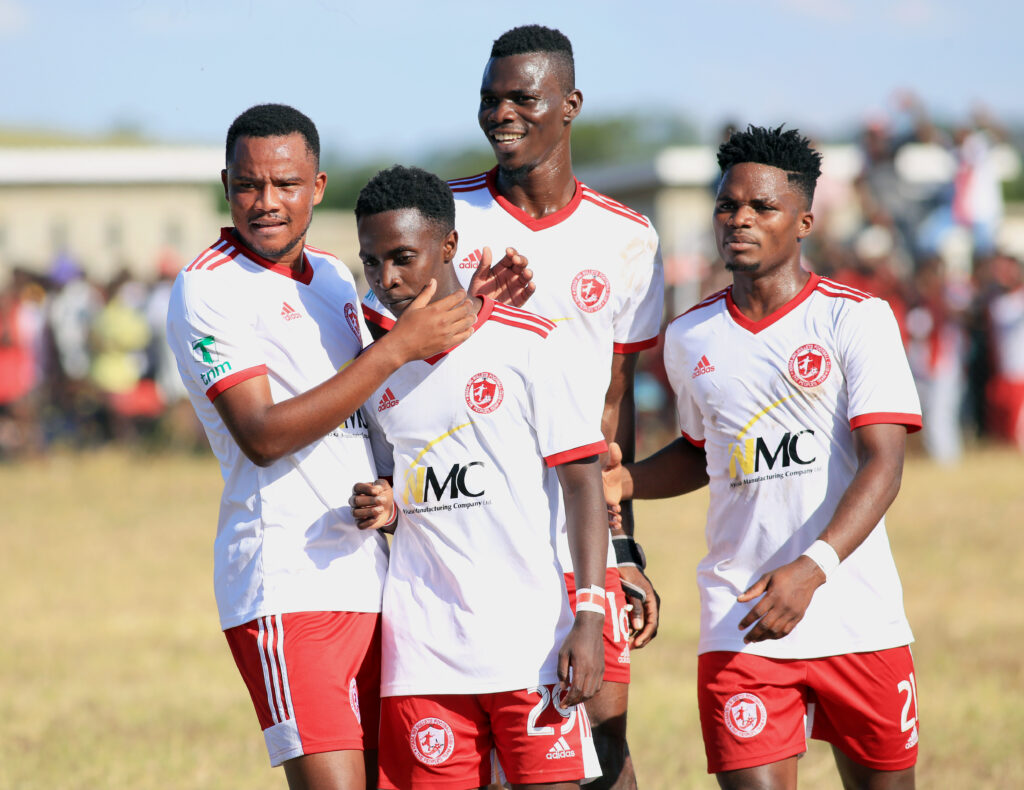 Patrick Mwaungulu’s first-half brace inspired Nyasa Big Bullets to a 0-2 win over TN Stars in the TNM Super League on Sunday afternoon, taking The People’s Team top of the standings with 29 points.

It was Mwaungulu’s first brace in the elite league after being promoted to the first team from Bullets Reserves.

The defending champions were going into the match a point behind Blue Eagles, who dropped points at home after playing out to a goalless draw against Civil Service United midweek.

Kalisto Pasuwa made one change to the side that won away to Red Lions last week by handing Anthony Mfune a place in the starting XI, replacing Lanjesi Nkhoma, whilst TN Stars maintained the same lineup that won to Rumphi United seven days ago.

Bullets should have taken a lead in the second minute when Hadji Wali pounced on Mwaungulu’s corner kick, but the center-half’s header missed the woodwork with an inch.

Moments later, Chimwemwe Idana set through Anthony Mfune, who was found in a one-on-one situation with goalkeeper Blackson Kotei, however, the TN Stars shot-stopper came out top with a brilliant save to keep his team into the game.

The visitors were knocking at TN Stars’ doors for an early goal and another opportunity came in the 13th minute when Mwaungulu played through Mfune, but the striker’s run was cut short by Fred Banda, who arrived early to deny him space to shoot.

At the other end, Gomezgani Chirwa brought down Phillip Banda close to Bullets’ penalty box and Martin Msewa stepped up to deliver a very dangerous cross into the box, finding Frank Chizuze, who produced a powerful free header only to be denied by the post.

The People’s Team broke the deadlock in the 26th minute when Mwaungulu received a pass from Babatunde Adepoju and the youngster beat two opponents before picking a spot and fired past Kotei, who could do nothing apart from watching the ball hit the back of the net, 0-1.

This goal kicked the hosts into gear and they could have leveled in the 32nd minute when Chizuze found his way into the penalty box before setting up Alfred Chizinga, who failed to guide the ball into the net when Richard Chimbamba was already beaten in the line of duty.

The miss proved too costly for Kondwani Mwalweni’s men as they found themselves 2-0 down in the 35th minute, again through Mwaungulu, who tapped the ball into an empty net from Chirwa’s square pass into the six-yard box after he used his pace to outrun Msewa on the right flank.

Pasuwa made a first-half change when he brought on Alick Lungu and Misheck Seleman for Precious Sambani, who looked to have suffered a knock, and Mfune who seemed struggling to lead the Bullets’ attack on the day.

Bullets should have found the back of the net again in the 42nd minute when Adepoju was released to the right, finding himself in another one-on-one situation with Kotei, but his volley was saved by the Ghanaian goalkeeper who was doing well despite being exposed at the back.

In the second half, TN Stars surprised everyone when they substituted a lively Chizuze for their new signing, Bismack Agyekum from Ghana.

It was a half mostly dominated by the hosts, who created a lot of goal-scoring opportunities but they lacked composure in front of the goal for them to salvage something.

Chimbamba did superbly well to keep out Chizinga, who created shooting space following a communication breakdown between Chirwa and Simbi.

TN Stars looked a better team and pushed men forward in attack, but this exposed their defence as Mwaungulu almost scored his third for the day when his rocket shot missed Kotei’s goalmouth with just an inch.

In the 58th minute, Chirwa tried to score from a freekick but his effort hit the wall.

Mwaungulu would have Bullets’ next chance but his effort went over the crossbar to the relief of the home team.

As TN Stars kept on pushing, Pasuwa introduced Henry Kabichi and Precious Phiri for Idana and Chirwa as he tried to bridge the gap between Bullets’ defence and the midfield.

76 minutes into the game, Adepoju won a freekick in the attacking zone and Mwaungulu stepped up in an attempt to grab a hattrick, however, his effort went straight at Kotei.

With six minutes left, Chirwa forced Chimbamba into making a save when his powerful drive outside the penalty box was well challenged by the Bullets ‘keeper

Pasuwa’s men had their final chance in the 87th minute through Adepoju, whose header went over the crossbar from Phiri’s cross.

Bullets made their final change in the dying minutes when Pasuwa introduced Thomson Magombo for Petro, but the midfielder had no major impact as the referee blew his final whistle to mark the end of the match.

The result means Bullets have now collected 29 points from eleven games, two above Eagles, who have 27 from the same number of games.

As for the hosts, this is their worst start to the season since their promotion into the elite league in 2018 as they lie 15th in the standings with eight points from eleven games.

PrevPreviousMatch Preview: TN Stars vs Bullets
NextPasuwa: We can do moreNext