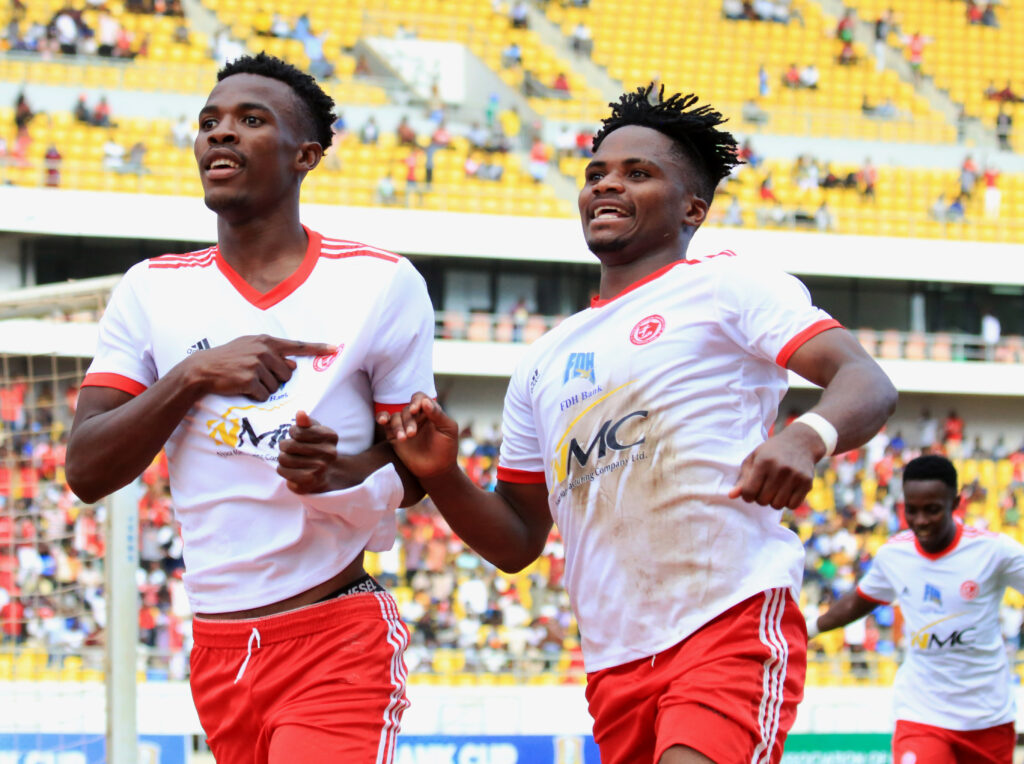 Nyasa Big Bullets are through to the final of the FDH Bank Cup following their 4-0 hammering of Mighty Mukuru Wanderers in the Blantyre derby played at the Bingu National Stadium on Saturday afternoon.

The People’s Team were coming from back-to-back defeats to Simba SC in the CAF Champions League and were desperate to bounce back, something which they did in style by humiliating their cross-town rivals.

Kalisto Pasuwa made several changes to the side that lost to Simba in the return leg by only maintaining Anthony Mfune, Gomezgani Chirwa, John Lanjesi, Precious Sambani, Hassan Kajoke and Ernest Petro whilst Richard Chimbamba replaced Clever Mkungula in goal, with Chimwemwe Idana, Kesten Simbi and Frank Willard all returning to the first eleven.

Wanderers dominated early proceedings with passing football but they lacked the killer punch to unlock Lanjesi’s led defense which was very organized.

It took almost 12 minutes for the two sides to register a shot at goal, with Muhammad Sulumba attempting an audacious long-range effort that went wide off Chimbamba’s goal month.

The Nomads had another opportunity in the 15th minute when referee Godfrey Nkhakananga awarded them a freekick close to the penalty box but Isaac Kaliyati blasted his effort over the crossbar.

At the other end, Bullets created their first realistic goal scoring opportunity when Chirwa decided to take things into his own hands only to pass the ball to Kajoke who was offside and his shot, which was initially saved by Richard Chipuwa, wouldn’t have had any impact had the ball kissed the back of the net.

But Bullets were able to find the opening goal in the 24th minute through Chirwa.

A through ball from the midfield to Mfune saw the forward making a brilliant run to the right before sending an inviting pass to Chirwa, who composed himself in the area before slotting the ball past the defenseless Chipuwa, 1-0.

This goal was all what Bullets needed and they took the game to their opponents who were now struggling to deal with the fast wingers who were pressing from all cylinders.

But Sulumba should have had an equalizer in the 28th minute when he spotted Chimbamba out of position and the forward produced an ambitious shot which missed the upright with an inch.

The hosts were organized in every department and they really learnt their lessons from the 3-3 draw in their previous league encounter last month when the Nomads came from behind twice with all their goals originating from set pieces.

Lanjesi was on top of his game and so was Simbi. The two wingbacks, Chirwa and Sambani, who were attacking from all angles were also brilliant as they defended with caution to avoid creating a vacuum at the back.

40 minutes into the match, Idana should have doubled Bullets’ lead when he created space on the edge of the box only to lose possession to Stanley Sanudi when shooting was the best option.

The Nomads should have leveled on the dot of half time when Simbi failed to clear a long ball from Chipuwa, allowing Sulumba to win the ball only to send his effort over the crossbar and that was all for the half.

After the recess, Mfune was the first to register a shot at goal when he got the better of Joseph Balakasi only to be denied by Chipuwa, who conceded a corner which Bullets could not utilize.

Maule were able to double the lead in the 49th minute through Kajoke, who was brought down by Miracle Gabeya in the penalty box and the Bullets number 9 stepped up and scored the second goal from the spot, 2-0.

The Nomads were under siege and they should have conceded again in the 57th minute when Mwaungulu made a run to the right before sending a low cross to Mfune who made a first-time connection only to be denied by Chipuwa who was the busiest of the two goalkeepers.

But Bullets put the game beyond Wanderers’ reach when an error from a back pass to Chipuwa was won by Chirwa who rounded off the shot-stopper before passing the ball to Mfune who connected well into the net, 3-0.

Bullets suffered an injury in the 72nd minute and captain Lanjesi was stretchered off the pitch to be replaced by Nickson Nyasulu.

Kajoke almost doubled his tally in the 74th minute when he excellently found himself in the attacking zone to shoot at goal only to be denied by the post, before the flag went up for offside.

Wanderers had an opportunity to reduce the arrears in the 85th minute when Mpinganjira set Nyangulu on goal but Chirwa was very alert as he intercepted the ball for a corner kick which was easily defended by Sambani.

In the 88th minute, Kajoke excellently curved his shot over Gabeya and Chipuwa only to see the ball hitting the upright, denying Bullets an opportunity to add their fourth goal.

But The People’s Team eventually scored their fourth goal through Babatunde’s clinical finish after he was found in the penalty box by Mwaungulu.

The win will see Bullets playing their Reserve team in the final on 8th October 2022 at Kamuzu Stadium in what will likely be a ‘family affair’.

PrevPreviousBlantyre derby preview: Bullets vs Wanderers
NextWhat we have learnt from our 4-0 win over WanderersNext