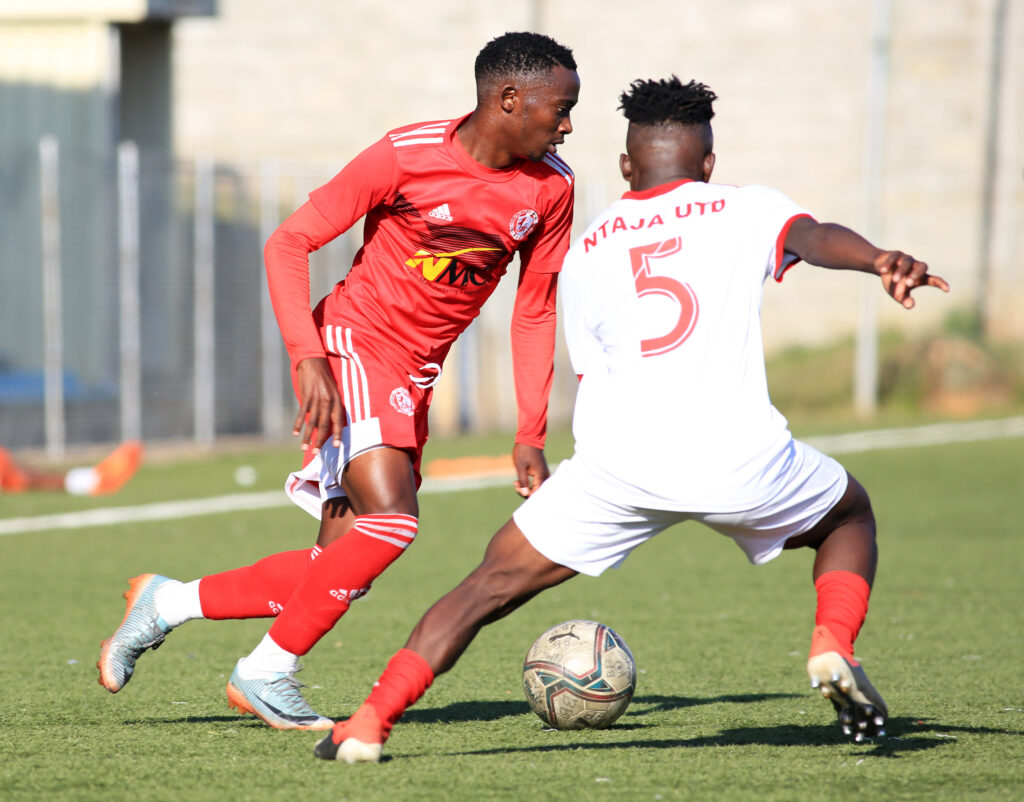 Nyasa Big Bullets Reserves have qualified to the national level of the 2022 FDH Bank Cup following a 2-0 victory over Ntaja United in the Preliminary Round 2 at Mpira Stadium on Sunday afternoon.

It was a closely contested match especially in the opening 20 minutes as Ntaja defended in numbers to frustrate the hosts, who were finding it very difficult to unlock the defensive pair of Blessings Chikapa and MacDonald Mussa.

Emmanuel Saviel, who found his way back into the team after recovering from an injury, saw his long range effort being saved by shot-stopper Kennedy Nakhaima in the 15th minute.

But Nakhaima could not do anything to stop Mapemba from finding the back of the net in the 23rd minute with a well curved shot that hit the upright before going in, 1-0.

At the other side of the field, Vitumbiko Ngumane’s touch of class released Bright Medson upfront, but the Ntaja forward’s shot was saved by Rahaman John in goal for the hosts.

Soon after the half-hour mark, it was 2-0 to the young Bullets.

An exchange of passes between Lyton Chinong’one, Macray Chiwaya and Felix Dumakude exposed Ntaja United defence, forcing them to open up and allowed Salima to make his way into the box before firing past Nakhaima, who was alone in the line of duty.

The goalkeeper was once again called into action in the 38th minute to stop Chinong’one from registering his name on the scoresheet when he produced a beautiful save.

After the recess, the visitors came out good as they started pressing for a goal, attacking from all angles and dominating possession, however they lacked the finishing composure in front of goal.

Twice they attacked and came close to reducing the arrears through Medson, who was giving Andrew Lameck’s led defence some tough times.

Saviel would have added another goal after he was found alone in the penalty box, however the forward was too slow to act, allowing the visitors to regroup put the ball away to safety.

Salima with his magic foot taunted Ntaja’s back four before sending a low cross drive into the box in the 65th minute, but Chiwaya failed to convert from the D-zone as his effort went over the crossbar.

After scoring a beauty in the first half, Mapemba was at it again, this time around hitting the ball with power only to be denied by the upright when Nakhaima was already beaten.

Chatama introduced Gift Jossam for Chiwaya in the 73rd minute to try to reinforce his midfield, which was slowly losing the grip to the visitors.

Jossam almost scored with his second touch from a set piece when he curved the ball above a four-man staged wall and was bound to go in but Nakhaima came to the rescue with a brilliant touch to concede a corner.

78 minutes on the clock, Medson tempted John with a long range powerful drive which nearly caught the goalkeeper off-guard, but he did well to put the situation under control with a good save.

Speaking after the match, Chatama admitted that Ntaja, a team which defeat young Bullets in the Southern Region Football League end April, gave them a tough run for their money and he was glad that his players managed to score those two important goals to sail through to the Round of 32.

“It was a tough match as Ntaja United defended with everything especially in the first half, but I advised my players to keep on pushing for a goal or two and we scored twice.

“In the second half Ntaja attacked, but we defended well. It’s a game which wasn’t easy for us, but [at the end] we have made it to the national level. We will wait for the draw and take each game as it comes,” said Chatama.