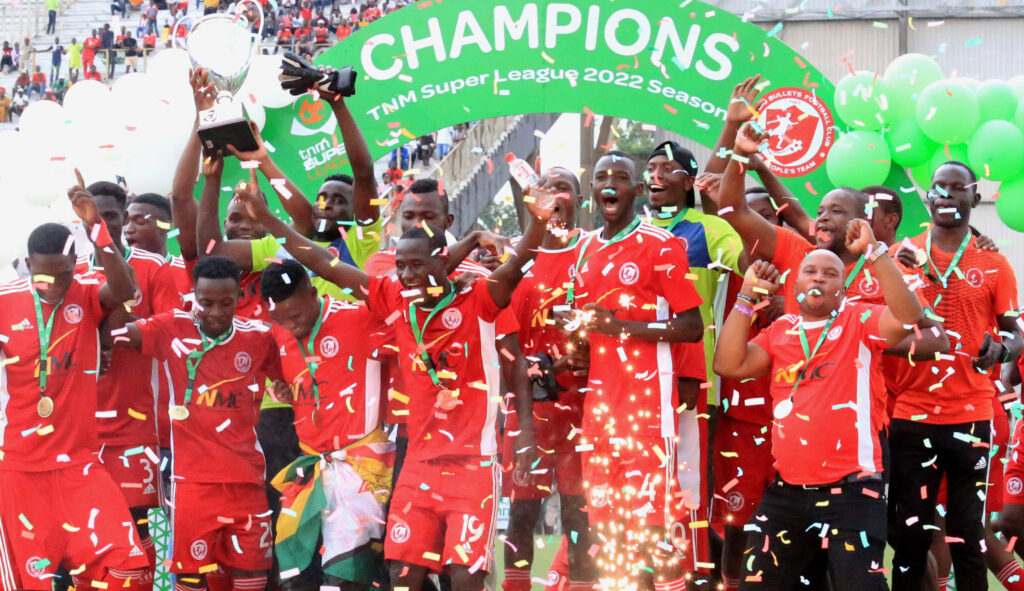 Hassan Kajoke came from the bench to score the winner as Nyasa Big Bullets closed the 2022 TNM Super League campaign with a 2-1 win over Dedza Dynamos at the Kamuzu Stadium on Saturday.

Strikes from Babatunde Adepoju and Sadick Ibrahim in the first half sent the two teams even at the break but Maule won it in the final half with Kajoke’s goal in the 75th minute.

For the opening half an hour, the visitors’ organization in their setup managed to keep Bullets at bay.

The chances were there in this period. Two of them. Gomezgani Chirwa was released with a delicious through ball from Patrick Mwaungulu but struck straight at the keeper. That was before Babatunde missed a good chance in a one-on-one situation.

However, a minute after the half-hour mark, Babatunde was presented with another goal-scoring opportunity and this time he found the back of the net to give us the lead and took his goal tally to 18.

Our opener did not scatter the visitors who kept their feet in the game until they fought back in the 41st minute through Ibrahim.

Babatunde had a chance to restore our lead in the second half when Lanjesi Nkhoma was fouled in the area and won a penalty, but the Nigerian striker hit the post not long before he was subbed for Hassan Kajoke.

It only took Kajoke eight minutes for him to re-establish our lead after nodding home a well-struck free kick from Mwaungulu on the left flank.

With several changes Pasuwa made in the final quarter of the tie, the champions were able to maintain the score-line until the full-time whistle.

Signed as a free agent two weeks ago, Maxwell was yet to be unveiled to the fans but during the half-time of the match against Dedza Dynamos today, the former Silver Strikers forward took a walk around the Kamuzu Stadium while interacting with the fans in the stands.

With him was the 20-year-old Chawanangwa Gumbo, the new signing from Ekwendeni Hammers, who was announced a few hours before today’s match kickoff.

The 2022 TNM Super League season has been scintillating for Babatunde Adepoju and on its final day he was on target with our opener to take his goal tally to 18.

His final strike of the league season was enough for him to scoop the Golden Boot prize, beating Mighty Mukuru Wanderers’ Muhammad Sulumba, who has finished second on the top goal scorers’ chart in the league with 15 goals.

With the win today, Nyasa Big Bullets have now won the league with the highest points than any other team in top-flight football for the past decade. Kalisto Pasuwa’s side has surpassed the 71 points we accumulated back in 2018.

The champions have grown a thick membrane against complacency. Despite the two titles they have won already this season, they keep on going. Now they will be looking to win the Airtel Top 8 and complete a treble this season.

The champions beat their fierce rivals, Mighty Wanderers 2-1 at the Kamuzu Stadium on the opening day of the season and at the same venue, they finished their season campaign with a 2-1 win over Dedza Dynamos. So just like they did on matchday one, Bullets closed their 2022 TNM Super League season with a win by the same margin on matchday 30.

Having won the championship and the FDH Bank Cup, now The People’s Team will be eyeing to complete a treble as their focus shifts to the Airtel Top 8 competition in which they are expected to face Karonga United in the quarterfinals return leg away up North next weekend.

The People’s Team will travel to Karonga with a seven-goal advantage following a 7-0 thumping of the Ingwinas a fortnight ago.