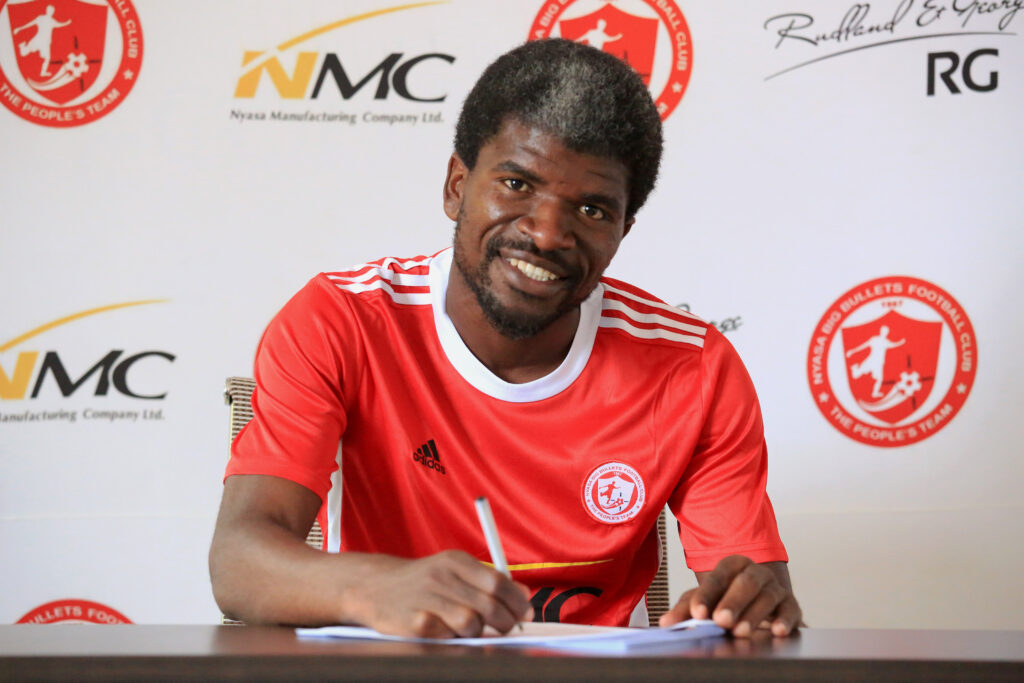 Nyasa Big Bullets is pleased to announce that Yamikani Fodya has signed a one-year contract extension, which keeps him at the club until August 2023.

One of the longest-serving players in the modern generation, the left-back, now turned into a defensive midfielder, joined Bullets in 2009.

The interesting part about his first days at Bullets was when he sat on the bench as a substitute goalkeeper to the late Trust Lunda against Dwangwa United in Chitowe where Bullets won 1-0.

Next for him and his new team was a trip to Lilongwe to play Civil Service United in which he was also a substitute goalkeeper in a game we lost 0-1.

The following week, Fodya made his full debut in red and white at Kamuzu Stadium against Eagles and that was the beginning of a remarkable 13-year journey with The People’s Team.

Despite joining the club in 2009, it took three years for the Balaka boy to start winning trophies.

At the time he was joining the club, Bullets had lost sponsorship from the then Head of State, Bakili Muluzi, and things were tough as there were no finances to run the club and it was almost impossible to battle with teams that had financial power, the likes of Silver Strikers, Escom United and Mighty Wanderers back then.

Known for its pride, Bullets were reduced to just participants until 2012 when the club won its first trophy in almost a decade.

The People’s Team won the Presidential Cup after overcoming a resilient Moyale Barracks at Civo Stadium through a first-minute strike from Gabadinho Mhango who is now playing for South Africa’s Amazulu FC.

In that season, Fodya missed the Super League championship medal on goal difference after the team finished level on points (58) with Silver Strikers.

The following season, Bullets finished the whole season without any silverware, but the team came back stronger in 2014 when they won both the Super League and Carlsberg Cup.

In 2015, Fodya won his second Super League championship but failed to make it three out of three when Kamuzu Barracks won the 2016 title with just a point.

But it was not that bad for the left-back who won the Presidential Cup for the second time in his career following Bullets’ victory over Moyale Barracks on penalties at Civo Stadium.

In 2017, Bullets missed out on the league title but won the Carlsberg Cup after beating Wanderers on penalties at Bingu National Stadium.

He also won the Airtel Top 8 in the 2020/21 season after coming from behind to beat Silver Strikers 5-4 on penalties at Kamuzu Stadium following a 1-1 stalemate in regulation time.

In the ongoing season, Fodya has won the FDH Bank Cup and is also on the verge of winning the 2022 TNM Super League as Bullets are only looking for four points to retain the title for a fourth successive season.

What he said about the new deal

“All the praise should go to the Almighty God for this opportunity. I am very grateful to the management, the technical panel, my fellow players and the supporters, they have been very supportive and amazing to me throughout the years I have been with the club and I will continue committing myself to the team for us to continue winning trophies.”

What he said about his journey with Bullets

“To be honest with you, it hasn’t been an easy journey for me. I came at a time when there were no allowances, no salaries and no motivation. We were just playing for the sake of playing but to see the club the way it is being run right now, it can only be God. It was a tough journey and we are very thankful to God for reaching this far.”

In 2010, he was named Best Defender of the season, just a year after joining the club even though Bullets never won anything in that campaign.

In 2015, the left-back was also named the Best Defender of the season after an impressive performance. He was the only defender to have scored more than nine goals as he inspired The People’s Team to the league title.

But the highlight of what happened in that season was when he scored a freekick in the dying minutes to help Bullets beat Silver Strikers 2-1 at Silver Stadium.

Chiukepo Msowoya had given Bullets a lead before The Central Bankers levelled in the second half.

With two minutes left to play, Fodya rose to the occasion and scored a very stunning freekick to send all Bullets fans into a frenzy.

He was also named Player of the Tournament at last season’s CECAFA Kagame Cup in Tanzania where The People’s Team finished as runners-up to Uganda’s Express FC.

In 2015, he, together with Blue Eagles Sisters netballer, Takondwa Lwazi, was named Anti-Doping Ambassador.

Fodya was on the verge of clinching a deal to a foreign club when he got injured towards the end of the 2011 season.

By then, the season was already over when Bullets was invited to take part in Nsejjere games and it was during those games that the defender got injured and his dream of clinching a deal with a foreign club was over.

The left-back spent almost a year recovering from the injury and he resumed training in the middle of the 2013 season.