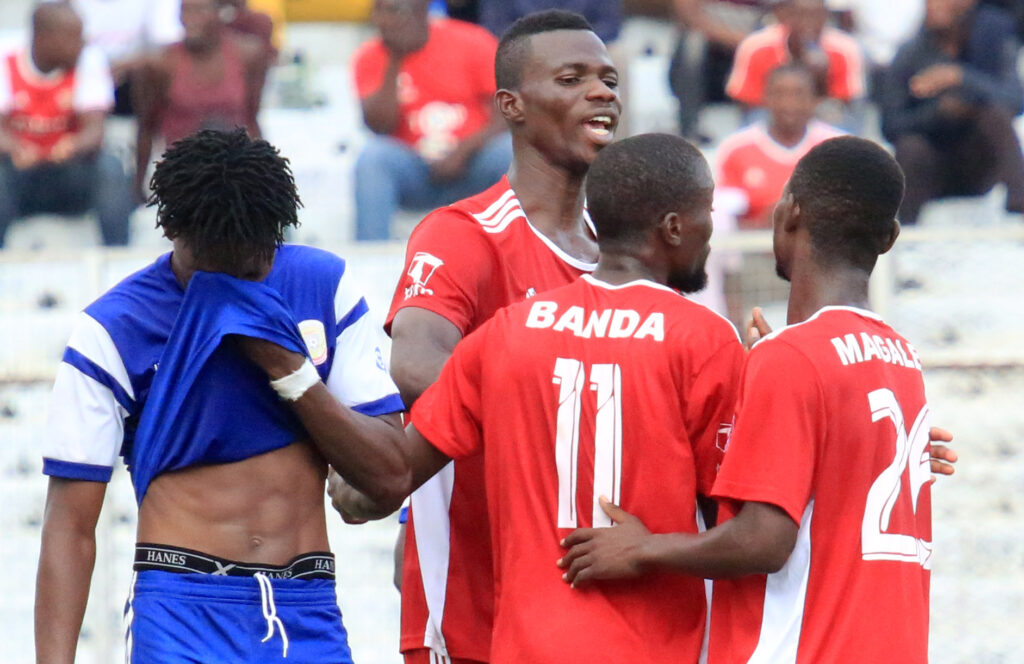 It looked like the visitors, whom we recently thumped 7-0 in the Airtel Top 8 quarter-final first-leg at the same venue, had done their homework well and that they were ready to avenge when they opened the scoring in the 25th minute.  What followed is probably what they could not have envisioned.

Before the kick-off of the midweek fixture, Bullets received a guard of honour from the visiting team for winning the championship last Saturday but were off to a lacklustre start to the match.

The play was stop-start for most of the opening minutes due to fouls and passing inaccuracy from both teams. The intensity The People’s Team has been buzzing with all along its way to the fourth consecutive title was simply not there that Kalisto Pasuwa spent a lot of time volleying instructions for his men to jack up.

It looked all jittery for us after 20 minutes of play and fans in the stands started to shout for early changes. Things got even ugly for us when Mphatso Kamanga, left to pry unmarked in the box, gave the visitors the lead with a lovely flying header past the outstretching Rabson Chiyenda.

Unmoved, Pasuwa maintained his setup of the game which included mostly this season’s fringe players, and a minute after going one nil down, Bullets equalized through Hassan Kajoke, who nodded home inside the penalty area.

The goal did spur The People’s Team but not much in terms of pace and threat. Nonetheless, a moment of art and brilliance arrived at the stroke of halftime. Thomson Magombo, who in the end won the Man of the Match award, slid a fabulous through ball into the path of Kajoke who superbly pressed the ball into the bottom right corner of the net, 2-1 to Bullets.

Maule went for the break leading but their overall first-half performance probably must have made Pasuwa give scolding words to his stars.

In the first half, we struggled to maintain our usual playing shape and many combinations were broken in transition. The story was still the same at the restart and at the one-hour mark, Pasuwa was made to call for an offensive change. He took off Yamikani Fodya and Kajoke and brought Billiat and Mphatso Magaleta into the game that lacked pace and quality.

Soon after coming on, Billiat registered his name on the scoresheet to extend our lead. Two minutes after coming on, the winger received a glorious through ball from the exciting creative, Magombo on the far right and with quick small steps, the youngster drifted into the area before he toed the ball through the legs of the visitor’s goalkeeper Lloyd Munthali, 3-1.

Wanting more Pasuwa made another double substitution as he replaced Henry Kabichi and Lanjesi Nkhoma with Righteous Banda and Precious Phiri soon after scoring our third. That card proved to be a winning one again for the Zimbabwean coach as Banda became the second substitute to get on the scoresheet for us.

After rapid Bullets shots were blocked in succession by the visitors’ defense, in the last minute of normal playing time, Banda squeezed the ball past the army of defenders with a firm half volley to make it 4-1. The full-time whistle came shortly after that to conclude a mixed performance from the champions which nonetheless gave them a perfect result.

The maximum points Bullets got today now take their points to 70. From the 29 games that they have played this season, they have managed to find the back of the net 67 times. With 20 goals conceded so far, The People’s Team is third on the list of teams to have conceded less in the Super League this term.

Magombo has been given limited time in his first season with the champions following his promotion from Bullets Reserves, but his sparkling performance today will surely make Pasuwa think otherwise of him in the league next season. The lad was amazing to watch in the middle of the park as he mixed well with the two veterans Fodya and Kabichi that the MOTM award he earned on Wednesday afternoon came as no surprise to many.

As he leads with 17 goals in the TNM Super League top goal scorers’ charts, Babatunde had a chance to increase his goal tally but was well contained by the visitors for him to leave the scoresheet blank of his name against the Ingwinas of Karonga.

Pasuwa fielded most of his fringe players but still managed to send Karonga to the cleaners again. Clearly, it does not matter which weapons are at his disposal, the Bullets tactician always seems to have a conquering arsenal.

After easily outrunning Karonga United for the second time this season, the champions have one last task in the league. This coming Saturday Bullets will be back at the Kamuzu Stadium where they will welcome Dedza Dynamos on the final day of the 2022 TNM Super League campaign.