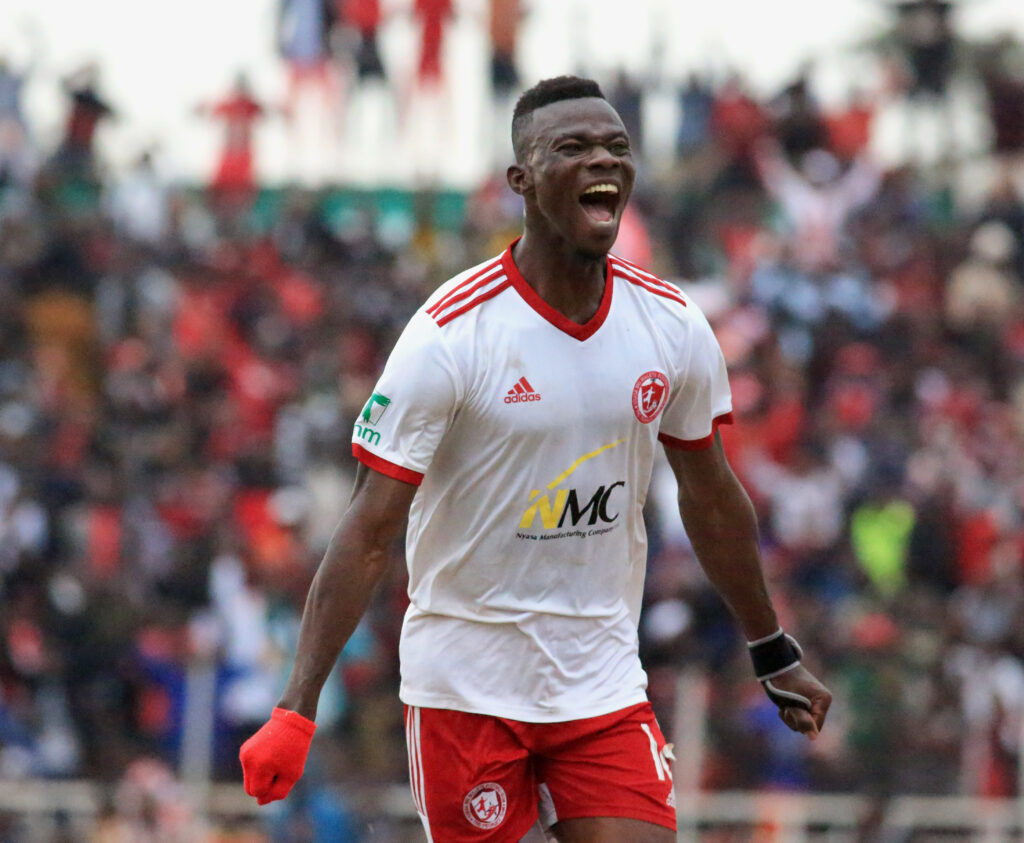 Nyasa Big Bullets extended their unbeaten run to fourteen games and opened up an eight-point lead over second-placed Blue Eagles with a hard-fought 1-0 victory over Kamuzu Barracks at Civo Stadium in Lilongwe on Sunday afternoon.

Head coach Kalisto Pasuwa made two changes to the side that hammered Mighty Tigers 5-0 last week by handing starts to Hassan Kajoke and Macfallen Mgwira, who replaced injured Lanjesi Nkhoma and Ernest Petro.

It was a tough match due to a dry and bumpy pitch, a situation that saw both teams failing to play a passing game and resorted to long balls in a desperate move to find a goal.

Bullets started brightly and had their first corner kick in the second minute, but Herbert Wayekha cleared the ball out of KB’s half to safety.

The opening 15 minutes saw more of Bullets than the hosts, but every cross into the box found Wayekha, who was very outstanding in defence for the Chiwoko Boys.

The first clear chance of the day for Kamuzu Barracks fell through to Zeliat Nkhoma, who made his way to the offensive zone before shooting at goal, however, Richard Chimbamba was equal to the task with a save.

Bullets came close to breaking the deadlock in the 27th minute when Wali’s header from Patrick Mwaungulu’s cross hit the post and that was the only clear chance for Bullets in the opening period.

At the other end, Chimwemwe Chisambi found Matthias Nyirenda clear at goal and the former Tigers forward wasted no time by releasing a thunderous shot, again calling Chimbamba into action with another brilliant save for a corner kick.

As the half was heading towards recess, Bullets had an attempt at goal, but Kajoke mistimed his shot for a goal kick and that was all for the half.

At the start of the final period, Pasuwa introduced Precious Phiri for Mgwira, who had earlier on received a yellow card.

Phiri saw his shot from the center of the penalty box going wide after he was found unmarked by Precious Sambani.

But chances were few, with long balls being the business of the day. There was a period in which Bullets dominated, but every dead ball ended up in the hands of Banda as no one in a white and red shirt was closer to the penalty box to finish off the job.

However, the moment that Bullets was waiting for arrived in the 74th minute. A move from Chimwemwe Idana found Phiri, who set through overlapping Gomezgani Chirwa and the full-back made a first time connection, sending a square ball into the box to the on-rushing Babatunde and the Nigerian forward made no mistake to put the ball into the back of the net, 0-1.

This goal was all what Bullets needed and Pasuwa’s men started pressuring and they should have had another goal in the 78th minute when Chimwemwe Idana played through Phiri, however his weaker shot was well blocked by Sam Chibvunde.

Nyirenda was then replaced by Manasseh Chiyesa, whilst Bullets’ Ghanaian center-half Isaac Badu made his debut for The People’s Team when he replaced Blessings Mpokera.

This was also a period in which KB pressurized Bullets, with Daisi hitting the side net before another miss from Nkhoma.

The reigning champions were leaving dangerously as KB resorted into aerial balls in the penalty box, however Wali, Kesten Simbi, Chirwa and Sambani’s defence rose up to the occasion with brilliant interceptions.

The visitors were hit with a massive blow when Simbi was stretchered off after he was elbowed by Kelvin Hanganda and he was replaced by Nickson Nyasulu.

90 minutes on the clock saw the referee adding four minutes, but this was met by another injury to Banda, who was replaced by KB’s seasoned goalkeeper Lehman Nthala, but Bullets stood firm to collect maximum points, registering eight straight wins and comfortably sit at the top of the summit with 38 points.

Bullets will finish the first round with a home tie against Sable Farming on Saturday.