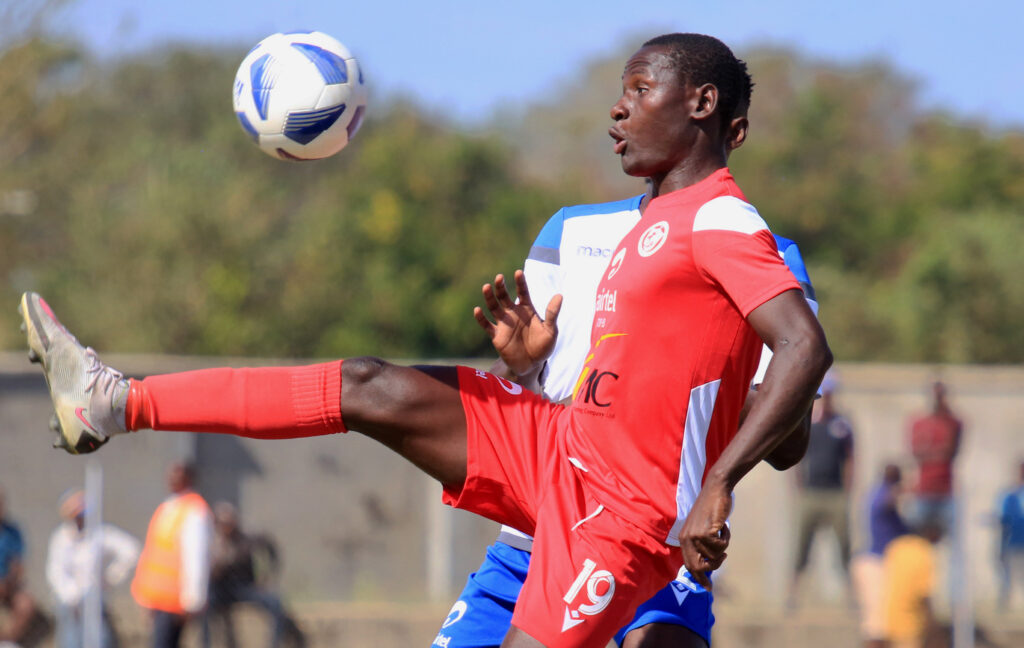 Nyasa Big Bullets conceded in the second half to draw 1-1 with Karonga United in the return leg of the Airtel Top 8, but The People’s Team advanced to the semifinals with a 1-8 win on aggregate on Saturday afternoon.

Going into the match with a 0-7 goal advantage from the first leg, the match was further put beyond the Ingwinas’ reach when Hassan Kajoke scored with his first touch in the 5th minute of the match at Karonga Stadium.

Knowing already that the odds were favouring Bullets, Kalisto Pasuwa made several changes to his squad, with the likes of Babatunde Adepoju, Gomezgani Chirwa, Chimwemwe Idana, Precious Sambani and Patrick Mwaungulu all rested when he used mostly his fringe players.

On the other hand, the hosts needed to score eight goals for them to progress to the next round, a task which was just too big for Christopher Nyambose’s men.

The People’s Team opened the scoring as early as the 5th minute when the hosts failed to beat an offside trap and Kajoke was at the receiving end of Yamikani Fodya’s long ball before slotting home past Lloyd Munthali who was defenceless, putting the game at 0-8 on aggregate.

The visitors had another chance just after the quarter-hour mark when Lanjesi Nkhoma played Thomson Magombo through to the offensive zone, but the midfielder saw his effort saved by Munthali before it bounced off to Kajoke who was slow to react from the rebound as he allowed Eric Atsigah to make a timely intervention.

The pitch was bumpy and dry and the only way for Bullets, who could hardly complete five passes, was to use secondary balls to adapt against an opponent who had mastered the art of playing at such a surface.

Slowly, Karonga started taking the game to Bullets and they could make some passes inside the middle of the field but unlocking John Lanjesi’s-led back-four proved too difficult for them.

With the half-hour mark played, Nyambose brought in Sherrif Shamama for Henry Chiwaya to try to force something out of the game and it was this change that made Bullets sweat for their money as Shamama caused havoc with his runs, especially to the left flank where he was operating.

32 minutes into the half, Richard Chimbamba was called into action when he left his line of defense to clear a dangerous ball which came from Josiah Duwa.

With five minutes left to play, the hosts almost pulled level when Bullets defenders were caught in the mix and failed to clear Mphatso Kamanga’s long ball into the box which found Duwa unmarked, but the winger saw his shot hitting the upright when Chimbamba was already beaten in the line of duty.

The hosts were pressing from all angles and in the last three minutes of the half, they had four back-to-back corner kicks which were cleared by the defending champions and that was all for the half.

In the second half, Ingwinas mostly used their wingers to advance into the final third but Fodya and Nickson Nyasulu kept them at bay, neutralizing every dangerous movement and this suffocated Shamama who couldn’t receive balls in the offensive zone.

However, Karonga United had an opportunity to level in the 53rd minute through Kamanga who failed to connect home a well-taken freekick by Bobby Longwe.

At the other end, Bullets created their first goal-scoring opportunity in the 60th minute when Nkhoma made an excellent pass to Kajoke who was found in a one-on-one situation with the goalkeeper but his effort went straight at the shot-stopper, who had come out of his defensive line.

In the 62nd minute, Pasuwa brought in Righteous Banda for Magombo to try to regain the central midfield that was mostly dominated by Kamanga and Duwa.

After pressing, the hosts were able to level in the 63rd minute from a corner kick.

The first set piece from Shamama was connected well by Kamanga after Chimbamba misjudged the ball which he failed to stop, but he had Precious Phiri to thank as he cleared the ball before crossing the line for another corner kick.

It was from the second corner kick from which Kamanga could not be stopped as he connected into the net, beating Chimbamba from the far post into the top corner,1-1.

Pasuwa was fighting for a clean record heading into the semis and sensing how dangerous the hosts were making advances into the offensive zone, he had to introduce Misheck Seleman, Mphatso Magaleta and MacFarlane Mgwira for Kabichi, Lungu and Phiri in the 73rd minute.

The hosts had an opportunity in the 76th minute from a set piece which was quickly taken by Shamama but his long-range shot was easily saved by Chimbamba.

The last ten minutes saw Bullets defending with caution whilst their opponents threw everything upfront to get a goal and eventually beat Bullets but it was never meant to be as the visitors progressed to the last four with a massive 1-8 goal aggregate.

The People’s Team will wait for the winner between Kamuzu Barracks and Silver Strikers who will meet in the second leg of the quarterfinals phase next week following a 1-1 draw in the first leg.