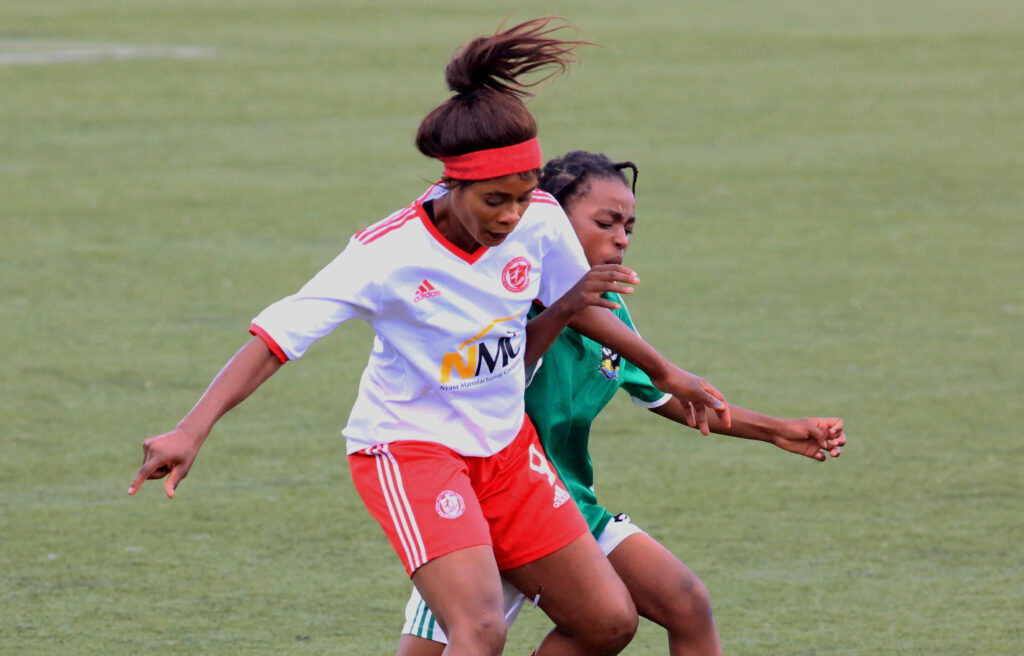 Our current second top scorer, Vanessa Chikupila, who has 39 goals, opened the day’s scoring in the first minute when she freely dribbled past the opponents’ defenders to register her name on the scoresheet.

Within 10 minutes into the game, Chikupila and Mary Chavinda nearly tripled the scores. Still, the goalkeeper Bridget Malema was not going to take defeat without a fight, making four crucial saves in the opening minutes of the first half.

In the 11th minute, a penalty kick was awarded to Bullets after Chikupila was fouled in the area and Chavinda stepped up to open her scoring on the day.

Shira Dimba should have made it three eight minutes later, unfortunately, her attempt went flying over the crossbar, before Chikupila saw her effort in the palms of the goalkeeper in the 21st minute.

With a pass from Pililani Malora, our leading scorer, Chavinda grabbed her second goal when she headed home in the 28th minute. Five minutes later, Fauza Mohammad showed her solo brilliance when she dribbled past forwards the opposition from outside the area and found the back of the net, 4-0.

Malora, Chavinda, Dimba and Chikupila were just too good for the opponents’ backline as they kept coming wave after wave to torment Attu Bullets and at the end of the opening half, Maggie Chombo’s ladies were 8-0 up.

Chikupila was definitely on fire as she commenced the second half by completing a hat-trick two minutes into the final period to score the ninth goal of the day.

Defender Emily Jossam registered her name on the score sheet in the 49th minute when she beautifully headed the ball home to make it 10 for our female side.

Attu Bullets came close in the 51st minute but our goalkeeper Martha Banda denied the visitors a consolation goal with a brilliant save.

53 minutes into the match, Chavinda completed a great move when the ladies brilliantly built from the back to set the forward who notched her fourth goal of the day and eleventh for the team.

Bullets Women suffered a blow when Malora sustained an ankle injury in the 55th minute and the no.7 was replaced by Linda Nyangu.

Tendai Sani registered her name on the scoresheet in the 63rd minute and she should have completed a brace a minute later, but Beatrice Makoka denied the midfielder as she blocked her effort.

Chikupila scored our 13th goal of the afternoon as she oozed past her opponents and completed her haul on the afternoon before she was replaced by Caro Majamanda in the 68th minute.

The ladies beautifully exchanged passes to tear apart Attu Bullets’ defence before Mohammad got hold of the ball and raced near-post where she pressed and scored the 14th goal of the match in the 73rd minute.

It should have been 15 two minutes later but the visitors were relieved when Lyna James failed to score a penalty kick following a foul in the box. Malema saved her weak spot-kick. But this was no setback for our women as Dimba finished what Chavinda had started and scored a brace in three minutes, 16-0.

With a cross from Sani, Chavinda closed the day’s scoring with her beautiful shot in the 83rd minute. Chombo substituted Dimba for Asiyatu George in the dying minutes of the final half and at the end of 90 plus three additional minutes, it was Nyasa Big Bullets Women 17 and Attu Bullets 0.

Bullets Women continue topping the standings of the league table with 36 points from 12 games and have scored 142 goals. They remain with two games to wrap up the 2022 FAM Women’s Football Southern Region League campaign.