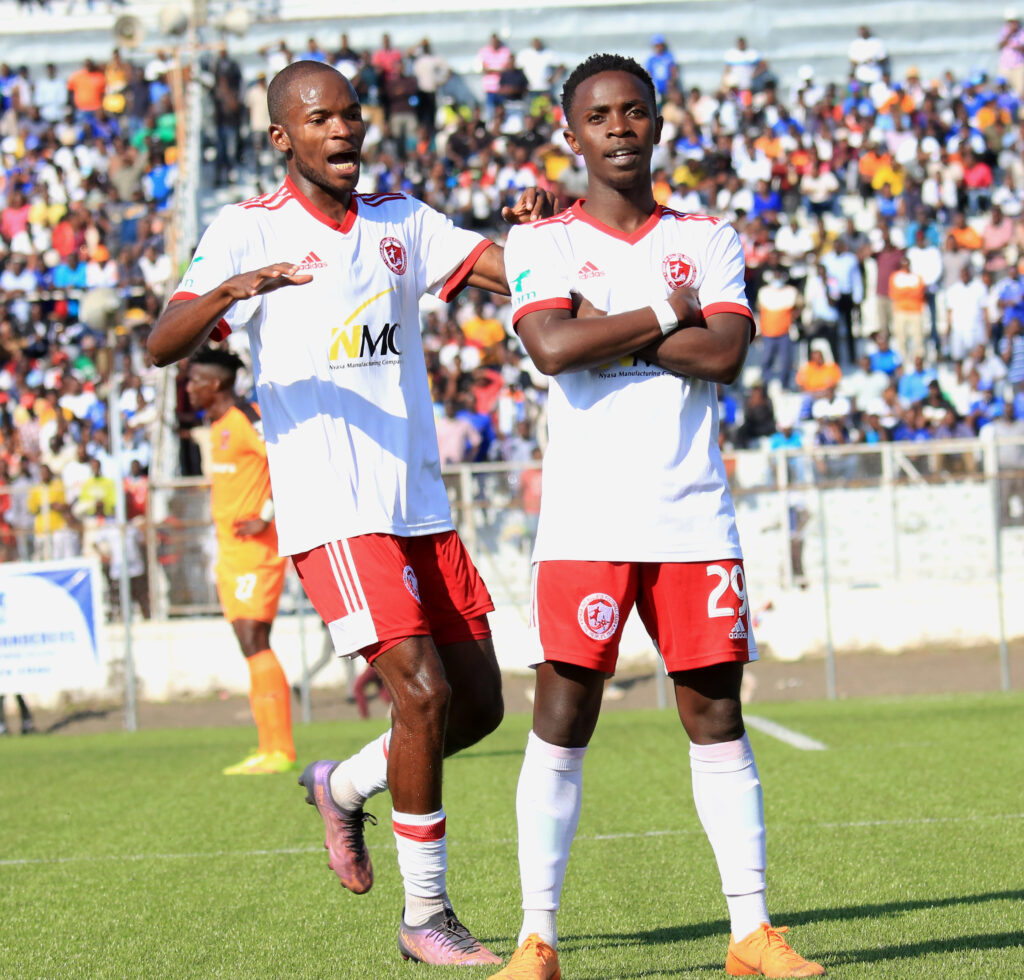 In a keenly contested Blantyre derby, Nyasa Big Bullets twice gave away the lead to draw 3-3 against Mighty Mukuru Wanderers in the TNM Super League at the Kamuzu Stadium on Sunday afternoon.

When Chimwemwe Idana re-established our two-goal lead four minutes into the second half, it had seemed that The People’s Team had put the derby to bed, but the Nomads’ late second half resurgence saw them salvaging a point.

Bullets fans, who had been largely entertained on the day, were muted in disappointment in the final minute for witnessing the derby glory slip out of Maule’s hands in a dramatic fashion.

Kalisto Pasuwa’s men could not have started any better on a hot afternoon in Blantyre as Patrick Mwaungulu and Chimwewe Idana both forced the Nomads’ goalie, Pilirani Mapira, into some fine saves inside ten minutes. The aim of Bullets’ attacking force was apparently to get the first goal of the game as Babatunde Adepoju, Lanjesi Nkhoma and Mwaungulu all pushed rapidly into the box with urgency and threat.

After 20 minutes, given the high temperature on the day, the referee sent the two teams for a water break which seemingly did the Nomads, who were under immense pressure, a timely favour. Nonetheless, soon after that water break, we finally had our breakthrough. And it was one we truly deserved after enjoying a flying start to the game.

Enerst Petro dispossessed Felix Zulu at the middle of the park and ran towards the box before sliding the ball through to Nkhoma, whose strike went nestling into the bottom left corner of the net to send Bullets fans, who turned out in massive numbers, into rattling celebrations. We had started the game on fire but our opener raised its flames even higher.

Five minutes thereafter we doubled our lead. From the left back, Precious Sambani spread a long cross-field ball to the right flank where Mwaungulu had to challenge Ted Sumani and the youngster won the ball, did a trick, and fired a powerful low shot to the far post to make it 2-0.

The Nomads carried no threat after conceding twice inside the half of an hour, but somehow pulled one back as the tie went towards halftime when goalkeeper Clever Mkungula fouled former Bullets striker Chiukepo Msowoya inside the box and the Nomads won a penalty which their captain Stanley Sanudi converted to make it 2-1.

Mental resolve was shown by Maule who, unfazed by the Nomads’ goal, protected their lead until the half-time break.

Instantly after the restart, Bullets superbly re-established their two-goal lead through Chimwemwe Idana. The 2021 TNM Super League Player of the Season, took things into his own hands as he wriggled through the Nomads’ defense into the box before unleashing a sumptuous strike which went past Mapira, leaving him rooted to the spot.

Kalisto Pasuwa’s men seemed they had cut the Nomads’ throat with that goal but the hosts, inspired by their second-half substitutions, found the way back into the match. In the 74th minute defender Miracle Gabeya, another ex-Bullets player, powerfully nodded in a Vitumbuko Kumwenda corner-kick to make it 3-2.

With three minutes to go before the final whistle, Muhamad Sulumba, who started from the bench, got the Nomads level with a well-guided header.

Revitalized, the Nomads looked for a late conquest but Bullets held on, refusing to let everything slip. 3-3 it finished, as the Nomads benefited from our second-half defensive collapse.

Provided the manner in which Bullets surrendered their lead last weekend to win 4-2 on post-match penalties following a 4-4 finish in regulation time against Moyale Barracks in the FDH Bank Cup and today against the Nomads, Pasuwa must be gutted with this uncharacteristic defensive trait of his men.

The result still leaves Bullets 16 points above the Nomads and most importantly maintains their comfortable lead at the top of the TNM Super League table with 49 points from 19 games as Blue Eagles, placed second, are on 39 points from 18 games.

Coming next for Bullets after this six-goal thriller Blantyre derby is the trip to Mzuzu next weekend for an encounter against Chitipa United in the quarter-finals of the FDH Bank Cup.