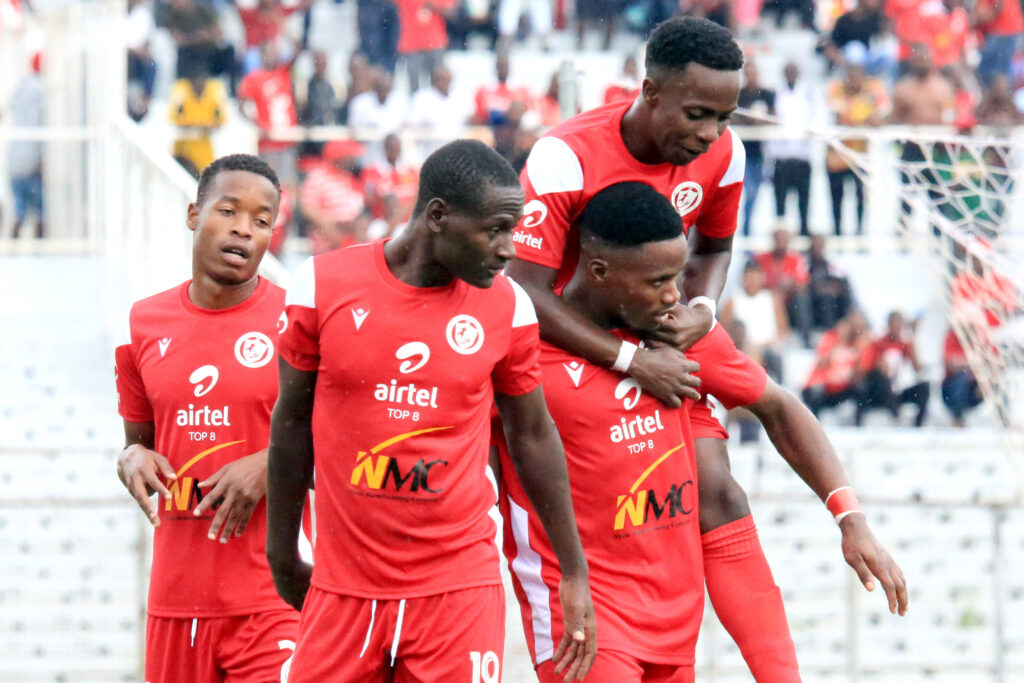 Nyasa Big Bullets began the defence of the Airtel Top 8 Cup with a comfortable 7-0 hammering of Karonga United in the quarterfinal first leg played at Kamuzu Stadium on Saturday afternoon.

Kalisto Pasuwa made some changes to the side that lost 1-0 to Mafco last week, with Clever Mkungula, Hadji Wali, Thomson Magombo and Lanjesi Nkhoma all given starts for Richard Chimbamba, Kesten Simbi, Ernest Petro and Babatunde Adepoju.

Bullets’ destroyer-in-chief on the day was Nkhoma who netted a brace, with the other goals coming from Anthony Mfune, Babatunde, Stanley Billiat, Henry Kabichi and Precious Phiri.

From the word go, the signs were clear that Bullets, coming from their first-ever defeat in domestic competitions this season, were hungry for goals and with the second leg coming in three weeks, Pasuwa’s men attacked from all angles in search of an opener.

Just a minute into the match, Nkhoma saw his ferocious shot outside the penalty box hitting the post.

Moments later, Nkhoma was at the receiving end of a fantastic cross from Gomezgani Chirwa but the forward failed to connect home when the visitors’ defence was in tatters.

The hosts were pressing from all angles and Mfune would have broken the deadlock only for the striker to miscue his effort when he was set through by Patrick Mwaungulu, who returned to the starting eleven after missing out on last week’s action.

It was in the 12th minute when Bullets brilliantly got the opening goal.

Nickson Nyasulu started the move with a long pass to Mwaungulu who found Thomson Magombo to release Mfune and the forward simply guided the ball into the back of the net with his left foot to punish his former team, 1-0.

This was the beginning of more trouble for the visitors who were now destined to receive the baptism of fire from the dominant forces.

But despite conceding, the Northern Region-based outfit pressed in search of a quick equalizer and they should have had one when Mphatso Kamanga managed to taunt Bullets’ backline before splitting them apart, but his powerful shot was well saved by Clever Mkungula who also returned to the starting eleven after recovering from flu.

In the 27th minute, Josiah Duwa exchanged passes with Sherriff Shamama who set through Geoffrey Kadzitche and the forward released a very powerful effort which Mkungula again managed to stop brilliantly.

Bullets doubled their lead on the half-hour mark through Nkhoma who slotted home from Gomezgani Chirwa’s brilliant pass into the box, 2-0.

Pasuwa’s side suffered a blow in the 35th minute when Mfune sustained a groin injury and was replaced by Babatunde.

The hosts put the game beyond ‘Ingwina’ when Eric Atsigah’s led back-four failed to clear a long ball from Precious Sambani into the box and landed straight at Nkhoma who calmly controlled the ball, passed it to Mwaungulu and the attacker drove it back to the number 19 who curled it to the far post, 3-0.

The first-half action came to an end with Bullets in the lead with a 12-goal attempt, eight on target and only three at the back of the net. Their opponents had only four goal attempts with only two on target.

Kabichi, Billiat and Phiri all come from the bench to score

The second half began similarly to the opening period as Babatunde struck an effort from the edge of the box that missed Lloyd Munthali’s upright with an inch.

The visitors made a triple substitution three minutes after the recess when Munthali, Hygiene Mwendepeka and Kadzitche were replaced by Ramadan Ntafu, Gift Mwazembe and Allen Chihana.

Bullets crafted another chance for themselves in the 52nd minute when Frank Willard used his skill to send a million-dollar pass to Babatunde who used his pace to get the better of Atsigah before beating the advanced Mwazembe to power the ball home, 4-0.

Kamanga was at it again with an ambitious long-range effort that went over the bar when Bullets’ Hadji Wali-led defence was caught napping in the line of duty.

With another game coming on Wednesday, Pasuwa introduced Kabichi, Ernest Petro and Billiat for Chimwemwe Idana, Magombo and Nkhoma as he continues managing his squad.

76 minutes on the clock, Billiat used his pace to outrun Atsigah and with Babatunde in front of him, the winger made an impassive decision when he decided to shoot from a very unfamiliar position only to see his weaker shot going straight into the hands of Mwazembe.

The floodgates were well and open for Bullets from 82 minutes to 90 when The People’s Team scored three more goals.

Billiat added a fifth goal in the 82nd minute with a simple finish. Coming from the middle of the park, Sambani spotted Babatunde up and delivered a long pass towards the attacker, who eventually directed the ball to Billiat and the winger just needed a simple touch to put the ball into the net.

Things just kept getting better for Pasuwa’s side as Bullets made it six shortly through Kabichi, who released a volley from outside the area to beat Mwazembe to the far bottom corner.

Precious Phiri, who came in for Chirwa made it seven in the 90th minute when he confidently tapped in from a loose ball following Karonga United’s failure to clear a corner kick delivered by Mwaungulu.

The defending champions controlled their lead with relative ease and their opponents consigned themselves to defeat.

Nickson Nyasulu, who partnered Hadji Wali in central defence, was picked Man of the Match.

With our next fixture of the Airtel Top 8, the return leg, set to be played on 26 November at Karonga Stadium, the People’s Team will switch focus to the TNM Super League and will on Wednesday travel 400 miles away to Mpira Stadium to face Waka Waka Tigers.