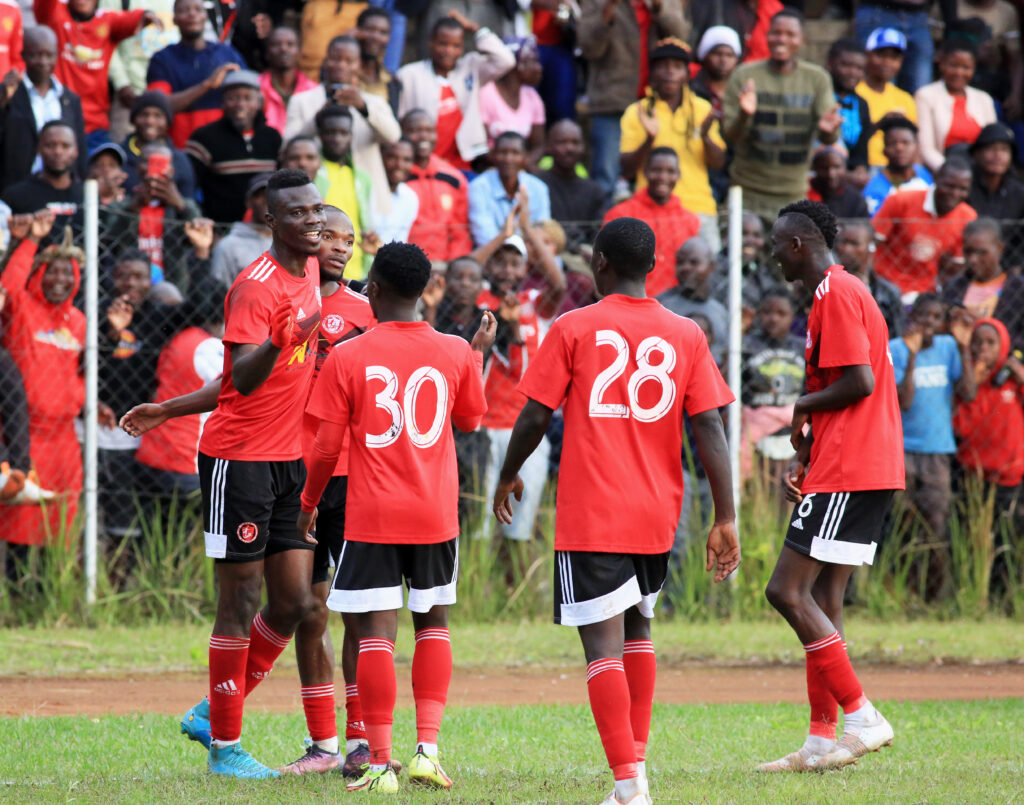 Nyasa Big Bullets eased into the next round of the FDH Bank Cup with a comfortable 3-1 victory over Sable Farming at Mulanje Park on Sunday afternoon.

It was a second competitive meeting between the two sides in a space of fifteen days, with Bullets looking to secure a second consecutive victory over the Chiradzulu-based team, which they had overcome in the league in our final game of the first-round at Kamuzu Stadium.

In the absence of the head coach Kalisto Pasuwa, assistant coach Peter Mponda made two changes to the side that won the league match, with Stanley Billiat and Nickson Nyasulu coming in for Patrick Mwaungulu and Hadji Wali.

Bullets’ first shot on target came through Lanjesi Nkhoma, whose deflected cross into the danger zone hit the upright and was cleared to the safety by White Kitseni.

And against the run of play, the hosts, who were lagging behind in terms of ball possession, took a surprising lead in the 20th minute through Chifundo Ngapenga, who capitalized on a defensive relapse from The People’s Team, 1-0.

Billiat had an opportunity to equalize when he got on the end of a beautiful pass from Babatunde Adepoju, however the winger could not direct his shot into the net with Fletcher Jamali already beaten in the line of duty.

On 28th minute, Babatunde and Chimwemwe Idana exchanged passes to find Ernest Petro clear on a shooting space but the midfielder was unfortunate as he saw his goal-bound shot well blocked by Sheban Kassim, who was very outstanding for the hosts in defence.

At the other end, Franklin Mlimanjala delivered a very dangerous cross into Bullets’ box from a freekick which was cleared by Kesten Simbi.

Mponda made a substitution ten minutes before the break, introducing Macfallen Mgwira for Billiat as Bullets continued searching for an equaliser as the clock was ticking fast for the visitors.

With 40 minutes played, the hosts were dealt with a massive blow when Jamali sustained an injury after he collided with Mgwira in an aerial challenge.

This forced MacDonald Mtetemera to replace the injured goalkeeper with Christopher Mikuwa, who made his first save on 43rd minute to deny Babatunde from finding the back of the net.

On the dot of 45 minutes, Bullets leveled. It was brilliant work from Babatunde, making a great run into the box before setting Nkhoma on the back post and the forward could not afford a mistake but pounce to beat Mikuwa in the line of duty, 1-1.

In the second half, Bullets came out blazing and attacked from all angles through fullbacks Precious Sambani and Gomezgani Chirwa, who added numbers in attack, making life very difficult for Mtetemera’s back four.

In the 48th minute, a cross from Mgwira into the box was flicked by Idana to Petro who could only see his header going over the crossbar.

Babatunde was next to get into a goal-scoring position in the 51st minute, following a move started by Idana near the halfway line, where Petro, Mgwira and Chirwa all had touches before the Nigerian miscued his attempt for a goal kick.

Much of the traffic in the opening minutes of the final half continued to be directed towards the hosts, but Sable’s defense kept on making timely clearances to frustrate the hosts.

Bullets took a lead in the 53rd minute through Chirwa, who had started a move down the right before releasing Idana who wasted no time by sending the ball to Babatunde whose connection was fumbled by Mikuwa and landed in the path of the wingback to drive his shot past the defenseless ‘keeper and send the stadium into frenzy, 1-2.

This goal saw Mtetemera making a double substitution by introducing Emmanuel Lino for Simeon Singa, who wasn’t having a good day as he was closely monitored by Blessings Mpokera in the defensive midfield for The People’s Team.

At the other end of the field, Lino sent a pin-point cross to Ngapenga, whose flick towards goal went straight at Richard Chimbamba.

Babatunde had a clear goal-scoring opportunity in the 70th minute when he was found in a one-on-one situation with Mikuwa, but surprisingly, his chip went wide with the goalkeeper already beaten.

Mwaungulu was then introduced in the 72nd minute, replacing Petro in attacking midfield.

Bullets kept on creating more scoring opportunities but twice, Babatunde saw his powerful shots going over the crossbar in 76th to 78th minutes.

In the 79th minute, Innocent Chipolopolo and Humphrey Chimwaza replaced Christopher Gototo and Stain Patrick for Sable Farming as they were desperate to find the leveler.

The visitors were then reduced to ten men in the 80th minute when Nyasulu was shown a second yellow card after he threw the ball away when referee Zebron Lengani had given the hosts a freekick inside Bullets’ half following the defender’s foul on Mlimanjala.

Despite losing a man, The People’s Team added a third goal in brilliant style.

Babatunde started the move with a cheeky pass before releasing Mgwira, who then controlled the ball and set the forward to head straight into the net, 1-3.

The forward was stretchered off in the 83rd minute after picking a knock and was replaced by Hassan Kajoke, who had his powerful strike from an offside position coming off the upright moments after his introduction.

Resilient defense was required from the visitors near the end, and they produced just that to hang on to their 1-3 advantage, clinching an important victory and book a place into the 2022 FDH Bank Cup round-of-16 against Moyale Barracks, who beat Ngwanje FC 2-1 on Sunday.