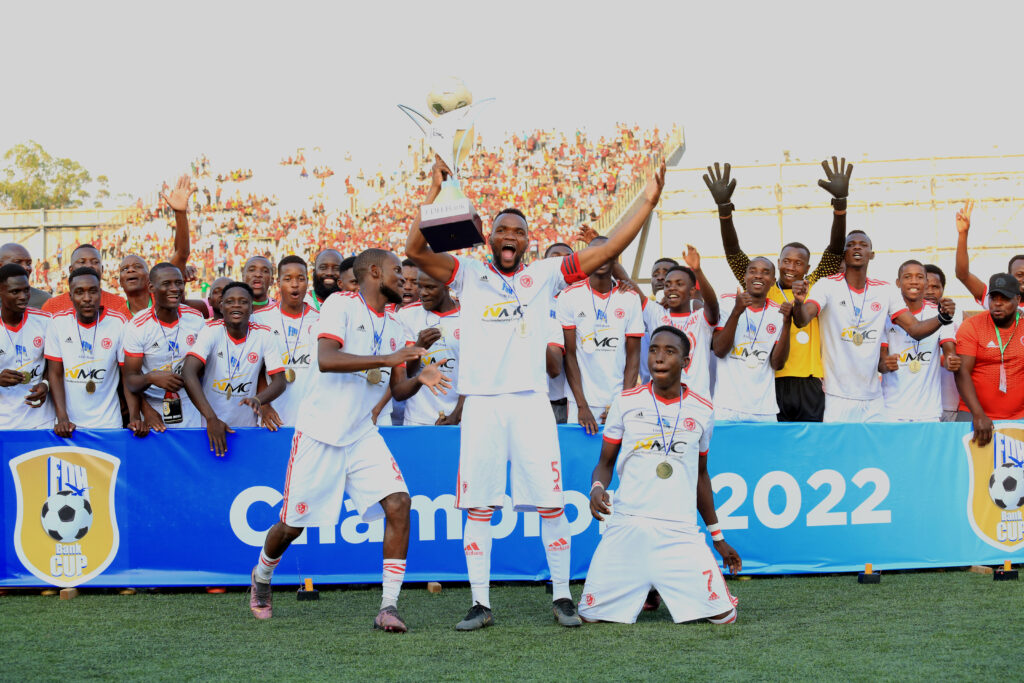 Nyasa Big Bullets have won their first FDH Bank Cup following a 3-1 victory in a landmark final against their reserves side on Sunday at the Kamuzu Stadium.

A strike from Babatunde Adepoju in the 12th minute for the main team and Happy Mphepo for the reserves in the 44th minute made a mouth-watering first half which ended 1-1.

Chimwemwe Idana and Antony Mfune scored a goal each in the second half to take Kalisto Pasuwa’s men to a 3-1 win over their juniors.

Young Bullets had been defiant on their way up in this competition but they were off to a jittery start in the final, looking out on their feet to contain the early dominance of their seniors.

Having bossed the early proceedings, eventually, the first team sliced open their reserves in the 12th minute and got the opener through Babatunde, who took his goal tally in the competition to five in five matches with a simple finish after some suicidal defending from Enos Chatama’s boys.

The opening goal of the match might have put the seniors in front but it left the reserves awakened as they started driving forward with verve.

With the clock ticking towards the break the youngsters won a free-kick on the left flank after Chikumbutso Salima was toppled down by Gomezgani Chirwa. With his left foot, Chrispine Mapemba executed a teasing free-kick which almost went in but Clever Mkungula fended off the danger with a fantastic fingertip save. Nonetheless, the cleared ball went into the path of the 17-year-old Mphepo, who sent the ball into the back of the net and saw his equalizing goal, his first ever in the Bullets colours, cheered by the vociferous Bullets fans who were behind the reserves side on the day.

At the start of the second half Pasuwa, looking to up his side’s game, withdrew Lanjesi Nkhoma and Patrick Mwaungulu for Stanley Biliati and Ernest Petro.

And eventually, the changes paid dividends as the current TNM Super League leaders started to boss things around until they re-established their lead in the 66th minute through Chimwemwe Idana, who showed some ice-cold finishing after being sweetly set by Gomezgani Chirwa with a through ball.

At 2-1, the reserves could not be counted out of the tie as they looked like they could stage another comeback.  Salima and Emmanuel Saviel had curved open the main team on three occasions but both lacked the final decisive touch of the ball in very good goal-scoring positions.

Already behind, the reserves were dealt with a further blow when Felix Demakude, who had been a spark on the day, was stretchered off the pitch with a muscle injury.

There was no mercy whatsoever from their big brothers however as the in-form Mfune got the third for Bullets with a neat header from a Gomezgani Chirwa cross in the 77th minute to make it 3-1.

Seemingly that Mfune goal killed any pulse of belief in the youngsters. They never looked like coming back as they were put on the chopping board by their seniors who passed the ball around the way they fancied for the final minutes.

Nyasa Big Bullets are now only the second team to have won the FDH Bank Cup after Silver Strikers won its inaugural edition last year. It is Pasuwa’s fifth national silverware after joining The People’s Team in 2018. He won the Airtel Top 8 last December and he is eyeing the fourth straight TNM Super League championship.

This was only the second time in five years for the reserves to register a defeat at the Kamuzu Stadium. Before losing to their senior side, the youngsters have been dominating their Premier Division tier, sweeping all the trophies coming their way.

The final featuring two sides under one roof proved a moment when Bullets’ rising dynasty in Malawian football was put on display on such a glamourous stage the official sponsors FDH Bank set up today at the Kamuzu Stadium.

The 2022 FDH Bank Cup winners, Nyasa Big Bullets will now look to win two of their remaining five games in the TNM Super League to defend the championship. They wait to welcome Dedza Dynamos in their next league match.

What follows for the reserves now is a home match in the round-of-16 of the Nyasa Capital Finance Cup on Thursday.