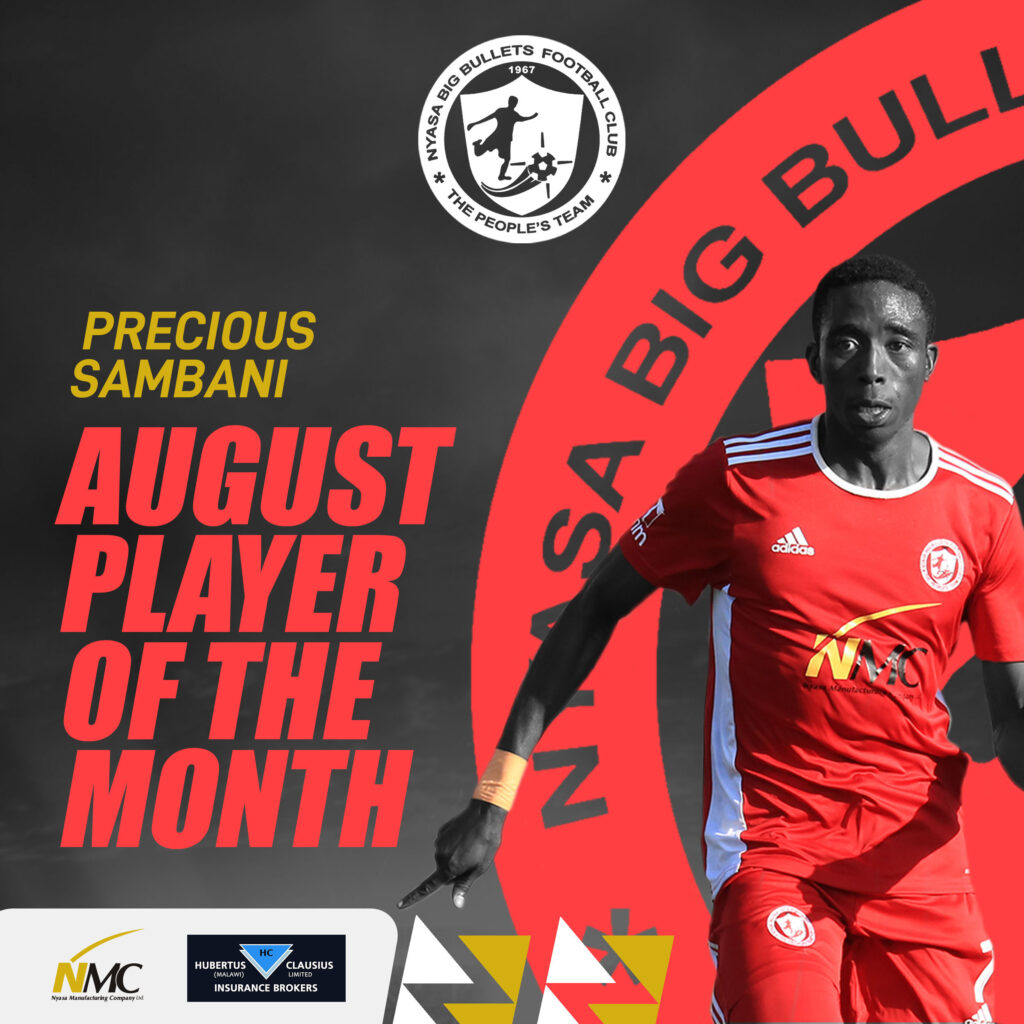 It was a precious August for Precious Sambani, who, just like in the month of July, has been voted Bullets’ Hubertus Clausius Player of the Month.

The left-sided wingback scored four times in the five games Bullets played in the month of August and that’s simply outstanding from a left-back, who was nominated alongside defending midfielder Frank Willard and forward Babatunde Adepoju.

Sambani’s first match in the month of August was away at Ekwendeni Hammers. In the 21st minute of that TNM Super League fixture, he nodded home a Patrick Mwaungulu’s corner-kick to break the deadlock for Bullets who emerged 2-0 victors at the end.

Five days later, The People’s Team welcomed Moyale Barracks at the Kamuzu Stadium in the round-of-16 of the FDH Bank Cup, which turned out to be an eight-goal thriller Bullets won 4-2 on post-match penalties.

Part of that thriller was painted bright by a spectacular strike from Sambani just at the stroke of half-time to ensure that Maule went for a break with a 2-0 lead.

Not from a great-scoring position, Sambani produced some moment of magic, executing an outside-foot strike from outside of the area to smash the back of the net, leaving the goalkeeper rooted to the spot and not knowing what had just happened.

Against Mighty Mukuru Wanderers in the Blantyre derby, which ended in a 3-3 draw, Sambani played his significant part.

He also led Bullets to a 2-0 victory over Chitipa United on 20 August in the quarter-finals of the FDH Bank Cup away at Rumphi Stadium to set up the third Blantyre derby of the season.

The glistening and twinkling of Sambani’s form continued in the month of August as the Malawi international was outstanding once again when Bullets swept aside TN Stars 8-0 at the Kamuzu Stadium.

In that massacre, Sambani turned into the net a Mwaungulu corner-kick and scored his second and the fifth goal for Bullets on the day with a perfect low connection from outside the area.

To wear the August crown, Sambani has earned more votes than he did last month when he also won the award. Having won 86% of the votes in July, the Bullets vice-captain has now won 91% of the votes. Babatunde Adepoju, got 7.2% while Frank Willard got 1.5% of the votes.

This is for the first time the Hubertus Clausius Player of the Month award was won by the same player two months in a row.