September’s Player of the Month nominees 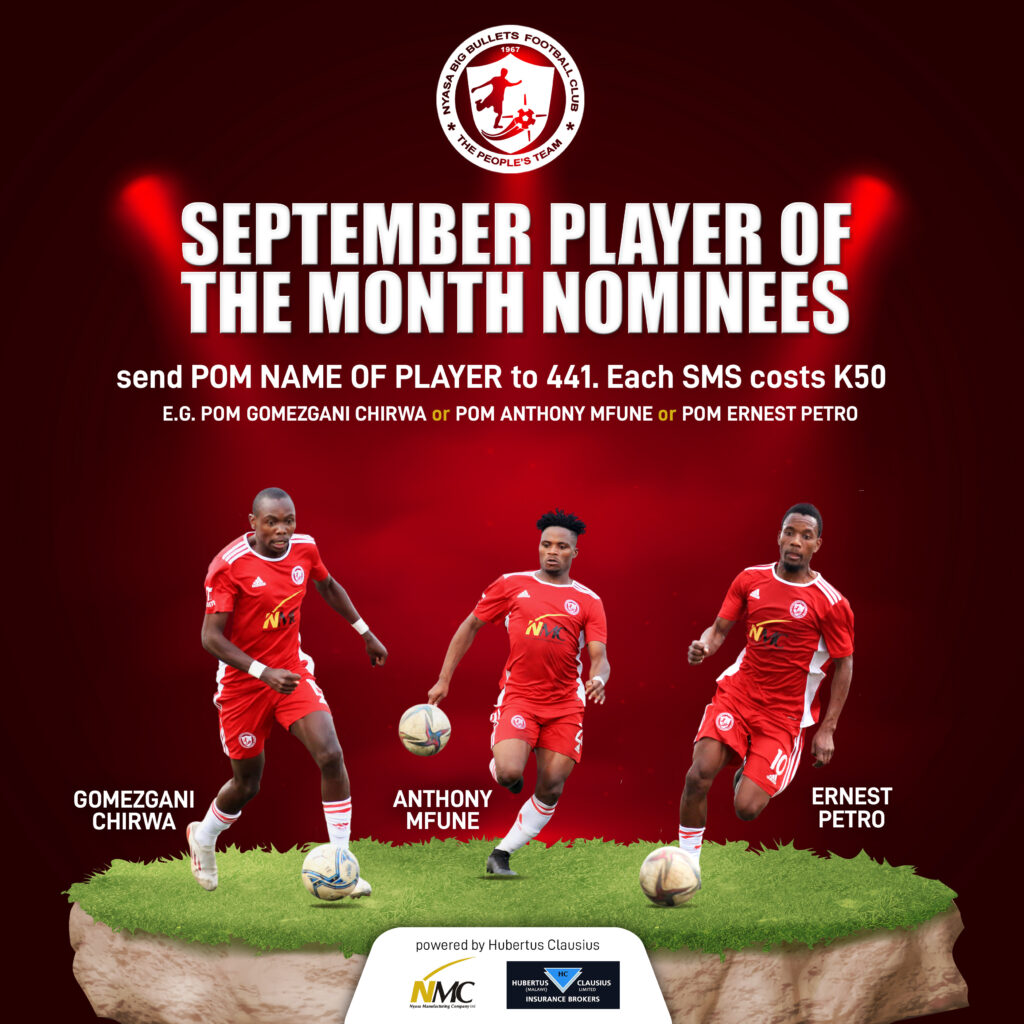 Antony Mfune, Gomezgani Chirwa and Ernest Petro are up for the fifth Hubertus Clausius Player of the Month Award.

The trio, shortlisted by the Nyasa Big Bullets technical panel, have made it on the nomination list after their remarkable performances in September.

The overlapping defender was involved in all four games The People’s Team played in September, featuring in both legs of the 2022 TotalEnergies CAF Champions League against Simba SC at home and away.

He was effective in his role in the 3-1 home victory Bullets registered over Red Lions. To wrap up his September displays, Chirwa scored a goal and got an assist in Maule’s big 4-0 win in the Blantyre derby over Mighty Mukuru Wanderers at the Bingu National Stadium to secure a place in the FDH Bank Cup Final.

Antony Mfune has been sparkling for the defending champions since he broke into Kalisto Pasuwa’s starting XI.

After netting his first hat-trick in Bullets colours against TN Stars end of August, the forward was also on the scoresheet and provided an assist against the Nomads in the third Blantyre derby of the season.

Just like he has been throughout this campaign, the Bullets’ number 10 was a vital player for the defending champions in the month of September.

He was efficiently involved in the two wins Bullets recorded out of the four games they had last month. Petro had been a man in the blue collars for the team, working tirelessly to win us hurtling midfield battles and of course the maximum points in the last two games of the month.

The club’s 411 SMS platform continues to be used to decide the winner among the three nominees. Send POM alongside the Name of the Player to 441 using both Airtel and TNM.

When the winner will be announced

Voting will be allowed until 19 October 2022 and thereafter, the winner will be announced through the Club’s official channels.

While this is the second time for Chirwa to be on the nomination list, Mfune and Petro have received their first nominations since the introduction of the POM award, sponsored by Hubertus Clausius.

The one to get the most of the fans’ votes on this three-man nomination list will be the fourth Bullets player to win the award since its introduction five months ago.

Chimwemwe Idana, Patrick Mwaungulu, and Precious Sambani have already won the award so far, with the latter winning it twice in July and August.