Vote for your December Goal of the Month 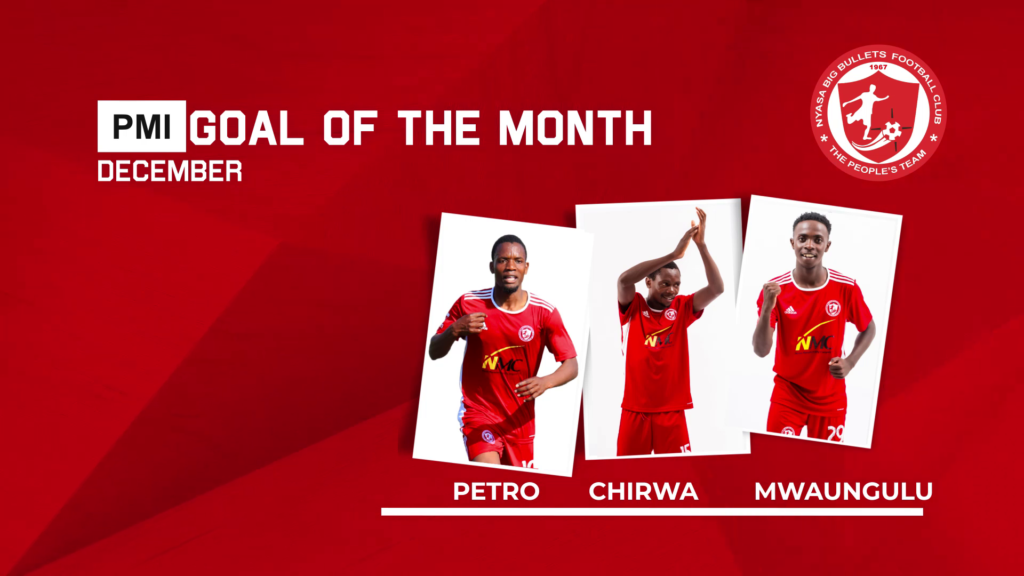 Strikes from Ernest Petro, Gomezgani Chirwa and Patrick Mwaungulu are on the three-man nomination list for the Precious Medical International Goal of the Month Award for December.

Interestingly the strikes running for the award came from the same match The People’s Team defeated Silver Strikers 3-1 in the semi-final of the 2022 Airtel Top 8 Cup on 10 December at Kamuzu Stadium.

The beauty of Chirwa’s strike against Silver Strikers arguably beats the one he won for November’s Goal of the Month award.

Interestingly the build-up to his goal against the Central Bankers is similar to his strike against Moyale. Both are superb illustrations of a deadly team move. Both involve four touches by three players before the ball is buried into the net with some horrific lofted effort darted from the right byline of the pitch.

Nonetheless, the strike against Silver showed exceptional cleverness from the right back. Noticing Silver Strikers goalkeeper Emmas Nyirenda out of his line, the 2022 Bullets Player of the Season darted the ball over the short-stopper into the back of the net at the far post to open the scoring in the tie.

Rarely does he find himself on the score sheet but against Silver Strikers on December 10 he was the one who handed us a two-goal lead at the start of the second half.

The 26-year-old, who has just won the Bullets Best Midfielder of the Season award did it with remarkable smartness.

Beautifully set up by a header from Hassan Kajoke inside the box, the attacker guided the ball past Silver’s three defenders guarding the sticks on the goal line while their keeper took off to cut Precious Sambani’s searching delivery in vain. The positioning and the execution of Petro’s strike make it worthy to be on the nomination list.

To seal the victory for us against Silver Strikers in this year’s Airtel Top 8 Cup semis, Mwaungulu struck the third goal for us.

The just-voted Discovery of the Season was released by Chirwa’s long ball from the back, got unto it on the edge of the box, and ran into the area with Silver’s defender breathing down his neck before coolly beating Emmas Nyirenda in a one-on-one situation to make it 3-1 with a low composed finish.

Not all keep their stamina and calm as the youngster did in such a moment of tight pressure. Truly the aesthetic resilience and finishing in this strike make it a perfect pick for the contest.

Voting is only available for fans within Malawi using our 411 SMS platform. Send the keyword GOM and the name of the nominated player to 441 via TNM and Airtel networks; each message costs K50. Voting will close on Wednesday, 4 January 2023.