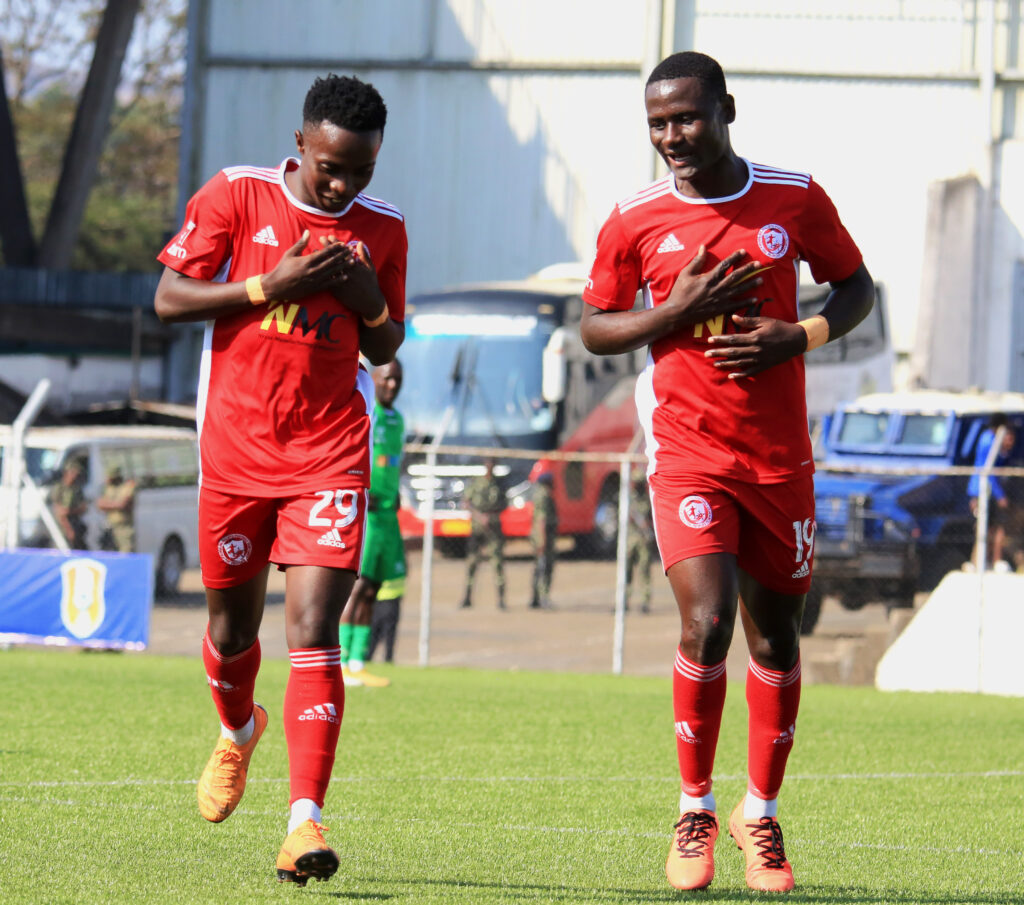 Nyasa Big Bullets have become the eighth team to advance into the quarterfinals of the FDH Bank Cup after beating Moyale Barracks 4-2 on penalties following a 4-4 stalemate in regulation time at the Kamuzu Stadium.

The People’s Team had to surrender their lead three times before their victory at the packed Soccer Mecca.

Bullets have joined Extreme FC, Kamuzu Barracks, Chitipa United, Nyasa Big Bullets Reserves, Changalume Barracks, Mighty Wanderers and Blue Eagles FC in the next round, thanks to Richard Chimbamba’s heroics during the shootout.

The visitors created the first clear chance as early as the sixth minute, with Lloyd Njaliwa seeing his thunderous shot from the centre of the penalty box well saved by Chiyenda for a corner kick that Bullets easily defended.

Bullets then launched a counter-attack from the right flank, which saw Gomezgani Chirwa releasing Chimwemwe Idana before sending a brilliant cross into the box to Nkhoma, who made a first-time connection to beat Simeon Harawa in goal for the Mzuzu-based military side.

The goal placed Moyale Barracks under pressure and they should have been 2-0 down in the 16th minute when Babatunde Adepoju produced a powerful header that was saved by Harawa.

But the home team was able to double their lead in the 19th minute when Patrick Mwaungulu pressed into the attacking zone before exchanging passes with Babatunde, who later set the winger clear on goal and the youngster wasted no time by releasing a thunderous shot on the edge of the penalty box to beat Harawa into the bottom corner, 2-0.

Babatunde saw his volley cleared away before crossing the line by Maneno Nyoni.

The People’s Team, through Nkhoma, kept on pressing and nearly scored a third goal in the 34th minute when the forward produced a powerful shot which forced Simfukwe into action before hitting the woodwork but Mwaungulu placed his attempt from a rebound wide.

At 35 minutes, The Lions of Kaning’ina started their resurgence when Gastin Simkonda finished off Njaliwa’s deflected pass into the net, 2-1.

38 minutes into the half, the match was level. A cross from Raphael Phiri found Njaliwa unmarked and the midfielder made no mistake to head past defenceless Chiyenda into the net, 2-2.

But Bullets responded very quickly through Sambani’s beautiful goal in the 43rd minute when he curved well from the centre of the box to beat Simfukwe to restore the lead and that was all for the opening half.

Pasuwa brought in Frank Willard for Singo to fix the midfield that kept on losing possession to the visitors.

Bullets came close in the 48th minute through Babatunde, who forced Simfukwe into producing a save from his shot that lacked power and pace.

Njaliwa came back to haunt Bullets again in the 52nd minute when he scored from a rebound after Chiyenda failed to stop Brown Magaga’s freekick from the left, 3-3.

The People’s Team created plenty of chances, the latest being Idana who found himself in a shooting space, but the number 8 opted to pass the ball to Mwaungulu, who ended up losing possession to Black Alisen.

Mwaungulu had another opportunity two minutes before the half-hour mark when was again set through by Idana, however, the youngster was slow to make a decision and allowed Alisen to make a timely intervention to keep his team into the game.

In the 63rd minute, Mwaungulu was brought down in the box but the centre-referee Kondwani Kamwendo awarded Bullets a freekick close to the penalty box and it was from this set piece that Pasuwa’s men won a penalty after Alisen blocked the Bullets number 29’s ball with his arm.

Babatunde stepped up and scored to restore Bullets’ lead in the 67th minute.

The hosts almost increased their lead two minutes later when Babatunde produced a stunning run from the left and opened fire, unfortunately the Nigerian saw his effort missing Simfukwe’ left-hand goal post with an inch.

The match was level again in the 72nd minute when Lesman Singini headed home from Magaga’s brilliant cross to beat Chiyenda, 4-4.

This goal gave Moyale Barracks more rhythm and they should have punished the hosts with another heartbreaking goal in the 75th minute when Njaliwa’s header from a corner kick was saved by Chiyenda before Wali’s clearance outside the penalty box.

With seven minutes left to play, Chiyenda was replaced by Chimbamba and Bullets had another opportunity in the 85th minute when Mgwira forced his way into the box before sending a dangerous cross that found Kajoke unmarked, but the forward failed to tap in but blast the ball over the crossbar.

At this stage of the game, penalties were inevitable and Pasuwa introduced Yamikani Fodya for Willard, preparing for the shootout as the clock was ticking very fast for his players who were desperate for the winning goal.

After 90 minutes of play, the referee blew his whistle to mark the end of an entertaining match which produced eight goals in open play and penalties followed.

Fodya was the first to take his spot kick but Simfukwe came out top with a save, sending a clear message to Bullets that it was not yet over and that anything would happen.

Simkonda stepped up and scored his penalty kick before Kajoke made it 1-1 but Moyale Barracks had an advantage after Fodya’s miss.

Bullets came back into the contest when Chimbamba saved Phiri’s penalty, 1-1.

Lanjesi, Idana stepped up and converted their penalties but Magaga saw his spot kick well saved by Chimbamba, handing Bullets a massive advantage going into their last penalty kick.

The arrears were reduced by Alisen but it was too late as Babatunde scored the winning penalty for The People’s Team to sail through to the quarter-finals with a 4-2 victory.

Bullets will know their opponents through a quarterfinal draw which will be done by the Football Association of Malawi this week.