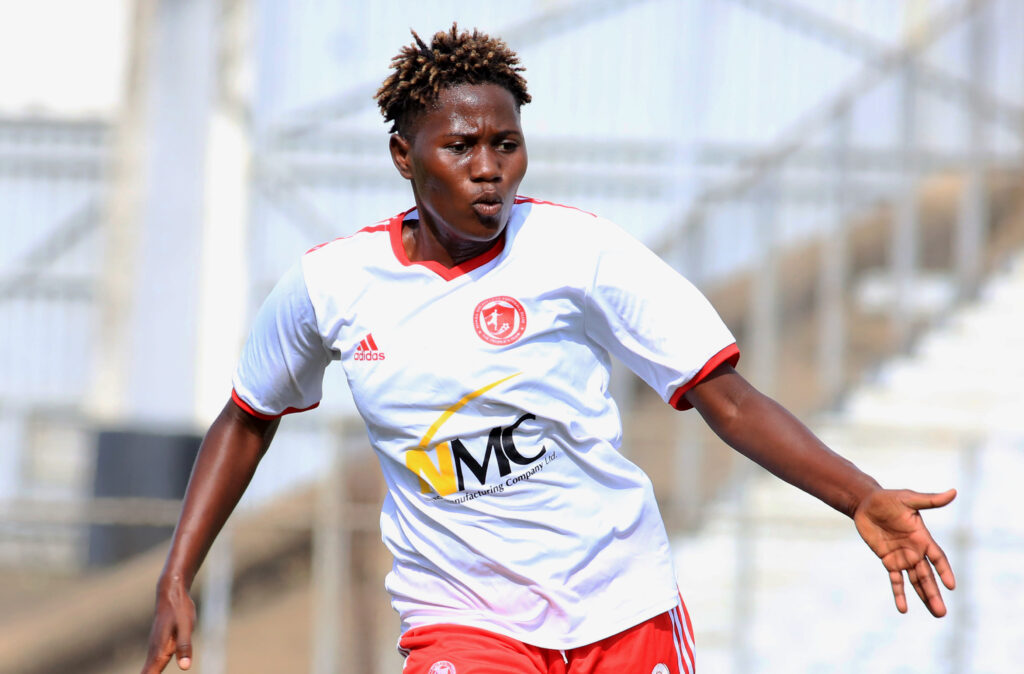 The 2022 season continues to be an impeccable run for Nyasa Big Bullets Women.

After nine games so far, our ladies know no defeat nor draw as they sit at the summit of the FAM Women’s Football Southern Region League table with 27 points.

Remarkably they have been free-scoring. Having found the back of the net 90 times with five games to play, they have already set a record that has never been established before in Malawian women’s football.

Well, there are so many stars making our ladies’ team enjoy a colourful league campaign. One of them is the 24-year-old Mary Chavinda, who leads the top goal scorers’ chart for the team as well as in the entire league.

The striker can’t just stop scoring as in the 18th minute of last Saturday’s match against Evirom she also found herself on the scoresheet to take her goal tally to 25 in only nine games.

As she keeps herself in the frame, many are becoming keen to learn more about her profile by asking who this woman of the moment is.

“A very good striker, she positions herself in good spaces making it easy for her to score and her fitness is always on point. She is very hardworking, a team player and has a good attitude on and off the pitch, a character that is very admirable and useful to us,” tells former Malawi National Women’s Team (Scorchers) captain and coach, Maggie Chombo, who is now Nyasa Big Bullets Women’s head coach.

The terrific Chavinda has gone on to wear the Scorchers’ colours at international tournaments.

In an exclusive interview with club media, the chilled forward, who wears the number 10 jersey at club level, revealed she embarked on her footballing journey when she was only nine years old.

As young as she was, she never let anyone sway or put off her desire to play the game that is largely dominated by men in Malawi. She was always fond of playing football with the boys and did so with a touch equally good as that of other boys.

With her passion and determination, Chavinda could only witness her career unfold seamlessly. She first played for Evirom, the team she scored against last weekend and then found herself in the books of Zomba City Queens, where she was a top goal scorer in one of the three seasons she spent in the old capital city.

In 2016 she moved to the commercial capital where she joined Blantyre Zero (now Bullets Women), a team which had established itself as a thoroughbred in Malawian women’s football.

To the striker, as she now reveals, Blantyre Zero remains the team that transformed her into the stellar club and national team player that she is now. Whilst at Blantyre Zero she immensely contributed to countless achievements for the club.

The team won more than a dozen pieces of silverware during her stay and she had a hand in all of them. In her debut year with the Zeros, Chavinda played in the final against Ntopwa in the FAM Cup and heroically scored the only goal that won them the trophy. The forward also contributed to her team’s victory in the FAM League, Presidential Women’s Tournament and the Donnas Eggs Cup.

On 1 August 2022, the striker was introduced to The People’s Team after penning down a 3-year contract which will keep her in our ranks until the year 2025.

“I am very happy to be a player of such a big brand in the country and the club has helped me in so many ways already [since my arrival]. As a football player, I must continue to always help my team do better and work extra hard to see progress in my career and hopefully I can play overseas,” shares Chavinda.

It is indeed undeniable that Bullets signing Chavinda was no mistake. And should she keep soaring with her scintillating conversion rate, she is surely destined for greatness.

PrevPreviousVote for your November Goal of the Month
NextOpponents Watch: A look at our Airtel Top 8 semi-final oppositionNext