August’s Player of the Month nominees 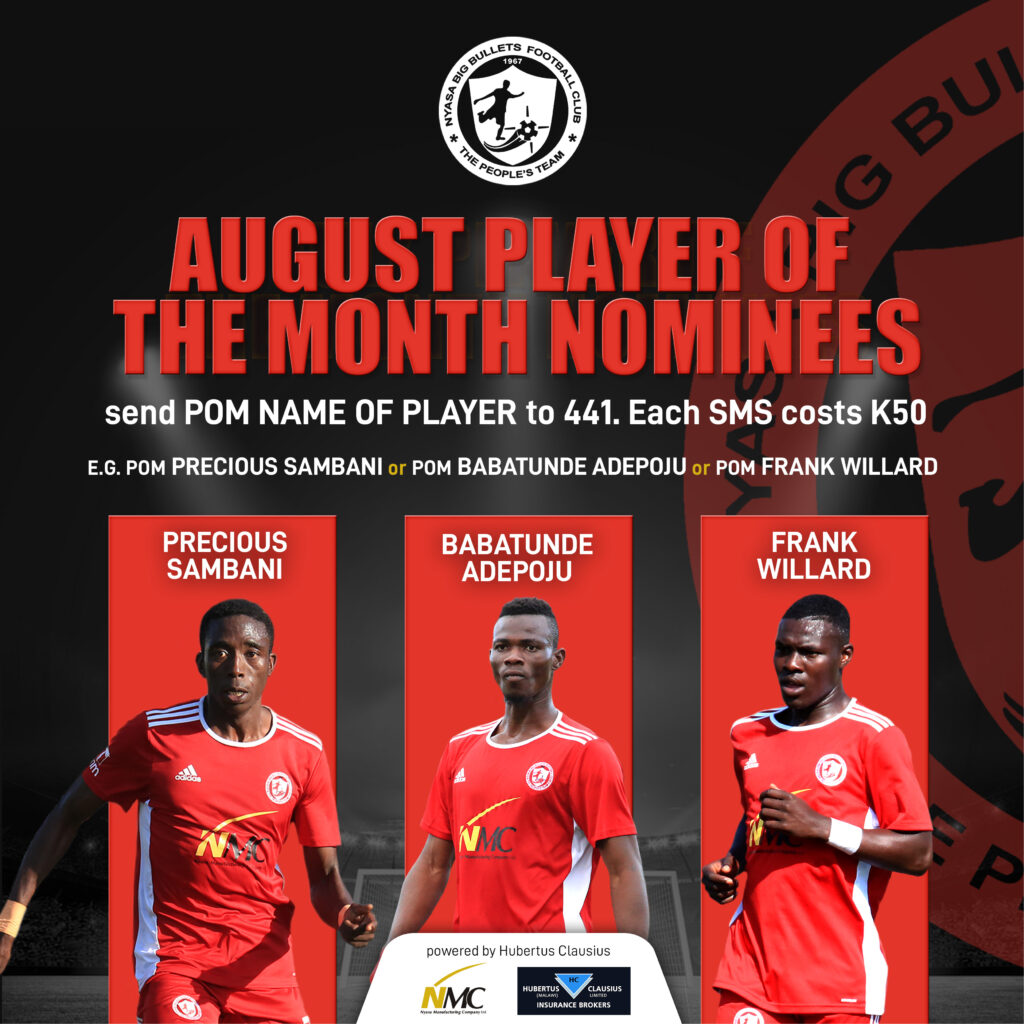 Precious Sambani, Babatunde Adepoju and Frank Willard have been nominated for the Hubertus Clausius Player of the Month of August.

Sambani, who just won the award in July, sees his name on the list again after scoring four goals in the month of August, including a brace during Nyasa Big Bullets’ 8-0 defeat of TN Stars in the TNM Super League.

The wingback scored a goal against Moyale Barracks in the FDH Bank Cup round-of-16 before netting another goal during Bullets’ win over Ekwendeni Hammers in Mzuzu in the league.

Despite being on the sidelines for close to a year last season due to an injury, Sambani has come out stronger and he is the only player to play in all the 20 Super League matches, three cup games and one CAF Champions League fixture Bullets have been involved in this season.

The list sees Babatunde, who is the current top scorer in the scorer’s chat, being nominated for the third time since Bullets in partnership with Hubertus Clausius introduced the monthly award.

The towering striker was on target when Bullets beat Moyale Barracks on penalties and contributed an assist to Patrick Mwaungulu during our 3-3 draw against Mighty Mukuru Wanderers in the Super League.

His pace, strength and ability to create spaces for fellow attackers contributed a lot to the 22 goals that Kalisto Pasuwa’s men scored in the month of August and his inclusion is no surprise considering his impressive form and consistency.

But we have a new entry in the name of Frank Willard. Our Reserves product, who just re-joined the team from Mafco FC in July, is slowly becoming the hub in the defensive midfield.

The 21-year-old’s first match against Moyale Barracks saw him controlling the midfield with accuracy, pace and the ability to switch the ball into attacking zones.

Willard also produced one of the best performances during his first Blantyre derby appearance, before dominating again during our encounter TN Stars on the final day of the month of August.

So how do supporters come in?

For any of the three players to claim the accolade, supporters are asked to send the name of their favorite preceded by the keyword POM to 441 using all the two networks from which MK50 will be deducted. Fans have seven days to vote for their favorite player.