Bullets held to a draw by Kamuzu Barracks 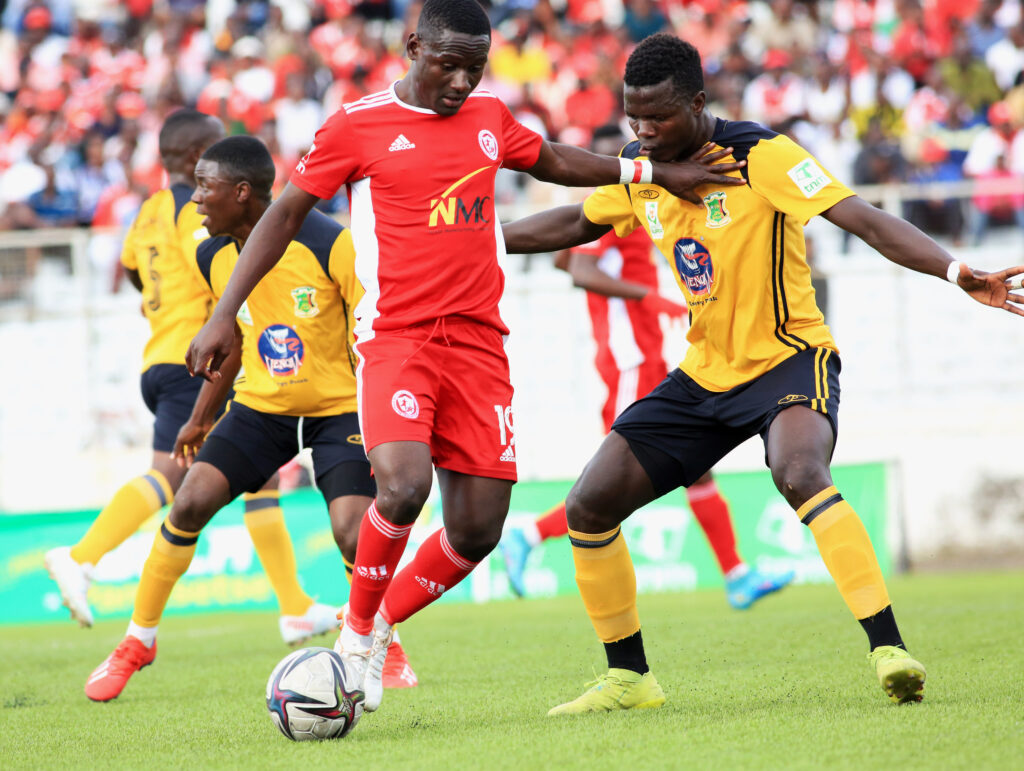 Nyasa Big Bullets’ nine-match winning streak in the TNM Super League came to an end when they were held to a 1-1 draw by Kamuzu Barracks at Kamuzu Stadium on Saturday afternoon.

This was also the first time for The People’s Team to drop points at home after winning all home games in the first half of the season.

On the pitch, Kalisto Pasuwa made four changes to the side that hammered Sable Farming in the FDH Bank Cup last week, with Clever Mkungula, Hadji Wali, Patrick Mwaungulu and Righteous Banda all given a place in the starting eleven for injured Richard Chimbamba, suspended duo of Kesten Simbi and Chimwemwe Idana and Stanley Billiat, who was dropped to the bench.

The visitors got off to a bright start and produced the first chance of the game after five minutes when Redson Nkhoma played a through ball into the path of Ndaona Daisi, who saw his effort missing Mkungula’s goalmouth with just an inch.

Bullets settled down and within the space period of ten minutes, Herbert Wayekha blocked two goal-bound shots after an offensive display from Lanjesi Nkhoma and Gomezgani Chirwa, who were attacking with speed to try to unlock the visitors’ back four.

17 minutes into the match, Nthala was called into action when he produced a stunning save to deny Blessings Mpokera from giving his side a lead with a thunderous shot outside the penalty box for a corner which was easily defended by Sam Chibvunde.

Against the run of play, the Chiwoko Boys broke the deadlock in brilliant fashion from a dead ball situation.

A freekick from the left flank was dropped into the box and headed back by Wali but a loss of commutation between Mkungula and his defenders saw the goalkeeper coming out of his line in an attempt to clear the ball, but mistimed Gregory Nachipo’s header for the visitors to break the dealock, 0-1.

This goal was all that the visitors needed in order to force Bullets into pressing the panic button and the hosts succumbed to this pressure with unnecessary mistakes, especially in the midfield where Banda, Petro and Mpokera were operating from.

In the 26th minute, Kamuzu Barracks nearly grabbed their second goal when Nachipo’s corner kick was connected by Martias Nyirenda, only to be denied by Mkungula, who came to Bullets’ rescue with a brilliant save.

At the other end, the hosts had an opportunity to level, but Petro headed over the crossbar when he was found unmarked by Nkhoma.

Pressure was mounting on Pasuwa’s men as KB controlled the tempo of the match with a very tactical approach through their wingers, making some dangerous runs into Bullets’ defensive zone, however, Zeliat Nkhoma was not at his level best as he kept on losing the ball to Wali and Nickson Nyasulu in defence for the log leaders.

Two minutes before the break Petro had another opportunity to level when he beat the offside trap to receive a long ball from Chirwa, but the attacking midfielder volleyed his attempt wide when scoring looked easier than missing and that was all for the half.

In the second half, Pasuwa introduced Misheck Seleman and Henry Kabichi for Banda and Mwaungulu as he tried to improve his attacking options, which at that moment seemed clueless.

Precious Sambani saw Nthala out of his line in the 46th minute and released a powerful shot, which attracted the attention of the goalkeeper, who put the ball away for a corner kick, which they easily defended.

The hosts were now coming wave after wave but the more they attacked, the more they got frustrated with Kamuzu Barracks’ delaying tactics that resulted in too many stoppages.

Nkhoma, Babatunde, Petro and Kabichi all invaded the opposition’s goal territory, but Chibvunde’s back-four defended with everything to continue silencing the red side of the town.

Sambani was at it again in the 64th minute when his powerful drive was once again saved by Nthala who was having a good game against one of the toughest teams to beat in the league.

But KB’s resilience was put to rest in the 64th minute when Nkhoma tapped in from a rebound following Nthala’s failure to the youngster’s powerful header from a well-taken set piece by Kabichi on the edge of the penalty box, 1-1.

With the game on level, Bullets increased their attacking prowess and attacked from all angles, with Petro coming close to scoring, but the number 10 lacked the finishing composure in front of goal.

With Bullets focusing on attack, they were nearly caught off guard with a stunning counter-attack from the visitors, who almost restored their lead in the 68th minute through Nyirenda, whose powerful drive hit the post and Nkhoma failed to finish the ball off when it landed straight in his path.

Moments later, Nyirenda came again to hunt Bullets when substitute Stanley Billiat, who came in for Nkhoma, failed to clear the ball away from his area and ended up creating space for the midfielder, only to see his attempt missing Mkungula’s right-hand post with an inch.

Bullets nearly scored in the 84th minute through Kabichi, but his drive went over the bar when Nthala’s defence was caught off guard in the line of duty.

90 minutes on the clock, referee Kassim Shaibu added three minutes and Bullets almost got the winning goal in the final minute of the additional minutes when Kabichi’s dangerous freekick was connected into the net by Babatunde only to be denied by Gilbert Nkhokwe, who blocked the ball before crossing the line and landed straight at Seleman, but the attacker failed to tap in and that was it.

The result sees Bullets opening a 12-point gap over the second-placed Blue Eagles, who are in Karonga to play Karonga United in their first match of the second round on Sunday.