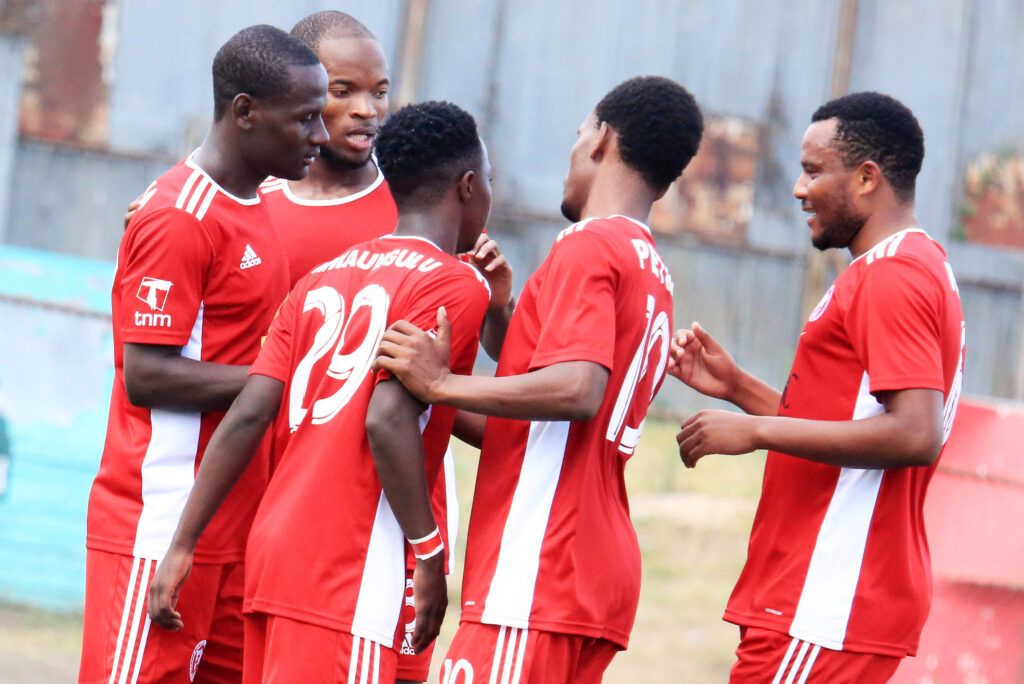 Nyasa Big Bullets secured a fourth straight TNM Super League title in style as a brace from Lanjesi Nkhoma and a lone strike from Gomezgani Chirwa earned The People’s Team a 3-1 win over Moyale Barracks at Kamuzu Stadium on Saturday afternoon.

Bullets only needed a point to secure the championship and eventually bring to an end the title race which was mostly dominated by Pasuwa’s men and Blue Eagles, who are second in the standings.

From the first whistle, the intentions were clear as Bullets invaded the visitors’ goal area in search of an early goal.

The People’s Team nearly opened the scoring inside the first three minutes when a defensive mistake from Lusekero Malema allowed Patrick Mwaungulu to win the ball in the attacking zone and made a very quick pass to Chimwemwe Idana who had a clear site to the goal before releasing a powerful drive which missed MacDonald Harawa’s right-hand goal post with just an inch.

Bullets pressed and had several goal attempts, with Nkhoma, Mwaungulu, Idana and Babatunde Adepoju all coming very close to breaking the deadlock, but were very unfortunate as they kept missing the target.

But the pressure from the hosts finally paid off in the 20th minute when Nkhoma made a simple tap-in after the forward was found unmarked inside the six-yard box by Precious Sambani who got the better of Ntopijo Njewa before sending a dangerous cross which was easily slotted into the net by the attacker, 1-0.

The goal was like a wakeup call for the visiting team who, for the first time, made their first move through Lloyd Njaliwa who released Brown Magaga to the right and the winger delivered an inviting cross which met Gasten Simkonda but his header was well blocked by Hadji Wali.

25 minutes played, Bullets once again exerted more pressure on Prichard Mwansa’s men and Babatunde should have had his goal when he was at the receiving end of Frank Willard’s long pass but the Nigerian had his effort over the bar.

The home team then doubled their tally in the 29th minute through Chirwa’s brilliant goal after he was set through by Nickson Nyasulu. The centre-half released the wingback, who spotted Harawa off his line of duty and wasted no time by volleying over the advanced shot-stopper into the net, 2-0.

Two would have turned to three when Ernest Petro made his way into the six-yard box before finding Mwaungulu unmarked and the youngster, with the goalkeeper already beaten, was unfortunate as he blasted his effort from close range over the crossbar.

Towards the 40th minute mark, Mwaungulu made a brilliant move into Moyale’s penalty box and found Nkhoma who failed to connect home as he slipped when he was about to pull the trigger and that was all for the half, going for recess with the home team 45 minutes away from sealing the title.

In the second half, Bullets started in a similar way to the first half, with Mwaungulu coming close to opening his account when his powerful shot inside the penalty box was well saved by Harawa for a corner kick which the visitors easily defended.

But it was just a matter of time before the dominant Bullets increased their tally when Nkhoma, who received a beautiful pass from Idana, made it 3-0 to completely put the game beyond Moyale’s reach in the 49th minute.

Bullets kept on pushing for more and they should have had another goal in the 51st minute when all the attacking players exchanged passes to release Babatunde who fired at goal only to be denied by Maneno Nyoni’s excellent block as the ball was destined for a goal.

Mwansa brought in Innocent Botomani for Chisomo Magombo to try to close down Bullets’ threat which would normally come from the wings.

But despite creating numerous goal-scoring opportunities, Bullets conceded from a set piece after Magaga’s freekick was connected well into the net by Njaliwa, 3-1.

This goal was all that the visitors needed to get something out of the match and they made Bullets sweat for their money because thrice, Wali and Nyasulu made timely clearances to deny Simkonda, Magaga and Njaliwa from finding the back of the net.

Njaliwa almost doubled his tally when his flying header from yet another Magaga delivery hit the woodwork in the 60th minute and this would have made a nervous ending to the match, especially to Bullets who, sometime back, gave away a lead three times to draw 4-4 before sealing the victory from spot-kicks against the same opposition in the FDH Bank Cup.

Sensing danger, Pasuwa brought in Precious Phiri for Mwaungulu to add numbers and at the same time focus on the defensive part of it to maintain the solid lead.

Bullets were forced to make another change in the 70th minute when Nkhoma sustained an injury and was replaced by Stanley Billiat.

Moyale Barracks had another glorious opportunity in the 74th minute when Clever Mkungula lost aerial combat and allowed the visitors to win the ball in a very dangerous position, but Boy Boy Chima shot wide when the goalkeeper was way off his goal line position, the closest chance which would have changed the whole complexion of the game.

Bullets had two more chances through Phiri, who was found in the offensive zone by Idana but he chose to pass the ball to Babatunde when shooting was the best option.

Moments later, Babatunde was one on one with Nyoni but he rushed to fire at goal when Sambani placed himself in a very good shooting position and that was his last involvement in the match as he was replaced by Hassan Kajoke.

Few more chances were created by the two teams but after 90 minutes of play, 3-1 it ended in favour of the champions.

The result means The People’s Team have officially sealed their 16th league title and fourth in a row with two games to spare.

They currently sit at the top with 67 points, eight points clear of the Eagles with the same number of games played.

Their next assignment is a home match against Karonga United on Wednesday before facing Dedza Dynamos on the day they will officially be crowned champions at the same venue.

Nkhoma was named Man of the Match.

PrevPreviousMatch preview: Bullets vs Moyale
NextPasuwa: If you plan well, you win gamesNext