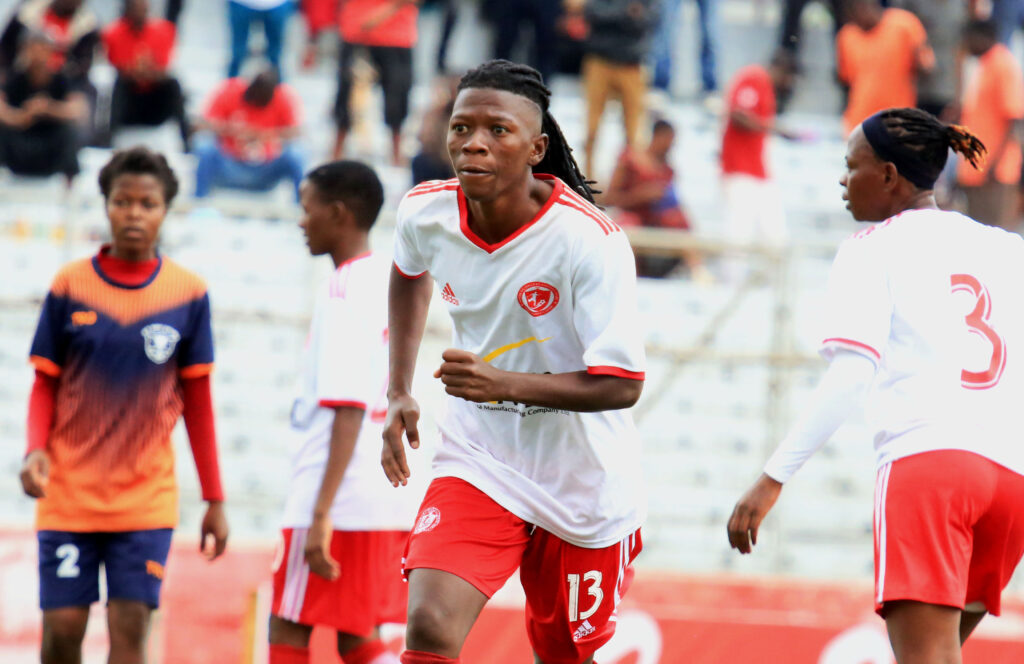 Nyasa Big Bullets Women continue cementing their place at the top of the FAM Women’s Football Southern Region League as they mercilessly defeated Blantyre Hotspurs 21-0 at Kamuzu Stadium on Saturday.

Kicking off at 11 am with Kamuzu Stadium set to host the Airtel Top 8 semi-final clash between Bullets men’s first team and Silver Strikers, our women came fully prepared and were determined to go home with countless scores.

Playing under a heavy downpour for a good part of the game, it was still a top-notch match for our ladies as they were up by 10 goals in the first half, inflicting more misery on Hotspurs than the last time when they hammered them 14-0 in the first-round meeting.

Hotspurs’ misery started as early as two minutes when Tendai Sani opened the scoring. With a pass from Vanessa Chikupila, the youngster immediately had the ball into the back of the net, 1-0.

Hotspurs tried their best to tame Bullets’ attackers but Maggie Chombo’s ladies were just too good for the visitors and Mary Chavinda netted the second 12 minutes into the game, followed by another one from Sani in the 17th minute when she was found by Pilirani Malola, who dribbled past more than five players before setting the midfielder.

Chikupila netted a brace in a minute when she opened her scoring on the day in the 24th minute before grabbing her next goal 60 seconds later.

Bullets were at it again in the 26th minute when Shira Dimba, with a pass from Mary Chavinda, pressed and registered her name on the scoresheet, followed by Vanessa Chikupila who shot a few meters away and had the ball into the net.

Hotspurs couldn’t manage even a single shot, on the other hand, our women were on fire enjoying every moment of the battle.

Chikupila nearly scored her third goal but was denied through the offside flag before two opportunities came in the 28th and 30th minutes to make it 8-0.

Every player was determined to contribute to the day’s victory and Pililani Malola managed a brace in two minutes, one a cross directly into the net five minutes after the half-hour mark and the second in the 36th minute after successfully oozing past the opposition defenders.

At 41 minutes, Chavinda was face to face with the target but she pressed too hard to see her effort flying over the crossbar and that was all for the opening half.

The leading league scorer started from where she stopped in the first half after the break as she got the ball from Dimba and pressed in the 46th minute before finding the back of the net again in the 50th minute to score the second hat-trick of the match.

Bullets Women were completely unstoppable and were ahead of every move their opponents threw their way. Chikupila was not satisfied with her hattrick as she scored her fourth and fifth goals in the 52nd and 54th minutes.

Ten minutes following her introduction, Kapanda impressively registered her name on the scoresheet after being on the sidelines for two months nursing an injury.

The arena filled with joy and cheers in the comfort of Chavinda, who once again surpassed the goalkeeper when she hit a beautiful penalty in the 67th minute before scoring her sixth goal of the match three minutes later before being substituted alongside Chikupila in the 74th minute for Scilla Austin and Asiyatu George.

In the 85th minute, Kapanda was on target again with a shot from 15 yards to score her second goal to take the scoreline to 19-0, and her strike was followed by Malola’s goal in the 86th minute following a challenge in the area and the Bullets Women no.7 completed her hattrick from the spot.

Three minutes before the 90, Kapanda’s strike closed the day’s scoring when she completed a beautiful tap-in and after the final whistle, following three minutes of stoppage time, it finished Bullets Women 21 Blantyre Hotspurs 0.

Our women’s team is pushing closer to the championship, leading the league table with 30 points from ten games now and scoring 111 goals.

What the head coach said in her post-match interview

“I am very happy with how the girls played. [Of course] we missed some chances, but mistakes are inevitable in games and we will fix that when we go back to training. Pililani Malola was also very vibrant with her defence and passes because she was very serious at training, and she did not play in the last game, you could see how she was fierce on the field today,” she told club media after the game.