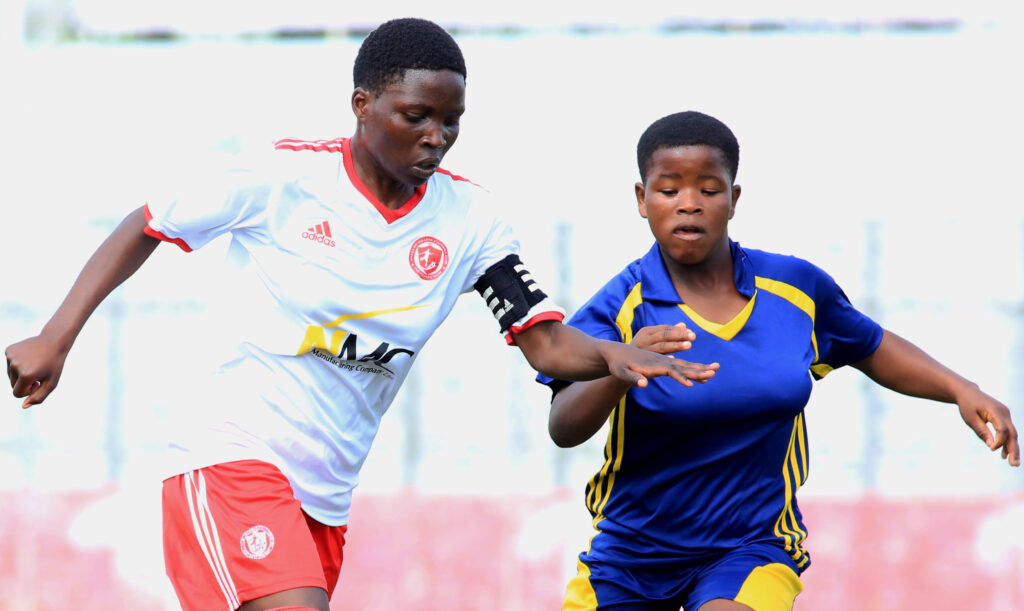 Going into the final match of the 2022 Southern Region League campaign, the Bullets Women, who were declared champions last weekend after defeating second-placed Ntopwa Women 4-0, needed nothing but victory over Bvumbwe to achieve an invisible season.

The 20 goals scored on Saturday took their tally to 169 goals this season, conceding only three from 14 games, finishing the eight-member league with 42 points.

What happened on Saturday

Our new signing, Anne van Els, handed her debut on Saturday afternoon after signing for The Peoples Team in November, opened the scoring inside early in the game when she was set by Vanessa Chikupila two minutes after kick-off.

Two minutes later, top scorer Mary Chavinda netted her 43rd goal of the season from close range following a pass from Chikupila, who released her striking partner from the left in the 4th minute.

Defensive midfielder Lyna James almost found our third goal following a back pass from Chavinda inside the area, but her effort ended in the palms of the visiting goalkeeper, Veronica Kakhobwe, sister to our men’s first team goalie, Ernest Kakhobwe.

Bullets Women were 5-nil up in the opening 10 minutes as Chavinda scored two quick goals within 60 seconds to grab the first hat-trick of the afternoon.

Minutes later, the visitors had a chance to register a shot following a long ball from their half, fortunately, our shot stopper Thokozani Mwase left her line to save the situation and conceded a freekick following an infringement on the edge of the box, only for Bvumbwe to waste the opportunity as their effort went wide.

Chavinda made it 6-0 at the stroke of the quarter-hour mark, shooting from close range to beat Kakhobwe following a square pass from Chikupila, who almost found the back of the net only to be denied by the ‘keeper, who guided her attempt away for a corner that ended into another set piece from the corner flag, which the visitors defended.

The forward, who has finished the season with 49 league goals, winning the Golden Boot, nearly scored her fifth goal of the match, she was however denied by the woodwork.

Ten minutes later Chavinda’s name was on the scorers’ list again and the creator of her goal was Chikupila, again, in the 25th minute.

van Els almost grabbed her brace of the afternoon seven yards from goal but the Dutch saw her effort going wide.

Chavinda became a provider when she set through our new striker inside the box and van Els made no mistake but pounce at goal to make it 8-0 exactly at the half-hour mark.

She nearly registered a hat-trick in the 38th minute after she was fed by Chavinda, however, her weak attempt was stopped by the opposition’s ‘keeper.

A brilliant run from the captain of the afternoon, Zainab Kapanda, on the right flank almost led to another goal in the 40th minute, however, Chavinda was denied as her connection hit the post.

Three minutes later the Bullets number 10 made it 9-0 before she was yet again set by Chikupila to make it 10-0 in favour of Bullets Women at the stroke of 45 minutes.

The visitors made the first change of the match before the end of the first half when Brenda Manyanda was withdrawn for Wayanah Dongolani, and that was the final highlight of the half, Bullets Women 10-0 Bvumbwe United Women.

Another 10 in the second half

At the start of the final half, Maggie Chombo made a change as Bullets Women substituted Lyna James for Shira Dimba.

Bvumbwe had the ball in the net immediately after the start of the second half, unfortunately, the scorer was in an offside position.

Bullets nearly got the ball into the other side’s net; however, our attacking midfielder Tendai Sani had her attempt from close range parried away by the goalie for a corner which the ladies in white and red failed to convert into a goal.

But substitute Dimba made an immediate impact a minute later when she registered her name on the scoresheet to open the scoring in the closing period in the 47th minute. The Bullets number 9, found in the area by Chikupila, weaved her way into the box to beat the goalkeeper from close range, 11-0.

van Els grabbed our second hattrick of the afternoon to make it 12-0 when she scored from the spot following a foul on Sani.

Chikupila was on target a minute later when she dribbled past a forest of defenders before sending the ball into the far right corner, 13-0.

Dimba should have made it 14, however, her strike from the edge of the box was tipped over the bar by Kakhobwe.

The visitors looked rejuvenated and came searching for a consolation goal but could not break the Bullets defence led by centre-half Emily Jossam, who got her name on the scoring list in the 65th minute when her strike from the blind side navigated into the bottom right corner to make it 14-0.

Chombo made two substitutions in the 73rd when she replaced van Els and Doreen Dickson for Linda Nyangu and Chimwemwe Sapangwa.

Kapanda scored our 15th goal of the match 18 minutes from time, sending a powerful strike past Kakhobwe inside the area.

In the 76th minute, Chikupila made it 16 from close range, assisted by Chavinda, who should have scored immediately after providing for her partner upfront, when she showed her brilliance by breaking into the box before opening fire only to be denied by the woodwork.

Sani was on target again in the 81st minute to score our 17th goal of the afternoon, before she was replaced by Asyatu George as Chombo made two final changes, with Charity Phiri replacing Sharon Dzimau.

Chikupila made it 18 in the 83rd minute before Dimba scored our 167th goal of the Season two minutes from time when she beat two defenders before slotting the ball past Kakhobwe, making it 19-0 on the afternoon.

It should have been 20 at the stroke of 90 minutes, but Chikupila had her effort wide of the post. Substitute George completed Bullets Women’s scoring this season in stoppage time to finish the 2022 campaign with 169 goals.

Our top scorer this season, the 23-year-old forward, who scored seven goals on Saturday afternoon, has finished as the league’s top scorer in the Southern Region in the 2022 campaign, with Chikupila, who netted a hat trick against Bvumbwe, finishing second with 43 goals.