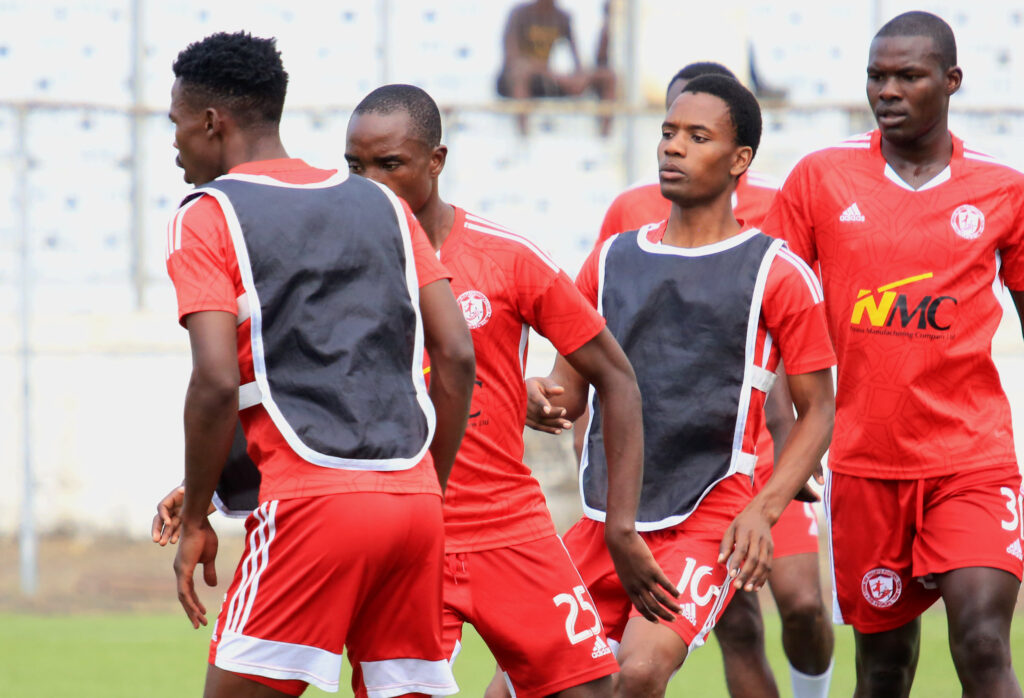 Nyasa Big Bullets will be looking for a win to be confirmed as 2022 TNM Super League champions with two games to play when they host Moyale Barracks at Kamuzu Stadium this afternoon.

The People’s Team opened a five-point gap over second-placed Blue Eagles with a 0-2 win away over Mighty Tigers on Wednesday.

Bullets are just a point from the maximum 65 points their closest title contenders can reach if they win their remaining two games, and a draw for Kalisto Pasuwa’s men against Moyale this afternoon can guarantee them a fourth straight league title under the Zimbabwean mentor.

However, there has never been an easy contest whenever Bullets host The Lions of Kaning’ina at Kamuzu Stadium, the recent one being a 4-4 result in the FDH Bank Cup Last 16, which saw Pasuwa’s men advancing to the next stage through post-match penalties.

Whatever the case, the hosts will do whatever it takes to win the match, retain the league title and switch their focus to the Airtel Top 8 Cup.

Bullets are keen to maintain their recent form which has seen them score nine goals in two matches across all the competitions.

Pasuwa’s side hammered Karonga United 7-0 at home in Airtel Top 8 on Saturday, before overcoming a resilient Tigers with a two-nil margin at Mpira Stadium midweek to edge closer to their 16th league title.

Playing 27 matches, losing once, drawing seven times and netting 60 goals is something extraordinary which has been achieved by the log leaders, who can as well set a new record for winning the league with 73 points should they collect maximum points in the remaining three matches. Bullets lead the summit with 64 points.

As for Prichard Mwansa’ men, they had a good result over Mighty Mukuru Wanderers when Brown Magaga scored the only goal to inspire them to a 0-1 away victory at Kamuzu Stadium on Wednesday.

Their win over the Nomads came after they lost to Kamuzu Barracks at Mzuzu Stadium and were desperate for a result.

It is very likely that Moyale will come into this match with confidence after putting to the sword a Blantyre giant and they will be targeting another win over Bullets, the only side unbeaten at home in the current season.

The Mzuzu-based soldiers are 7th in the standings with 46 points from 28 games and they only need a point for them to officially cement a top 8 position as Dedza Dynamos’ maximum points are 46 and one of their remaining games is a trip away to Blantyre against Bullets on the final day of the season.

Pasuwa will have all the players that faced Tigers on Wednesday fit for selection but he will continue without Anthony Mfune who is still recovering from a groin injury. Thomson Magombo is also out of action due to illness whilst Blessings Mpokera, John Lanjesi and Yankho Singo also continue to be on the sidelines due to injuries.

The game of football is played within four white lines of the field and every game presents new challenges and opportunities. However, the history books also provide content whenever matches of this nature come about and we gathered some statistics ranging from the 2008 season to date, which has mostly been dominated by The People’s Team.

Of the last 27 matches between the two sides, Bullets have won 17 and Moyale only three times, with the rest of the games ending in draws.

The People’s Team has managed to score 43 goals against Saturday’s opponents while conceding 17.

This means The Lions of Kaning’ina have scored 17 goals past Bullets in those meetings.

The last TNM Super League meeting between the two teams saw Bullets beat their opposition 1-2 at Mzuzu Stadium in the first round.

Bullets’ highest-scoring game against Moyale was in the 2020/21 season when they hammered them 5-1 at Kamuzu Stadium.

As for Mwansa’s men, the last time they recorded a win over Bullets was in the 2020/21 season at Mzuzu Stadium courtesy of a lone strike from Lloyd Njaliwa.

In the league, Bullets have recorded two highest-scoring matches by beating TN Stars 8-0 and a 4-1 routing of Rumphi United, while in the Airtel Top 8 they thrashed Karonga United 7-0 a week ago.

What has been particularly encouraging for Bullets recently has been their regularity in front of goal, netting nine times and conceding none.

The Mzuzu-based side has played fourteen away games in which they have won six matches, recorded four losses and four draws, scoring 18 and conceding 14 goals.

They have never beaten Bullets at Kamuzu Stadium for the past decade.

Nickson Nyasulu (Bullets): After returning to the first eleven in the last three matches, the defender has found his rhythm which has seen him partnering well with either Hadji Wali or Kesten Simbi at the back for The People’s Team. He has seamlessly fit into the centre of the defence in no time, making vital contributions and timely clearances to protect his goalkeeper. He will be another key player for Pasuwa, especially against an opposition which relies heavily on secondary balls and set pieces.

Lloyd Njaliwa (Moyale): Fresh off another impressive showing on Wednesday where he looked ominous on the attack, Njaliwa will be aiming to cause problems for the Bullets’ defence. The forward has proven difficult to contain through his ability to pull the strings at the business end of the opposition half, making him vital to how Moyale utilise the go-forward ball.