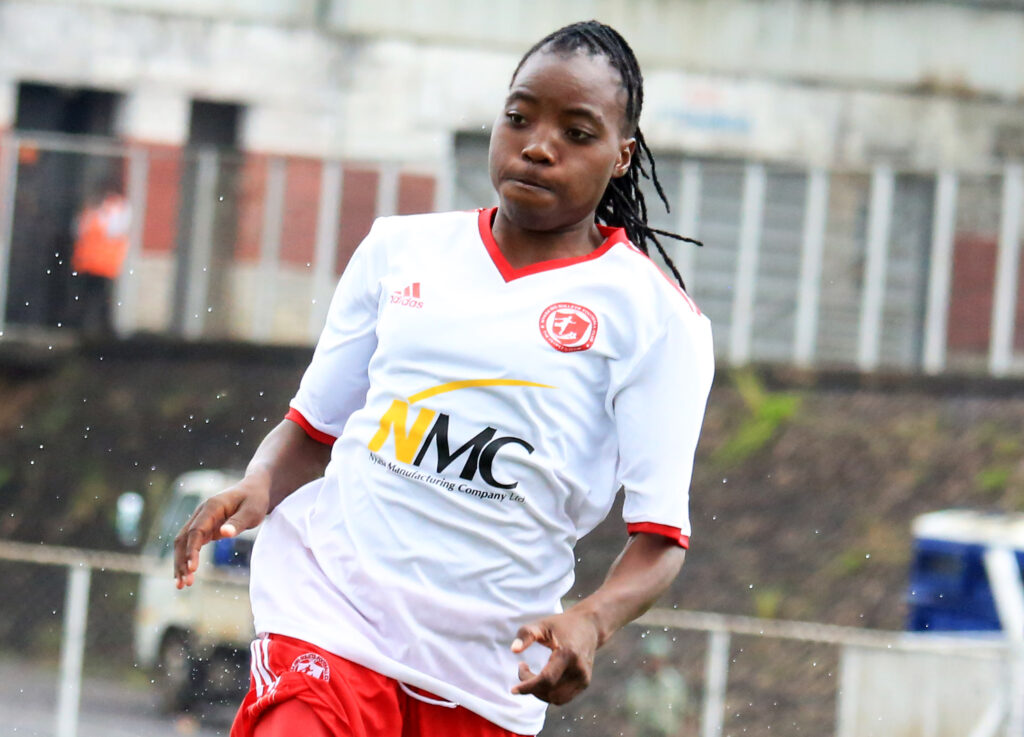 The odds for Nyasa Big Bullets Women bagging the FAM Women’s Football Southern Region League are getting higher as they cruised to an easy 14-0 victory over Bangwe Super Queens on Saturday at Mpira Stadium.

Our women started scoring as early as 42 seconds into the match as Shira Dimba, with a pass from Vanessa Chikupila opened the day’s scoring, seconded by Mary Chavinda, who scored in the 3rd minute after securing a sneaky position to beat the goalkeeper, Esther Maulidi.

The arena was filled with lively cheers from the supporters at the sight of the beautiful game The People’s Team was displaying.

Ten minutes into the game, Linda Nyangu dribbled past the hosts’ defenders and had the ball into the net but it was ruled out for offside.

A minute before the half-hour mark, Maggie Chombo replaced Shira Dimba for Tendai Sani after her no.9 had sustained an injury.

Pililani Malora should have scored it three in the 35th minute, unfortunately, her effort hit the woodwork.

Three minutes later Chikupila took the floor and scored a brace in less than 120 seconds to finish the opening half at 0-4.

Bangwe Queens tried to pull up their socks and tighten their defence coming from recess, but Chikupila, who was unstoppable with admirable determination, fiercely grabbed the ball and opened the second half’s scoring in the 50th minute to register the first hat-trick of the day.

Chombo made her second substitution in the 58th minute when she replaced Nyangu, who was making her first appearance after her outing with the Malawi Under-17 National Team at the just-ended Regional 5 Youth Games in Lilongwe, with Fauza Muhammad.

Centre-half Emily Jossam found her name on the scoresheet when she scored our sixth goal of the match in the 60th minute.

The Bullets women were definitely in the zone and our leading scorer Mary Chavinda freely moved to create shooting space after being set by Pilirani Malora to score her first goal of the day in the 65th minute.

The forward was on target again when Malora missed the target and she pressed right away. In a short period of 10 minutes, Chavinda had already triumphantly set her hat trick, amazing the arena and overwhelming Bangwe Queens.

Substitute Muhammad should have registered her name on the scoresheet but missed the target before Chikupila collected the ball to finish what her striking partner had started, setting the 10th goal.

Our two final substitutions breathed more life into the match as Chombo replaced Charity Phiri and Chimwemwe Billy for Shalom Dzimawu and Laina James in the 78th minute.

Another brilliant teamwork from the Bullets women paid off minutes later when Malora drizzled past Bangwe defenders and passed the ball to Chikupila whose short pass released the 18-year-old who immediately had the ball into the back of the net.

With the defence of Bangwe ladies exposed even further, Chavinda managed to overpower and surpass one defender on her tail to grab her fifth goal of the match in the 82nd minute and was followed by Chikupila, who continued exciting the fans when and had her name on the score sheet again for the fifth time as well.

As if 13 goals were not enough pain for their opponents, Tendai Sani shot from long range and closed the day’s scoring in the last minute, 0-14.

Chombo showed satisfaction with the performance as she told club media that her ladies keep improving and impressing her in every game, which shows that they are taking into account she is teaching them.

Bullets Women are three wins away from being crowned champions of the FAM Women’s Football Southern Region League as they currently top the standings with 33 points from 11 games and have scored 125 goals, seconded by Ntopwa, who also have 33 points from 12 games in which they have scored 90 goals.