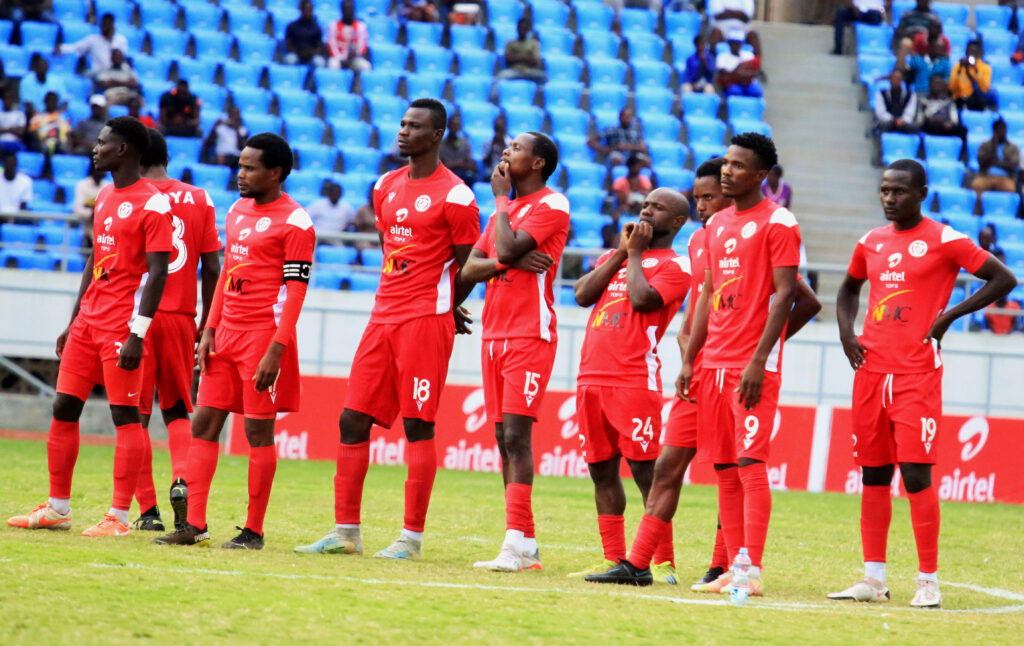 Nyasa Big Bullets’ treble ambitions in the 2022 season are over after they failed to defend the Airtel Top 8 Cup following a 3-5 loss to Mighty Mukuru Wanderers in the Blantyre derby played at Bingu National Stadium on Saturday afternoon.

The game finished goalless after 90 minutes and the winner had to be decided on penalties which Bullets missed one.

It was the first time the two teams faced off in the final of the competition since its launch in 2017.

Heading into this match, Kalisto Pasuwa’s men were unbeaten against their rivals in cup matches since 2015. Saturday’s final took place just after 50 days following their meeting in the semis of the FDH Bank Cup, with the red side of town triumphing 4-0.

The derby, played in front of a packed BNS, had The People’s Team trying to get on the ascendancy in the first 10 minutes when Babatunde Adepoju created some shooting space before releasing a thunderous strike which was well saved by Richard Chipuwa for a corner kick, which was easily defended by Peter Cholopi.

It was until the 13th minute when Isaac Kaliyati delivered two back-to-back crosses into the Bullets’ penalty box which were all cleared by Kesten Simbi and Precious Sambani.

Chances were very few with the midfield battle between Francisco Mkonda and Ernest Petro being the centre focus.

The intensity was out of this world but the two teams lacked the cutting edge to advance into the most critical part of the game.

In the 37th minute, Patrick Mwaungulu delivered a very dangerous cross into the box which was missed by Miracle Gabeya but Adepoju failed to connect from close range when Chipuwa was already beaten in the line of duty.

At the other end, Bullets nearly conceded dramatically.

A cross from Stanley Sanudi met Chiukepo Msowoya inside the six-yard box and the former Bullets forward made the first-time connection and was certain that the ball was destined to hit the back of the net only to be denied by Richard Chimbamba, who produced an excellent save for a corner kick.

With two minutes added to the clock in the opening period, the finalists opted to keep possession as they went to recess without any breakthrough.

As for Wanderers, Yamikani Chester was introduced for Misheck Botomani as Mark Harrison tried to improve his side’s attacking prowess.

It was Bullets who had their first clear-cut chance in the final half when Kajoke was at the receiving end of Mgwira’s perfect delivery into the box but his header in the 55th minute was cleared off the line by Cholopi after Chipuwa was already beaten.

The last half was as dull as the first half, with the two teams failing to break each other’s defence.

Tempers flared in the 68th minute when Kaliyati astonishingly brought down Chimwemwe Idana in a moment the Bullets no.8 had launched a promising counter-attack. The referee cautioned Kaliyati, but players from both sides nearly exchanged blows as the derby fever started to grip in.

The same Kaliyati then started a dangerous move a minute later, finding Wisdom Mpinganjira out wide, with the winger returning the ball to Kaliyati but Nickson Nyasulu easily blocked his low pass.

With less than 10 minutes left to play, Henry Kabichi replaced Idana while Vitumbiko Kumwenda came in for the injured Alfred Manyozo Jr.

Wanderers had more ball possession but failed to capitalize when they won two set pieces closer to Bullets’ penalty box as all the efforts were defended by Nyasulu and Simbi’s led back-four.

Lanjesi Nkhoma was then introduced for Bullets to replace Frank Willard whilst Vincent Nyangulu came in for Msowoya, but there was nothing much left as Godfrey Nkhakananga blew his whistle to mark the end of the match.

The penalty shootout was needed to decide who will grab the 2022 Airtel Top 8 Cup and after Simbi’s miss, Nyangulu stepped up to score the decisive spot kick that saw Wanderers end their three-year wait for a trophy.

It was also the first time in seven years for the Lali Lubani side to beat Bullets in a cup final. It was also Bullets’ first-time loss to Wanderers at the Bingu National Stadium.

Sanudi takes the first and scores – 1-0

Mkonda takes the third and scores – 1-2

Gabeya takes the fourth and scores – 1-3

Cholopi delivers a powerful one and scores – 2-4

Nyangulu takes the winner and scores – 3-5

Petro was named Man of the Match.

PrevPreviousWhat Bullets are saying ahead of the Blantyre derby
NextPasuwa reaction: The opposition was hungry to grab the trophyNext