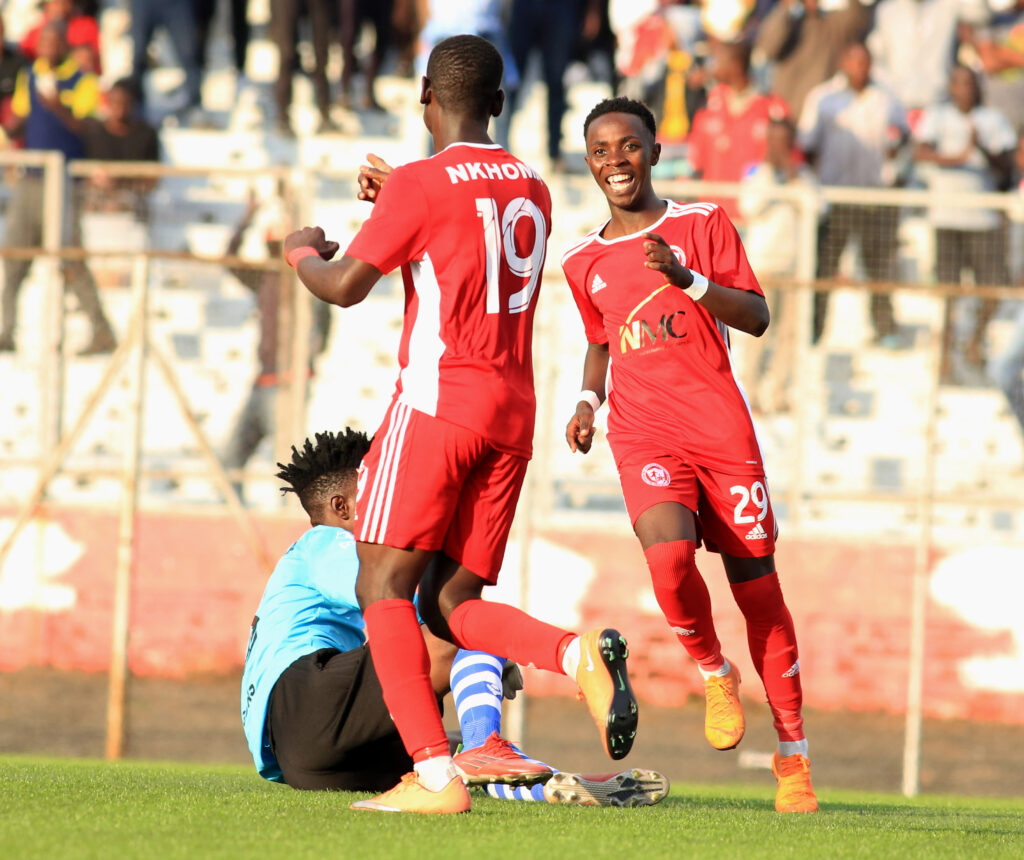 Nyasa Big Bullets have tightened their grip at the top of the TNM Super League standings after hammering Mighty Tigers 5-0 at Kamuzu Stadium on Saturday afternoon.

A classic header from Precious Sambani, two late strikes from Lanjesi Nkhoma and lone strikes from Patrick Mwaungulu and Babatunde Adepoju sealed maximum points for the defending champions, who sent a statement of intent to all the title contenders as the first round is nearing its end.

With this win, The People’s Team opened a seven-point gap over the second-placed Blue Eagles, who have a game against Mighty Mukuru Wanderers at Kamuzu Stadium on Sunday.

They remain one of the two teams yet to lose a match in the top flight league this season.

Head coach Kalisto Pasuwa maintained his first eleven that defeated Silver Strikers 3-1 before the international break a fortnight ago.

Sambani put Bullets ahead in the 16th minute with a brilliant header from Mwaungulu’s corner kick following a brilliant move that saw Tigers’ goalkeeper Dalitso Khungwa coming out of his comfort zone to produce a save that resulted into the set piece.

Bullets should have doubled their lead in the 24th minute when Nkhoma’s cross was cleared by Peter Barry, only to see the ball landing straight at Ernest Petro and the number 10 wasted no time as he opened fire with his left foot, but Khungwa was equal to the task with a stunning save.

At the other end, Kondwani Chilembwe saw his strike being cleared before crossing the line by Kesten Simbi, resulting into Richard Chimbamba’s injury after he collided with Mphatso Kasonga.

Nkhoma was at it again, this time around, forcing Khungwa into producing another save to deny the winger from finding his first goal of the season.

Khungwa, who was the busiest goalkeeper of the day, could not do anything to stop Adepoju from scoring his seventh goal of the season when the Nigerian was put through by Mwaungulu in the offensive zone to beat the defenseless shot-stopper, 2-0.

Chimbamba was replaced by Clever Mkungula in the 37th minute after sustaining that injury earlier in the match.

But this change could not stop Pasuwa’s men from extending their lead before the break.

Mwaungulu turned from provider to scorer when he scored his fifth goal of the campaign with a simple tap in on the stroke of half time following Adepoju’s excellent work from the left as he used his pace to outrun Barry, before finding the youngster who pounced from close range, 3-0.

In the second half, Tigers made a double substitution in Fatsani Chilikumtima and Rafiq Juma for Barry and Bright Ntondagowa.

But Bullets continued from where they stopped, attacking from all angles and Tigers had Khungwa to thank as his wonderful saves prevented them from conceding more goals.

Nkhoma was set through by Idana to the left and the quick winger made his way into the box only to slip into Emmanuel Nyirenda when the goalkeeper was beaten in the line of duty.

The hosts were coming wave after wave and they should have had another goal in the 51st minute when Adepoju combined well with Idana to release Nkhoma, but once again Khungwa came to Tigers’ rescue with a save for a corner kick, which they easily defended.

The kau kau boys had a single goal scoring opportunity in the 62nd minute when Simbi lost possession to Chilikumtima, but the forward was slow to make a decision and allowed Hadji Wali to make a timely intervention, clearing the ball to safety.

In the 63rd minute, Khungwa was called into action again to deny Mwaungulu from scoring when the winger got the better of Henry Chiwaya with his pace before shooting at goal.

But it was Khungwa again with yet another save, denying Mwaungulu from finding the back of the net when he was set through by Petro.

Pasuwa introduced Henry Kabichi and Righteous Banda for Mpokera and Sambani to try to add some fire power upfront in search of more goals.

The People’s Team had their fourth goal in 75th minute through Nkhoma, who finally scored his first goal of the season.

A long ball from Mkungula found Mwaungul, who quickly forwarded it to Nkhoma for a simple finish, beating Khungwa who could do nothing as his defence was nowhere near the action area, 4-0.

Nkhoma completed the rout on 78th minute, scoring his second goal of the game and season from a rebound after Idana’s shot was saved by Khungwa, 5-0.

There were late changes towards the end of the match, with Mcfallen Mgwira and Stanley Billiat coming in for Idana and Adepoju.

Banda saw his rocket missing the upright with an inch before Mgwira’s miss inside the penalty box when he was found unmarked by Mwaungulu and in the end, Bullets collected three points to move seven points clear of Eagles.

The win takes Pasuwa’s side to 35 points from 13 games and their next assignment is an away fixture against Kamuzu Barracks at Civo Stadium next Sunday.

Bullets will finish the first round with a home tie against Sable Farming next month.