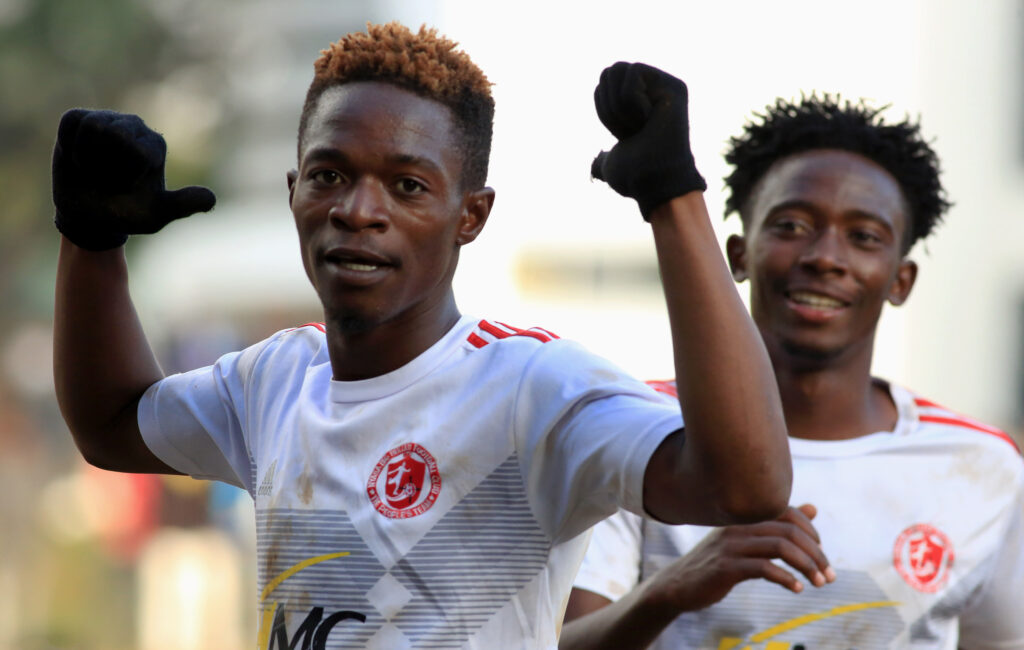 On his eighth league appearance of the season, Franklin Titani proved the hero of the day for the defending champions as his solo strike in the 56th minute handed our youngsters a vital away win.

On the wet grass of Mulanje Park, it was the home side which started the semi-final tie on the front foot as they tested our goalie Rahaman John inside the opening minute.

The Mulanje-based outfit threatened further in the subsequent minutes with sweeping attacks.

Enos Chatamas boys then took the game to the opposition’s half to fight back their early punches to set up a mouth-watering balanced contest.

However, with the pitch utterly damp and the passing game proving almost impossible, the tie did not unfold with the intensity and fluidity it carried in the early stages.

As the halftime break arrived, the two sides had enjoyed quite fair moments of the tie as the home side had started with fire but it was our youngsters who finished the opening half with flames burning.

Looking for improved performance, Chatama took off right back Chifundo Sapuwa and threw Chikumbutso Salima into the hurtling battle of the tie at the start of the second half.

Instantly, the introduction of the Bullets Reserves Players’ Player of the Season had the home side camped in their half to deal with his clever runs down the right flank.

As the young Bullets now pressed the home side up high, Fomo’s goalie Sunganani Mponda almost gifted us a goal when he misplaced a build-up pass in the direction of Salima, but luckily it proved to be too heavy for our no.7 to control and strike.

Although the hosts were now put under pressure, they remained resilient, prompting Chatama to make his second substitution by replacing Lyton Chinong’one with Chimwemwe Yassin.

The second change immediately brought the ultimate spark. Barely five minutes after his introduction, Yassin spread a lofted pass to
Salima and the forward skipped past an opponent before dispatching a cross inside the area which Titani tapped in to make it 0-1 in the 56th minute.

Having conceded, the home side spent the larger part of the second half pushing for a comeback but our game management was on point to hang on for a vital victory.

It was a difficult match which required all the guts from young Bullets to emerge victors.

They continue to thrive under hostile conditions. In a game many officiating decisions seemingly did not favour them while playing against a clumsy combative side, they still kept their cool to take first-leg advantage.

With a decent record at home, the defending champions are very unlikely to surrender their one-nil win in the return leg set to be played in Blantyre on Sunday at Kamuzu Stadium.

What the two managers said

Enos Chatama: “It is a good win for the team. It was one of those tough games. We played on a greasy surface; we could not move properly but we managed to score a goal. We believe in the return leg we are going to play good football and people will witness a good match.

In the first half, the game was locked. In the second half, we opened a lot of opportunities. We missed a lot of them but still got one. All in all, a win is a win. We have something to start from when we meet them on Sunday.”

John Majiga: “It was a very good match at the same time a tough one due to today’s weather. Losing 1-0 is not bad, I believe we can go back and improve. Everything can happen when we go to Blantyre. In football, everything can happen.”

After taking first-leg advantage with today’s 0-1 win, our youngsters have two days to prepare for the return leg hoping to complete the fine job they started.

A win or a draw will mean Bullets Reserves will play their fifth final of the season in which they will face Bangwe All Stars who beat MDF Marine in the first semi-final tie a month ago.