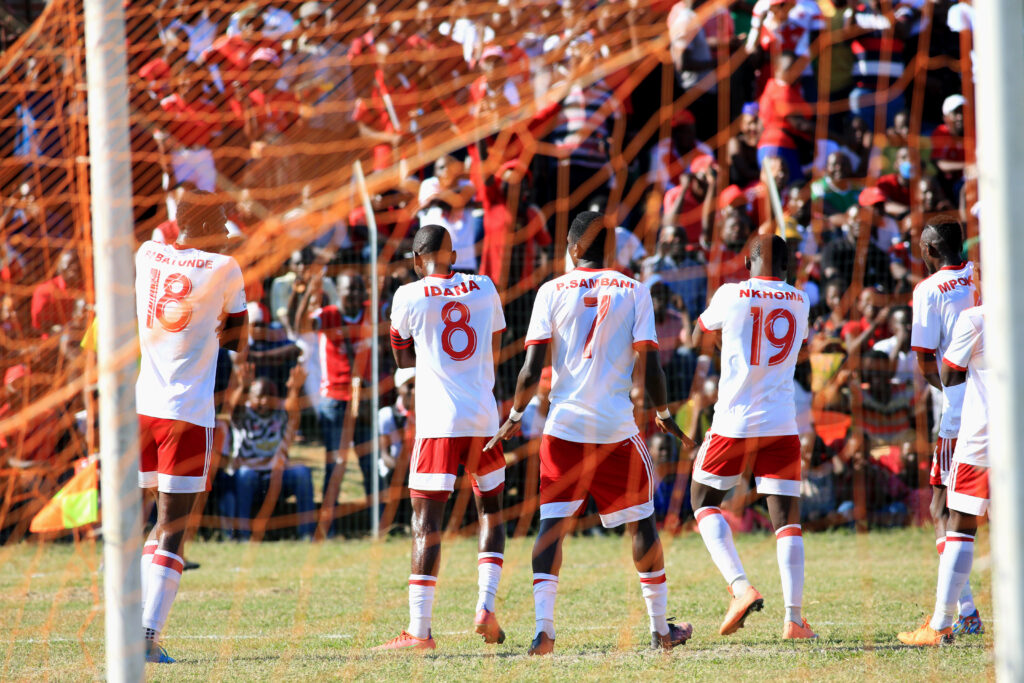 Nyasa Big Bullets’ unbeaten start to the season continued on Saturday afternoon with a convincing 2-0 victory over Red Lions at Balaka Stadium.

The win saw The People’s Team moving top of the TNM Super League standings with 26 points from ten games.

Coming from another away win against Civil Service United last weekend, Kalisto Pasuwa made several changes to the side that won 1-0 at the Civo Stadium.

It did not take The People’s Team long to get warmed up as they pressed for an early goal through Chimwemwe Idana, Patrick Mwaungulu, Babatunde Adepoju and Lanjesi Nkhoma.

Six minutes into the match, Red Lions goalkeeper Jacob Kaunda produced a double save to deny Mwaungulu and Babatunde from finding the back of the net when the duo was set through by Gomezgani Chirwa.

Moments later, Kaunda was at it again with another important save to deny Babatunde from scoring after the forward was found unmarked in the attacking zone by Idana following a mistake from Chikoti Chirwa.

But despite Kaunda’s outstanding performance between the two sticks, Bullets’ breakthrough came in the 15th minute when Babatunde was brought down in the penalty box, leaving referee Gift Chicco with no choice but to point straight to the spot from which the forward stepped up to slot the ball home, 0-1.

This goal made things very difficult for the Zomba-based side, who were failing to slow down Bullets’ pace originating from the wings.

In the 25th minute, Mwaungulu once again forced Kaunda into action with a save from a freekick committed by Mwetse on Chirwa.

With more pressure mounting on the hosts, coach Nelson Chirwa made a double substitution just after the half-hour mark, introducing Royal Bokosi and Duncan Mwale for Chirwa and Kariwo Harawa.

This change brought some stability to Red Lions, especially in the midfield where Bullets dominated from the word go.

Chimbamba, who was at ease for the most part of the opening minutes, was called into action twice to deny Mwetse from scoring through two set-pieces.

With two minutes added to the clock in the opening period, Bullets brilliantly doubled their lead with Idana and Ernest Petro combining superbly from the middle of the park.

The duo exchanged passes before the Bullets no.10 made a sneaky back-heel pass behind the defence and Idana beautifully controlled the ball with his left foot before smashing it past Kaunda, 0-2 at the interval.

Pasuwa made a half-time change when he brought on Hassan Kajoke for Nkhoma to try to add more firepower upfront.

But this half belonged to the hosts, who came out with full force in order to get something out of the game.

In the 49th minute, Pilirani Thulu made a good run to the right before sending the ball into the box, however Wali, who was very outstanding at the back, made a timely intervention.

Moments later, Willard John delivered a very dangerous ball into the box to Bokosi, who did everything right but his header went wide off Chimbamba’s goal posts to the relief of the visitors, who were now under siege.

Bokosi was posing more threat to Bullets and he had another attempt after the hour-mark but his acrobatic shot skyrocketed over Chimbamba’s goal.

The two teams made double substitutions in the 70th minute when Kanyumba and Patrick Rudi replaced Andrew Biyo and James Brown for Red Lions whilst Yankho Singo and McFallen Mgwira came replaced Mwaungulu and Idana for Bullets, 0-2.

The home side should have reduced the deficit in the 72nd minute when Willard had his goal bound shot blocked by Kesten Simbi.

Red Lions had another opportunity from a setpiece close to Bullets’ penalty box, but Willard blasted his effort over the crossbar.

Former Bullets midfielder, Paul Kansungwi, who went back to his ex-team after spending only one season at The People’s Team, replaced Newman Mwansamale, and his involvement almost made an impact in the 80th minute when he was brought down by Mgwira, allowing Mwetse to deliver the ball into the box fortunately Chimbamba was equal to the task.

Towards the last eight minutes of the match, Bullets had few chances but Red Lions’ defence was well organized and it was the first-half strikes that inspired Bullets to a convincing win, dislodging Eagles with 26 points, though the Area 30 police side will play their tenth match on Sunday against Dedza Dynamos at the same venue.