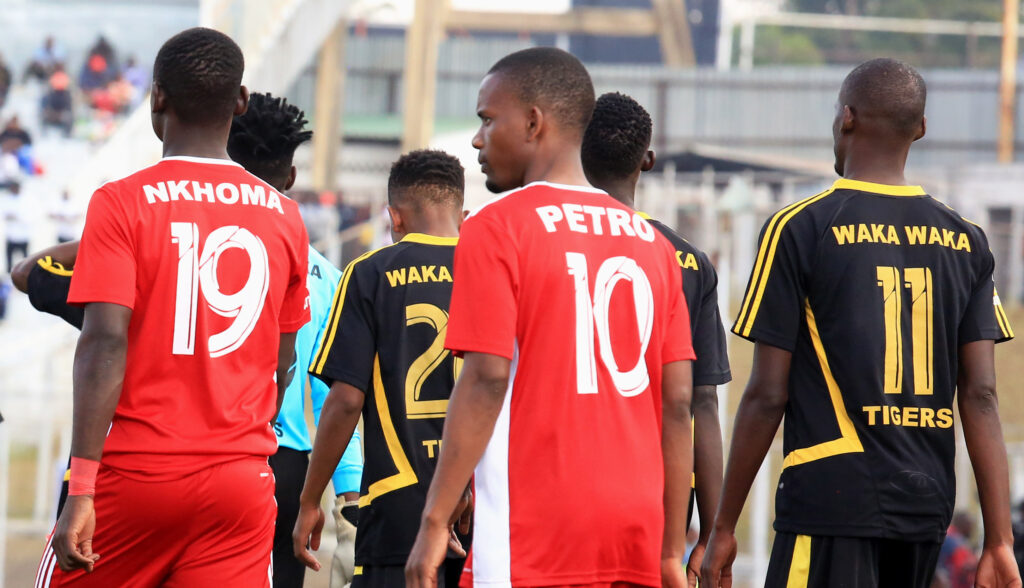 Nyasa Big Bullets return to TNM Super League action with their final away fixture of the season to Mighty Tigers on Wednesday at Mpira Stadium.

The fixture is the second of the three matches for The People’s Team within six days after thrashing Karonga United 7-0 in the Airtel Top 8 Cup quarterfinal first leg at Kamuzu Stadium at the weekend. Pasuwa’s side will then face Moyale Barracks in another league encounter at the Soccer Mecca on Saturday.

It is a week which may bring to an end the championship race if Bullets win on Wednesday and at least secure a draw against Moyale on Saturday.

Maule are on the verge of adding another trophy to their cabinet, but they have to make sure they beat the Kau Kau boys in Chiwembe and complete the mission on Saturday.

Bullets got back to their level best when they hammered Karonga United 7-0 on Saturday in the Cup game. It was a match which was played a week after Pasuwa’s side suffered the first league defeat of the season to Mafco FC before they responded in style by massacring the Northern Region-based side.

Although they registered a setback in the Super League, the log leaders have had a fair run of results as they played 25 matches without testing a defeat until succumbing to that loss at Dedza Stadium.

Pasuwa’s men, who rose to the top of the table in April this year, never surrendered their spot to anyone and with four games left to play, it’s just a matter of time before they secure the league title for the fourth time in a row.

From the 26 league matches in the ongoing campaign, The People’s Team has won 18, with seven of them ending in draws. They have only recorded one defeat, scoring 58 goals, thereby making themselves the highest-scoring team that has conceded 18 goals.

Their highest goal-scoring match was the 8-0 demolition of TN Stars in September.

As for their Wednesday opponents, Tigers were assured of their safety in the league following Sable Farming’s back-to-back defeats to Blue Eagles and Silver Strikers at the weekend.

The result meant Sable, TN Stars and Rumphi United were the three relegated teams this season, and Tigers will play their final match just to fulfil the fixture as they cannot fight for a top-eight finish.

However, they will be determined to finish the season on a very high note and beating Bullets would put the icing on the cake, ensuring an exciting end to the current season with the gap between the top two teams only separated by just two points.

The Kanjedza outfit is placed in 12th position with 31 points from 29 games, scoring 23 goals and conceding 36.

Tigers last played a league match on 17 October when they lost 2-0 to Civil Service United.

But before that, they got the better of Rumphi United with a 2-0 victory over the relegation side. They also beat Silver Strikers 1-0 away at the Bingu National Stadium.

The Kau Kau boys have played fourteen games from which they have won six times, drew two times and lost six times. They have scored 13 goals and conceded 20. They have collected 20 points from the possible 42 in their home fixtures.

Unlike last season where Bullets collected 22 points from all their away assignments, Pasuwa’s men are good travellers in the current season. From 14 games, they have won nine, drew four and lost only once. From the matches played, Maule have collected 31 points from the possible 42 points from their games away this season.

The People’s Team has not lost any competitive match since the 6244-seater capacity stadium was opened in 2019.

They have played two matches at the facility, winning both, the first one being a 2-0 win over Tigers in the 2020/21 season before recording a hard-fought 1-0 victory over Red Lions in the same season.

Over the last decade, Bullets have met Tigers 25 times in the Super League, winning the vast majority of their encounters.

Since 2009, The People’s Team has registered 16 wins, ending up on the losing side just two times, drawing seven times while scoring 41 goals and conceding 15.

The highest-scoring victory over Tigers came in the first round of the current season when Pasuwa’s men showed no mercy by putting five goals past Trevor Kajawa’s side.

Tigers’ last win over Bullets was in November 2011 when the Kau Kau boys handed The People’s Team a 3-0 defeat in the league, but since then, they have danced to the tune of the log leaders, who have collected points over and over again.

Pasuwa will be without forward Anthony Mfune and captain John Lanjesi due to injuries. The duo has groin and knee injuries, respectively.

George Chaomba (Mighty Tigers): Pint-sized but very dangerous with his ability to make runs and create spaces for himself in the attacking zones. He was on target when Tigers collected all the points at BNS when they beat The Central Bankers 1-0. He was also on the scoresheet during his team’s 2-0 win over Rumphi United last month.

He is slowly becoming one of the most important players for Tigers. He has played a vital role in his team’s surviving relegation again this season.

Frank Willard (Nyasa Big Bullets): With another intense midfield battle expected on Wednesday, the 22-year-old will again be a key cog in Pasuwa’s engine room. Willard has quickly established himself as a vital piece of Bullets’ puzzle through his ability to spark attacks from deep, while also embracing the defensive responsibilities that come with operating in the centre of the park.