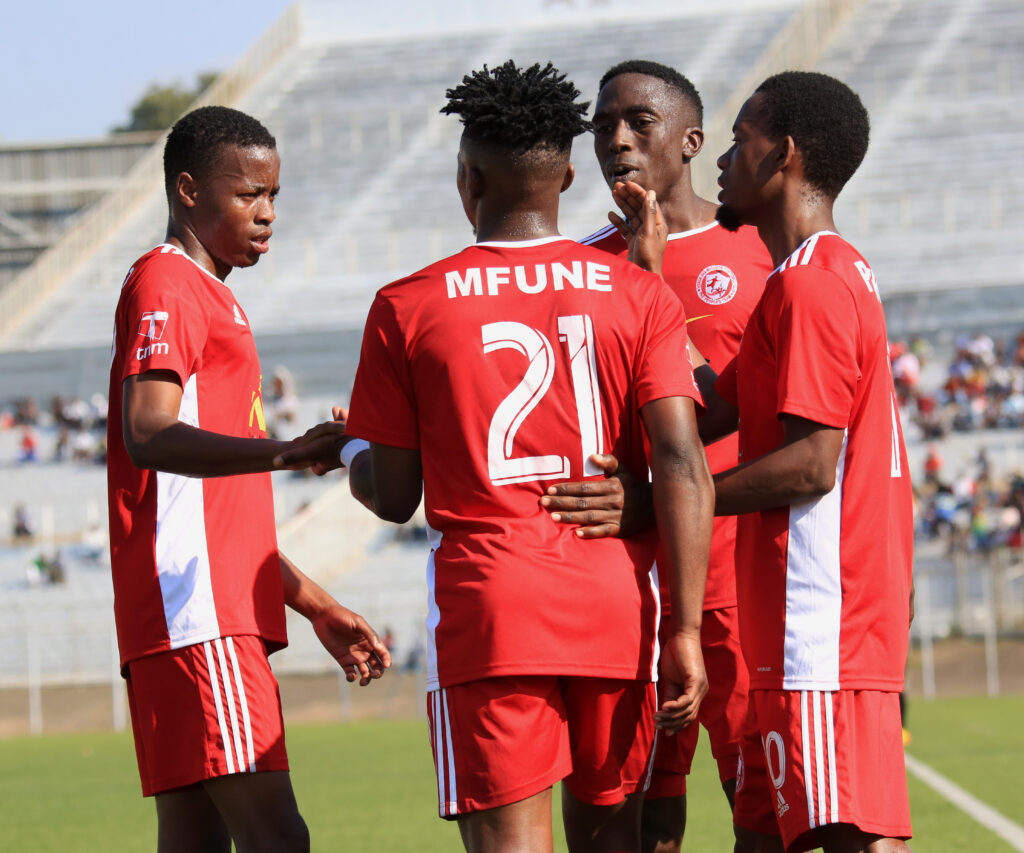 Bullets were unstoppable on Sunday afternoon as they ruthlessly demolished TN Stars 8-0 at the Kamuzu Stadium in the TNM Super League.

The rampant Maule score 7 times in the first half and completed the massacre in the second half with a single goal.

With second-placed Blue Eagles sharing the spoils with Civil Service United in Lilongwe on the same Sunday afternoon, Bullets have now extended their lead at the top to 12 points.

The People’s Team set about the thrashing in full flow. Antony Mfune almost gave us the lead five minutes from the start but failed to turn in a teasing cross from Hassan Kajoke down the left. Two minutes after missing that glorious chance, the diminutive Mfune jumped the highest in the box to head home a Patrick Mwaungulu corner kick.

Another set piece came in the 10th minute for the visitors to defend but Mwaungulu managed to pick out captain Precious Sambani, who was on hand to double our lead with a towering header.

The hunger to score more goals was all clear for Kalisto Pasuwa’s men after going two goals up as Blessings Mpokera, who started as a right back on the day, rasped a long-range strike which missed the target by a whisker.

From an unusual source, Maule got their third in the 27th minute.  Although he did not put much power behind the ball when he struck on the edge of the box, but Ernest Petro saw his effort go past the visitors’ goalie to make it 3-0.

The nightmarish Super League debut continued for the visitors’ goalkeeper, Noel Phiri, who was beaten at the near post by Mpokera, who was cleverly set up by Mwaungulu in the box.

Mercy was not what Maule was willing to show the punch-drunk visitors as Sambani, assisted by Mwaungulu again, got the fifth goal for us with a sumptuous connection outside the area.

Trying to halt the rout, the visitors resorted to replacing Phiri, who unfortunately endured an awful Super League debut on Sunday afternoon, with Blankson Kotei in goals. Nonetheless, the change of the goalkeeper could not stop the goals from raining.

After notching a hat-trick of assists, Mwaungulu got himself on the score-sheet when he capitalized on the failure of the visitors’ backline to clear a Frank Willard searching pass before producing a sweet strike into the net.

The problem was not Noel Phiri, Maule seemed to correct the visitors when they beat Kotei again two minutes after.  Not getting tired from assisting his teammates, Mwaungulu hoisted a lovely cross which Mfune tapped in to bag his second goal in the 39th minute.

In what was a one-sided half, Maule went for the break 7-0 up.

Picking up from where he left before the interval, Mfune completed his hat-trick with a power header from another well-taken Mwaungulu set piece 14 minutes after the restart.

With the tie already buried, Pasuwa made four changes after the hour mark. The coming in of Babatunde Adepoju, Righteous Banda, Stanley Biliat, and Mphatso Magaleta signaled further goals for us but somehow the visitors did not concede to our relentless attacks.

Scoring and assisting, he keeps on doing it. And week in and week out, he is making it look so easy. The youngster, who is into his first TNM Super League season after graduating from our reserves, has already exceeded the expectations of many including his hard-to-please tutor Pasuwa.

With eight goals already under his belt and having been named Bullets Player of the Month of June, the 20-year-old is not sitting on his laurels. Before being substituted in the 80th minute in today’s tie, Mwaungulu put up a splendid and industrious performance in which he managed to make our forwards look as extraordinary as they are by providing a record of five assists.

For the past decade, there hasn’t been any player who has provided that a staggering number of assists in a single Super League game.  With a total of 14 assists, he has notched so far this season, surely Patrick Mwaungulu is the king in the business of providing assists.

Lately, Bullets fans stopped cranking up the decibels whenever we take leads in games as they have witnessed us easily letting our opponents level things up. However, it was not the case on Sunday as we, for the first time in the second round, protected our lead to the end while keeping a clean sheet.

Today’s result is the biggest league win for Pasuwa since he took over Bullets four years ago. With 10 games to go, the win has helped us extend our lead at the top to 12 points. By and by, it seems there is no catching us back, another league glory is on the cusp.

The People’s Team will be on the road again after this huge win over TN Stars. The destination is the capital city, Lilongwe, where they will host the Tanzanian giants, Simba SC, in the first leg of the CAF Champions league preliminary round before travelling to Dar es Salaam for the return leg a week later.