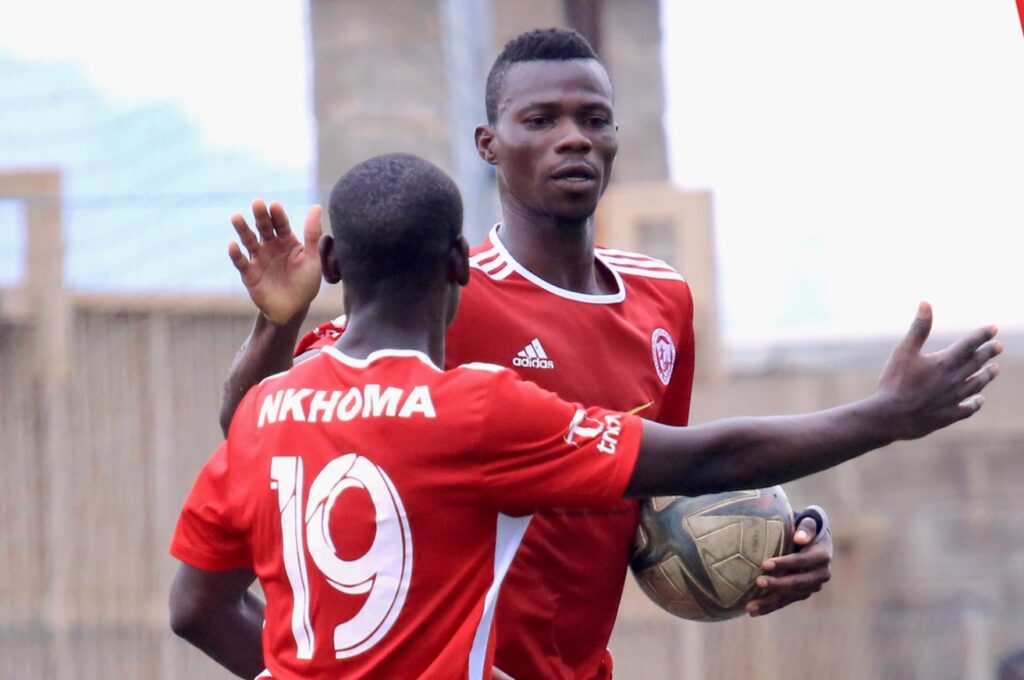 Nyasa Big Bullets have moved one step closer to retaining the TNM Super League title following a 0-2 win away to Mighty Tigers at Mpira Stadium on Wednesday afternoon.

Kalisto Pasuwa made only a single change from the side that defeated Karonga United 7-0 in the Airtel Top 8 at Kamuzu Stadium on Saturday, with Babatunde Adepoju replacing Anthony Mfune, who missed the midweek fixture due to a groin injury.

Bullets were full of energy as they continued from where they stopped against Karonga and the intentions were clear from the word go, threatening Dalitso Khungwa’s goal area but continued to miss chances.

As early as the fifth minute, Bullets created a glorious opportunity when Patrick Mwaungulu delivered an excellent cross into the box from a freekick to find Hadji Wali unmarked, but the centre-half failed to direct his powerful header at goal as the ball went out of action for a goal kick.

Moments later, an exchange of passes between Frank Willard, Ernest Petro and Lanjesi Nkhoma released Chimwemwe Idana into the attacking zone and the midfielder created shooting space only to be denied by Khungwa, who produced a fantastic save.

At the other end, Tigers created their first realistic opportunity through George Chaomba who saw his effort hitting the side netting, the only moment that the hosts threatened Bullets in the entire half.

Pasuwa’s men kept on playing their passing game but were also prone to making unnecessary mistakes in the final third, with Babatunde losing possesion anyhow and this allowed Tigers to defend with ease.

Just after the half-hour mark, Lanjesi Nkhoma had another opportunity when he was at the receiving end of Gomezgani Chirwa’s Cross, but the forward had his effort over the crossbar.

Bullets were pressing from all angles but to unlock Sammy Byson’s led defense proved futile, with every assault inside Tigers’ half well defended by the hosts.

It was in the 38th minute when The People’s Team broke the deadlock from the spot after Emmanuel Nyirenda had fouled Idana inside the area.

Babatunde stepped up to score his 17th goal of the season and removed pressure on Bullets, who were desperately looking for a goal, 0-1.

Soon after, Chirwa went on one of his surging runs forward and was almost rewarded for it. However, the wingback got his attempt blocked by Kelvin Banda for a corner, which the hosts easily defended and that was all for the half.

Very little changed in the second half, with Bullets still dominant but the only obstacle was failure to find the back of the net and add more goals as Tigers defended with everything to frustrate the visitors.

Five minutes into the half, Idana nearly doubled our lead when he directed his effort straight at Khungwa when the visitors had launched a stunning counter- attack through Babatunde, Nkhoma and Mwaungulu.

Bullets had another glorious opportunity in the 60th minute when Babatunde played a dummy pass to Chirwa who released a powerful effort but Khungwa was once again equal to the task with a brilliant save.

Pasuwa wanted more firepower and with another game coming in the next three days, he had to substitute Nkhoma and Willard for Hassan Kajoke and Henry Kabichi, whilst Frank Chikufenji replaced Anthony Ntondagowa for Tigers.

Idana was denied by the post in the 69th minute when Bullets, through Petro, Babatunde and Chirwa exchanged passes to release the midfielder, who was on sight at goal only to be denied by the woodwork, to the relief of Kajawa’s men.

The reigning champions were able to double their lead in the 73rd minute through Mwaungulu, who only needed a touch to put the ball into the net following Babatunde’s excellent work from the left to release the Bullets number 29 and the youngster drove the ball past the Tigers ‘keeper, 0-2.

With the match over in the eyes of Pasuwa, Idana and Mwaungulu were replaced by Mphatso Magaleta and Misheck Seleman as one way of managing the players knowing that another game for Bullets was in the offing in the next three days.

Tigers also brought in Taniel Mhango and Shukulani Afick for Chaomba and Maunde to try to get something out of the match but, Nickson Nyasulu’s and Wali’s-led defense was just too good to concede a goal as they set their eyes on keeping a cleansheet heading into the final three league matches of the season.

Towards the final minutes of the match, Precious Sambani was replaced by Alick Lungu as Bullets seemed to have been contented with the scoreline and what mattered was for them to keep the ball in order to kill time and it happened exactly how they planned as referee Shaibu Cassim blew his whistle to mark the end of the match.

The result means Bullets have opened a five point lead over the second-placed Blue Eagles, with 64 points from 27 games and they only need a point to officially retain the championship as they are having a huge goal difference with their closest challengers.

The People’s Team team has a 42 goal-difference against Blues Eagles’ 24.

Bullets next assignment is a home fixture against Moyale Barracks at Kamuzu Stadium on Saturday.

Idana was named Man of the Match.