Where does Mwaungulu rank among Bullets Golden Boys since 1990 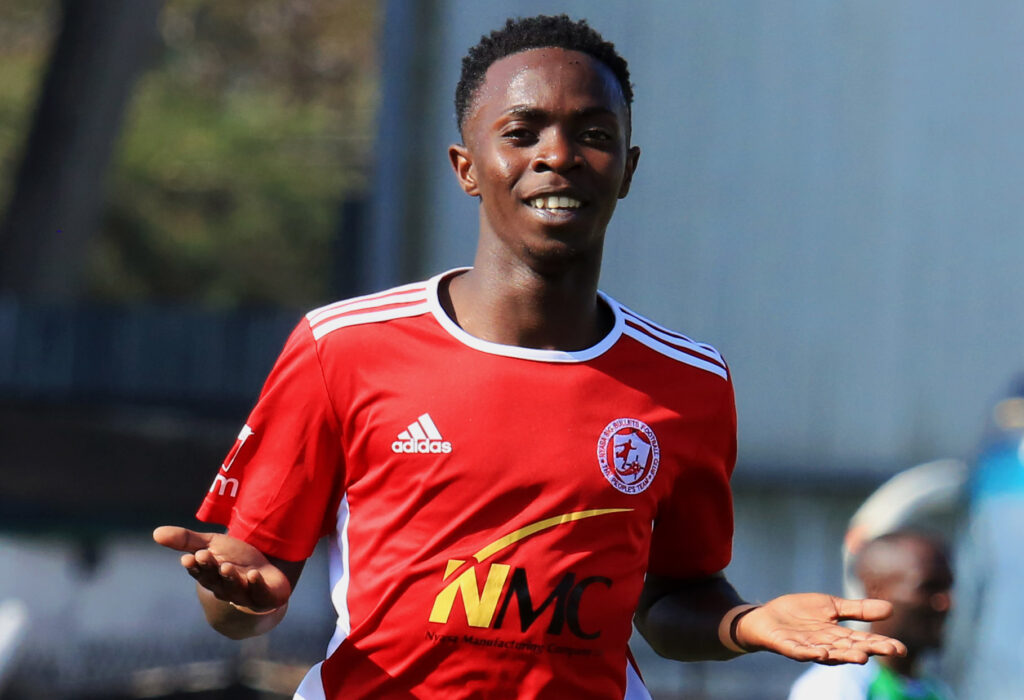 Nyasa Big Bullets have been blessed with incredible young talents since they started to root their dynasty in Malawian football. In different eras, boy wonders have emerged through their ranks. Nonetheless, a few, while they were still learning to tie their shoelaces, their glow shone the brightest.

Arriving at a tender age, some grew to earn the club-legend title. From Andrew ‘Aluki’ Chikhosi to Chikondi ‘Doctor’ Banda, from him to his son, Peter Banda, and now another one emerges in the exciting and enterprising midfielder, Patrick Mwaungulu.

Eleven months into his first season with the Bullets’ first team after graduating from the Reserves, Mwaungulu has scored 9 goals and notched up a staggering number of 20 assists for The People’s Team.

The 20-year-old midfielder, who hails from Karonga, won the newly introduced Hubertus Clausius Player of the Month club award in June and the TNM Super League Zampira Player of the Month in October. Already, he has also represented both the junior and the senior Malawi National Team.

As the youngster continues to wow fans, a comparison of him and some of the Bullets’ Golden Boys before him is becoming increasingly inevitable. We discuss some of the Golden Boys The Peoples Team has had since the year 1990 and attempt to rank Mwaungulu among them.

In the summer of 1995, the Bullets camp received a small boy named Andrew Chikhosi who had travelled some 315.3km from Lilongwe. Chikhosi had been in the books of Silver Strikers as a fledgling teenager.

Although he had featured for the Central Bankers in friendlies, the young midfielder grew impatient in waiting for his chance to break into the main team at Area 47. Craving for the top flight football he crossed town to join Civil Services United, who looked interested in accommodating his budding talent. Given a fair chunk of playing time at Civil, Chikhosi managed to put his potential on wide display for onlookers.

In Blantyre, the talent of Andrew Chikhosi became well-known to several big clubs. The swiftest to seek his signature would be James Kamfose, the Big Bullets Chairman at that time. Wasting no time, Kamfose lured Chikhosi to The People’s Team.

Many seeing the little boy for the first time had doubts about the boy making it at a club as big as Bullets. He lacked in stature and was only 17 years old. By then the game had almost a superstitious belief in old age and height.

But when the small Andrew Chikhosi took to the training ground, many were amused by his natural football talent. The then Bullets gaffer, Isaak Mhura, did not hesitate but throw Aluki into his first team plans.

Renowned football journalist, Philip Business, watched Chikhosi play in the late 90s and when describing the former Bullets player in his salad days, he says: “Andrew was fearless. He was full of tricks and was lethal in front of the goal. He was small in stature but could easily leave behind tough defenders like Walter Nyamilandu [now Football Association of Malawi president] gasping.  Even no-nonsense defenders like Stereo Gondwe were left with no answer for Andrew.”

Many Bullets faithfuls will always remember Chikhosi with his heroics in the 1997 Chibuku Cup final when he scored a brace to inspire Bullets to a 2-0 win. This was indeed the prime time for the young Chikhosi as before that game; he was crowned the 1996 Footballer of The Year.

Chikhosi’s bright performances were many but another remarkable of them came in a CAF Champions League game against a Nsanzurwimo Ramadhan-led Kiyovu FC of Rwanda at the Kamuzu Stadium. The midfielder’s splendid display in that game saw him scoring the only goal of the match. In his first season at Bullets, Chikhosi saw his goal tally reach double figures while registering several assists.

At this tender age, Chikhosi went on to put on the captain’s armband two seasons into his Bullets career, replacing the superstar, John Banda, who had left for trials with Jomo Cosmos in South Africa.  The highlights of the precious midfielder would make a lengthy film.

And truly, one cannot talk about Bullets Golden Boys without mentioning the name Andrew Chikhosi, which remains in the minds of many football fans with profound fondness.

During that 1995 summer, Chikhosi wasn’t the only prodigy to arrive at The People’s Team. From Civil Service United, he had by his side his partner in the midfield role, Chikondi Banda, who was two years older than him.

With little known about him by the time he arrived at Bullets, Banda quickly won the hearts of Maule fans with his conscientious understanding of the game in his play. Unlike Chikhosi, Banda had a considerable stature. Mainly he was recognized for his brain for the passing game and a talent for orchestration from the middle of the park.

Former MBC Sports journalist, Kevin Moyo, and son to the late Henry Moyo, the former Flames coach, watched the young Chikondi Banda play and describes him admiringly: “He wasn’t much of a dribbler but he was a great passer of the ball. It was his movement and rare change of pace in the final third that perhaps made Chikondi an exceptional young talent.”

Unlike Chikhosi, Banda grew to become successful for both club and country. His stay at Bullets saw him rack up several titles and put up some remarkable performances in the Flames colours. With him, it wasn’t much about the goals – football purity-wise made him exceptional.

After a short illness from Malaria, Chikondi Banda passed away on August 8, 2013. His legacy however puts him in the same bracket with some of the greatest Bullets legends who from tranty youngsters cut their way up to the top of the game.

When Chikondi Banda was about to start taking coaching courses unfortunately it was the time when he passed away. The football fraternity which hoped to tap into his football ideologies was left deeply saddened by his demise.

Signed from Griffin Youngsters at the age of 17, he arrived at Bullets in March 2019. At this time Peter was already a junior Flames player who was shining at international tournaments.

However, the wonderboy faced insurmountable challenges upon his arrival at Bullets. They were two of them. The first was the challenge of filling in the big shoes of his legendary father. A lot of fans nodded in agreement with the talent in Peter but were as well reluctant to tell if he could be as great as his father.

The second challenge was to break into the Bullets’ first team which was consisting of players who were mostly in their late twenties. Nonetheless, Peter defied all the sceptics and did that needing not a lot of time.

In his first season at The People’s Team, he asserted his place in Pasuwa’s team by bravely taking over from the veteran Fischer Kondowe in the right-wing role. Many came and went without being able to out-place prolific Kondowe except for Peter Banda.

After an incredible first season, which saw him find the back of the net three times and provide a good chunk of assists, he went on to win the TNM Super League Player of the Year award.

A few months into his second season, he secured a loan move to a Moldavian side, FC Sherrif Tiraspol, where despite a fruitful spell he was not given a permanent deal. Before joining his current team, Simba SC, Peter participated in the 2020 African Cup of Nations with Malawi.

Interestingly, in September, Peter made a return to Nyasa Big Bullets as his Tanzanian team, Simba SC, clashed with his former side in the preliminary round of the CAF Champions League.

In this fixture, Peter was on the oppositional side but many Bullets fans showed that they will always rank him as one of the best Golden Boys The People’s Team ever had by greeting him with prolonged enthusiastic applauses upon stepping on the Bingu National Stadium pitch.  Home and away Peter’s side emerged 4-0 winners over Bullets on aggregate.

A year after Peter Banda left, now The People’s Team has Patrick Mwaungulu, another wonder boy in their books. Off the back of scoring 35 league goals for Nyasa Big Bullets Reserves in the second tier, the creative young midfielder deservedly earned his promotion to the main team at the start of the 2022 season.

Despite that glittering development background, his involvement with the main team in his first season was always thought by many that it would be limited. Many were wrong.

Mwaungulu has already become a valuable part of Pasuwa’s squad which has already won the 2022 FDH Bank Cup and the TNM Super League title which Bullets have won for a fourth straight season and the 16th championship in total.

The exciting midfielder can put a pass through the tiniest of spaces and his precision in set pieces would make you think he could have made a five-star sniper if he was in the military.

With his rich precocious attributes, the youngster has proved too good to be reserved. The figures Mwaungulu has reached this season are more than what Peter Banda achieved in his first full season.

Asked whether he could tip the youngster to have a massive first season more than Peter Banda, Kalisto Pasuwa responded in one of his pre-match interviews earlier this season rather cautiously.

The Zimbabwean admitted that Mwaungulu, who at this time had only scored three goals, is destined for greatness. At this time, per his wont with youngsters, Pasuwa called for the boy’s protection from the spotlight.

With a delicious free-kick, the young midfielder set up Hassan Kajoke to nod home the winner and inspire us to close the 2022 TNM Super League season with a 2-1 victory over Dedza Dynamos at the Kamuzu Stadium last Saturday. That lovely assist was his 20th of the season.

Already this season, Mwaungulu has played at the Cosafa games with the senior Flames and recently in the CAF Champions League with The People’s Team.

The likes of James Chimera Junior, Grant Lungu, and Frank ‘Gabadinho’ Mhango had equally sensational and impactful talents, but the fact that their genuine spark arrived a little bit at an advanced young age explains their omission in this compilation.

The Bullets’ Golden Boys have come distinctly. Each of them had different hurdles which they jumped over to make their outstanding mark. Those Golden Boys that came before Mwaungulu can claim that they had it tougher as the Bullets squads they broke into were youthless.

Nonetheless, Mwaungulu, despite joining a youthful Bullets, something making it easy for him to fit in, has provided more than what many expected from him in his first season with the first team.

Should he keep his graph rising and rising, Mwaungulu will surely put himself in the same bracket with some of the greatest Golden Boys The People’s Team ever had.