July’s Player of the Month nominees 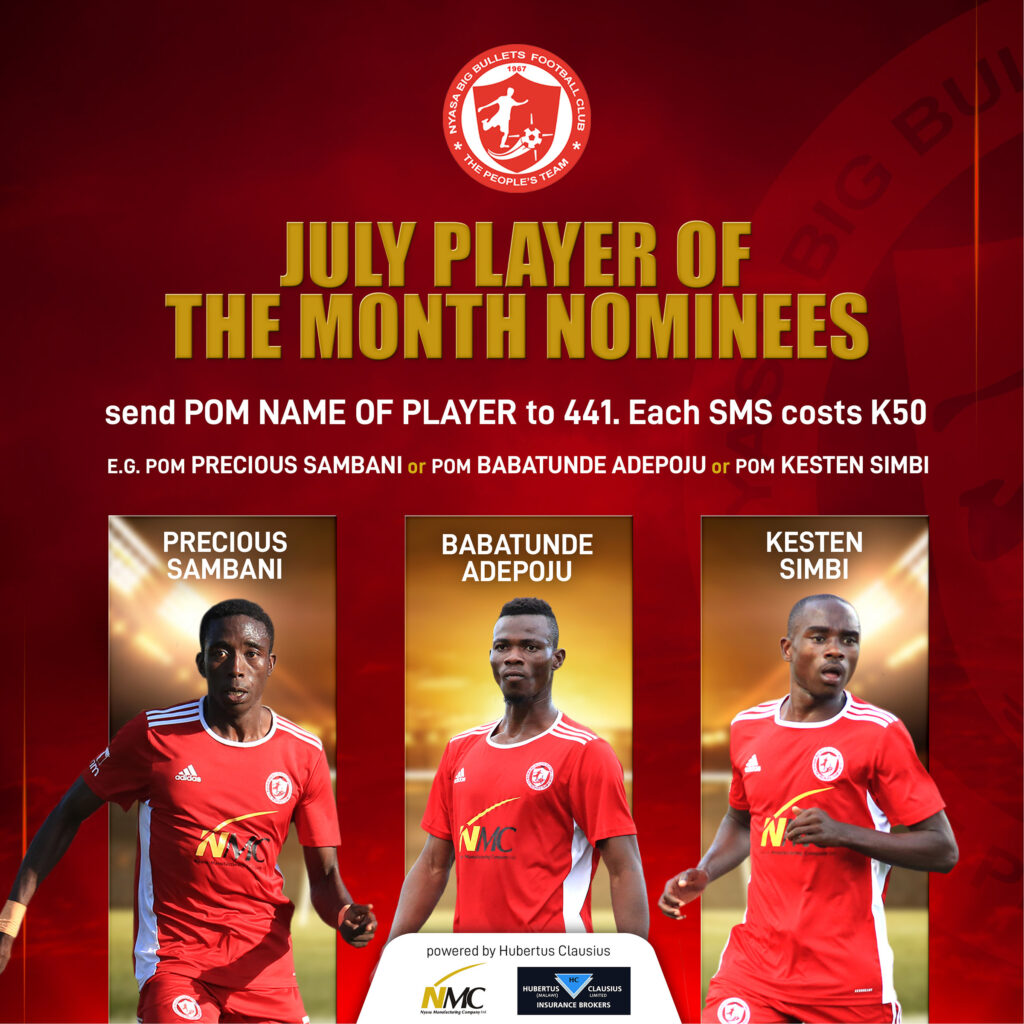 Kesten Simbi, Babatunde Adepoju and Precious Sambani have been nominated for the July Hubertus Clausius Player of the Month award.

This will be the second time for Simbi and Sambani to be nominated whilst Babatunde sees himself being nominated for the third time running.

In the month of July, The People’s Team played three league matches against Kamuzu Barracks, Rumphi United and Ekwendeni Hammers from which they won two games and drew one match, scoring six goals and conceding two.

A look at how our nominees performed in the month of July:

The enterprising defender was back to his level best when he featured in all the three games The People’s Team played and was very instrumental for Kalisto Pasuwa’s side.

Away in Rumphi against Rumphi United and in Mzuzu against Ekwendeni Hammers, Simbi rose up to the occasion with solid performances when he partnered Hadji Wali and ensured that Bullets collected all the six points to cement their position at the top of the summit.

He was good in the air, intercepted dangerous passes and protected his goalkeeper throughout the matches.

By looking at how he has been performing ever since he recovered from that gruesome injury, many would wonder if indeed the left-back was out of action for too long.

The versatile wingback was on the scoresheet when Bullets defeated Ekwendeni Hammers 2-0 at Mzuzu Stadium and in the three games he featured in the month of July, he was on top of his form with brilliant performances, making dangerous moves in the attacking zone and creating spaces for Bullets’ attacking players.

His availability in the field adds numbers in attack and no wonder in six games across all competitions, Bullets scored 16 goals with the fullback involved in most of them.

He is a player who does not only provide cover in the defensive half but also dictates play and whenever he is advancing into the opponents’ half, Pasuwa is assured of seeing something extraordinary from the wingback.

The Nigerian is a player who uses strength to torment his opponents and is also good in the air, something which we have witnessed in all the three matches played in the month of July.

Against Kamuzu Barracks, he was just very unfortunate not to score as the goalkeeper kept on denying him from finding the back of the net with brilliant saves, but despite this, he is the one who assisted Lanjesi Nkhoma to score the equalizing goal.

The 27-year-old was back on the scoresheet when he netted his 11th goal of the season during Bullets’ 1-3 win over Rumphi United at Rumphi Stadium.

He is very clever at exploiting gaps and spaces left by defences as he did against Rumphi and Mighty Tigers in June, leading to Bullets’ victories in those matches.

Babatunde has always been a key player in the way Bullets play their quick transition game. His pace has been very important for The People’s Team throughout the campaign.

To vote for your favorite player for the award that is sponsored by Hubertus Clausius, SMS POM and Name of Player to 441 using both TNM and Airtel lines.