Mfune, Chirwa, Willard nominated for October Player of the Month 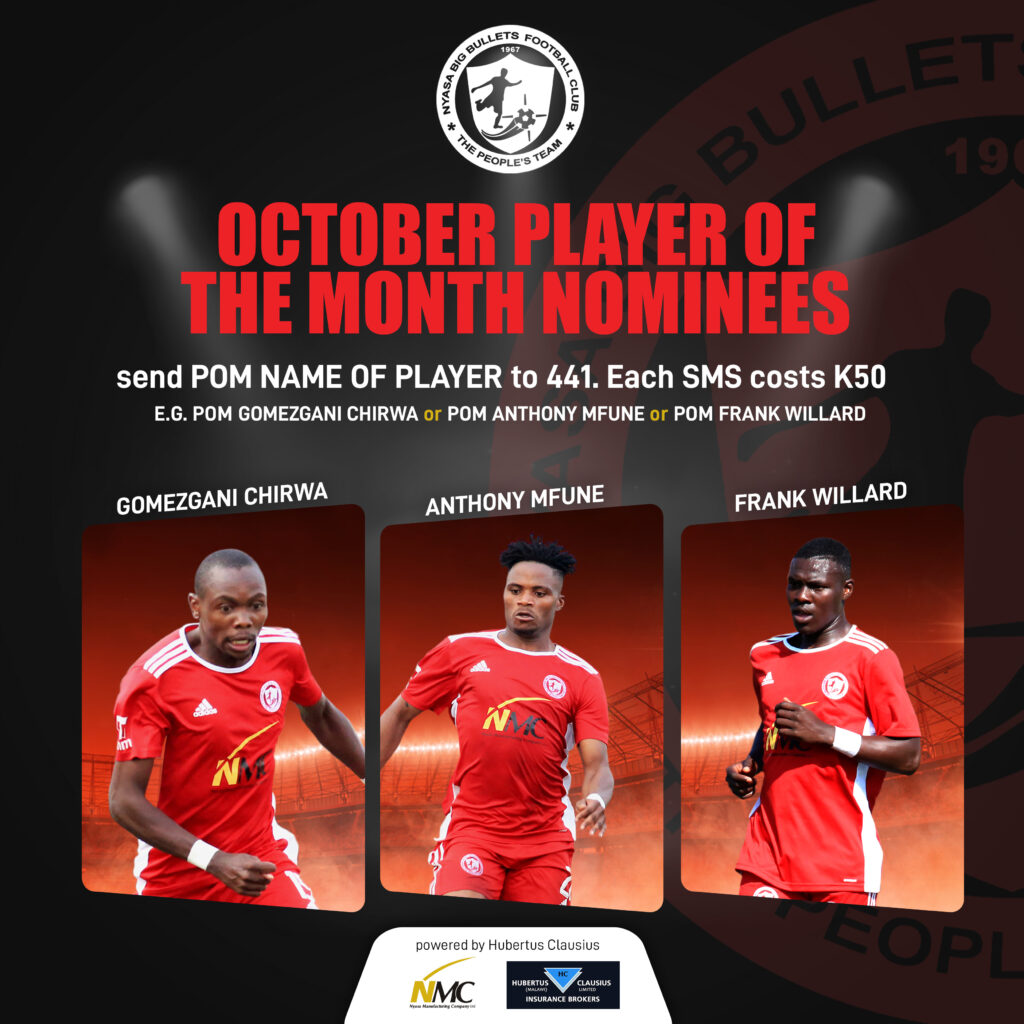 The awe-inspiring form Antony Mfune, Gomezgani Chirwa, and Frank Willard enjoyed in the month of October did not go unnoticed as they have been nominated by the Nyasa Big Bullets technical panel for the latest Hubertus Clausius award.

This is the second month in a row for Chirwa and Mfune to be tussling for the Player of the Month prize.  In September the two were nominated alongside Ernest Petro and it was the wingback who scooped the award after earning 53% of the votes.

The month of October proved to be all glittery for the forward who managed to get the back of the net two times.

He netted the equalizer against Civil Service United as Bullets salvaged a point in the 1-1 draw at the Kamuzu Stadium. Mfune was also on target when he opened the scoring in our 2-2 draw against Silver Strikers in the Super League away at the Bingu National Stadium.

The 23-year-old forward provided an assist when the defending champions squeezed past Sable Farming 1-5, setting up Babatunde for our fifth goal against the Chiradzulo-based outfit.

In the final of the FDH Bank Cup, Mfune was at it again when he hammered the final nail in Nyasa Big Bullets Reserves’ coffin for the historic final to finish 3-1 in favour of the Kalisto Pasuwa side.

The fullback, who won the award for the month of September, was impactful in the five games The People’s Team played in the month of October as he grabbed three assists.

Perhaps his most scintillating performance in the month of October came on the day of the 2022 FDH Bank Cup final against Bullets Reserves when the ball-playing defender provided all three assists.

He fed Babatunde Adepoju for the opening goal and later in the second half he sumptuously slid a through ball to Chimwemwe Idana who re-established Bullets’ lead with a low strike to the bottom far corner.

Everything was in his hands in this final as he later dispatched Antony Mfune with a lovely delivery for the third goal that confirmed The Peoples Team as the title holders of the cup for the first time.

Notching three assists in a cup final was surely remarkable from the prolific defender.

It’s not much about the goals for Frank Willard to be on this list but it is the balance and the drive the defending midfielder has been rendering Maule with in the hurtling midfield battles they faced in the scorching month of October.

Ever since he returned from Mafco, Willard has broken into the Bullets team almost seamlessly as he has become a true vacuum flask keeping the middle of the park neat and clean for the defending champions. In the month of October, in terms of football purity, he was surely outstanding to earn his nomination for this award.

His absence against Mafco in the final match of the month was felt and proved costly as the unbeaten run for the defending champions came to an end with a slender 1-0 defeat to the military outfit at Dedza Stadium.

The 411 SMS platform remains the way for the supporters to choose their winner among the three nominees.

With Gomezgani Chirwa emerging as the winner last month it will be interesting to see who will earn most of the votes this time around.