The upsoar of Babatunde in the box 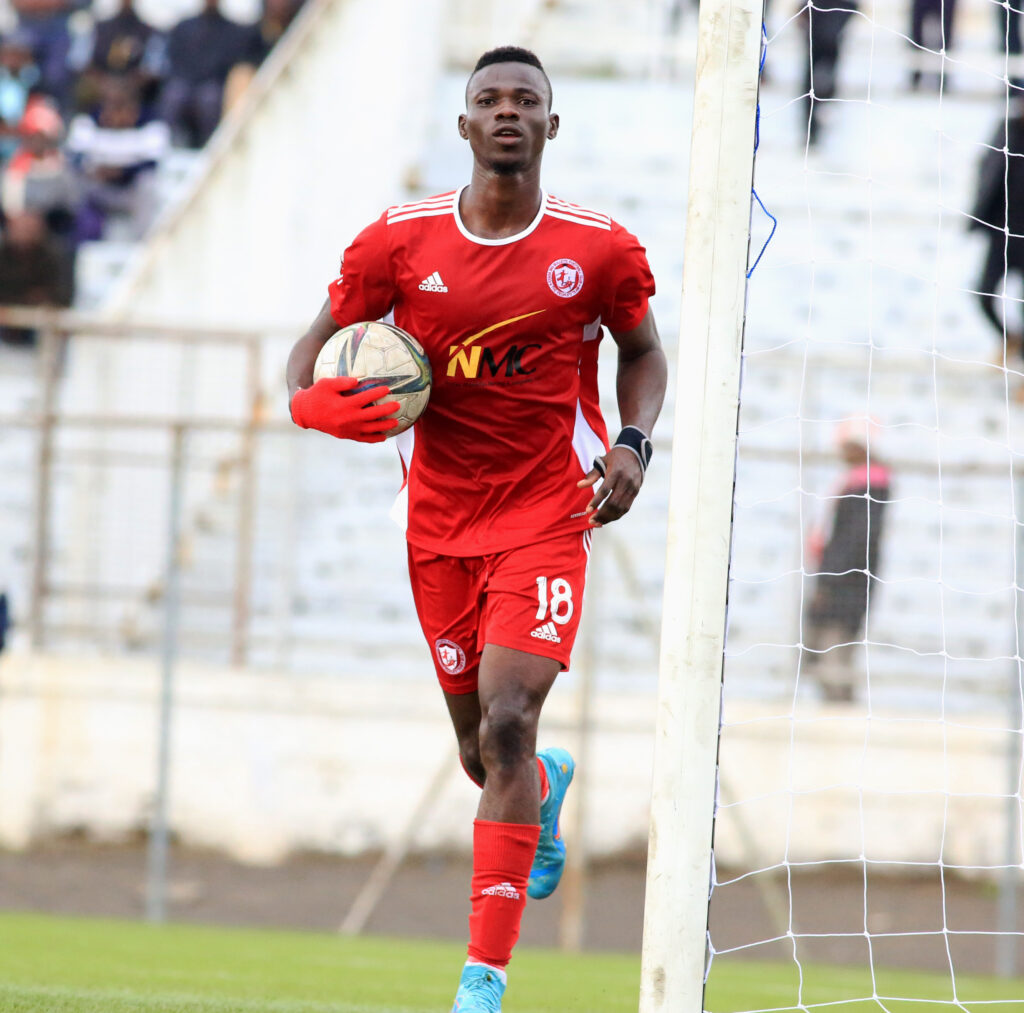 As praise goes to the entire squad of the Nyasa Big Bullets team for winning the first round of the 2022 TNM Super League, one certain player demands special commendation. Not to dim the shine of the other players who have been outstanding at Bullets this season so far, it has to be said that the Nigerian-born striker, Babatunde Adepoju, has been massive for the reigning champions.

Thanks in no small part should go to the 26-year-old not only because he is the current top goal-scorer in the ongoing campaign. Scoring 10 goals from 14 appearances is a striking rate that others might think it’s not that astonishing.

However, it is the value that his goals have come with that magnifies his contribution to The People’s Team finishing top of the table in the opening period of this campaign with 41 points from 15 games, a feat that has been achieved by the club for the first time since the year 2014.

With his current form, the striker is professing to be potent enough to win games on his own now. Three of his 10 goals are match-winners that have come when Bullets looked bound to drop vital points against top sides away from home.

Away at Moyale, Babatunde scored an impressive second-half brace to inspire Bullets to an important 1-2 victory. Against Civil Service United, clear chances were so limited that Bullets fans were starting to believe that their team was set to register a second disappointing goalless draw of the season, but the forward, out of nowhere, found a way to snatch a winner in the 54th minute.

There was no threat associated with the scrappy delivery swung in by captain Chimwemwe Idana while he slipped down on the right flanks. Many expected the poor delivery to be cleared away comfortably by the Civil’s defense which had been largely well-sit in the game. However, in a manner of a prototype goal poacher, Babatunde showed a volatile pace to get the first touch of the delivery before the Malawi international Ernest Kakhobwe and his defender, leaving them in a collision as the ball floppily went into the goal.

Rubbed off by this goal, thousands of fans who filled the Civil Stadium sang his name in full voice. At full-time, the tie would be settled in favour of Nyasa Big Bullets thanks to this Babatunde’s solo scrappy goal.

The People’s Team made a return to Civo Stadium on 26 June to face another tough side, the 2016 Super League champions, Kamuzu Barracks, and the forward scored the most marvelous of his match winners.

Aware of Babatunde’s increasing lethality, Kamuzu Barracks coach, Charles Kamanga, had set up a back-line ostensibly instructed to thwart the threat the now Bullets archetype target man presents. For the larger part of the match Kamanga’s game plan had worked out well until in the 74th minute when Babatunde replied with a stunning counterstroke.

The striker displayed cunning movements inside the penalty box to get away from his marker and connected a Gomezgani Chirwa low cross with a swift strike that went in near post, leaving the hosts’ goalie, Hastings Banda, rooted to the spot. His strike was a true example of a poacher’s goal you can watch on reverse angle a thousand times with admiration.

Not only did Babatunde’s marvelous goal seal another vital away win for The People’s Team, but it also sealed off the feat of winning the first round of the 2022 campaign.

The forward has not only won Bullets games; he has also salvaged a valuable point for the club early this season. The striker scored an equalizing goal from the spot to force a 1-1 draw in a tightly contested tie against Blue Eagles, the second-placed side giving Bullets a good race for the league title.

It is down to his rising output for Bullets this season that Babatunde deserves special recognition. Let’s not forget that Babatunde was slowly turning into a fringe player during the final days at his previous club, but the striker under the tutelage of head coach, Kalisto Pasuwa, has enjoyed sublime performances at Bullets now.

Heston Munthali, who is the former Bullets’ top goal-scorer and is now part of Pasuwa’s technical team is someone whose opinion on scoring goals can be highly respected elsewhere in the world of football. Impressed by Babatunde’s goal-scoring skills, Munthali concedes that the striker has been massive for the club.

“Baba has been one of the influential players in the team. It takes teamwork for him to score goals, but at the same time as an individual, he has helped the team by scoring important goals. He is a hard-working striker; he never loses hope when playing. He believes that any chance which comes on his way should be a goal. He gives defenders tough times when he is in possession, at the same time feeding his fellow players to score goals.

“As a striker he makes sure that his first job is to score goals when he is in the field of play. He has good qualities as a striker, he has speed, he can use both legs, he is good in the air, he has stamina, and above that, he has got an eye for goal,” the Bullets second-assistant coach commented on Babatunde’s fine form.

Arriving at Nyasa Big Bullets from the rival camp, Mighty Wanderers, at the beginning of the second round of last season, Babatunde managed to score only two league goals, but his huge maiden contribution came in Bullets’ triumph in the Airtel Top 8 competition, scoring eight goals in three games to become the highest top goal scorer of all time in the competition.

The striker scored four of those eight goals in a single match against Wanderers to become the first player to have done so in the history of the famous Blantyre derby. In a single season he had set two records that will be too hard to break in the Airtel Top 8.

The record of scoring the most goals in a single Blantyre derby tie as well as winning the Airtel Top 8 Golden Boot award with a tally of eight goals.

Fearing that Babatunde would transpire to be another footballing equivalent of a one-off performer, many critics last season might have reserved their compliments for the striker. However, provided his steady rising of impressive striking rate this season and the dividends it is bringing, Babatunde deserves a distinct acknowledgment

His predatory instincts and his colossal physical presence in the box are proving to be exceptional. All the goals the striker has scored this season so far have come within the box.

Babatunde went our final tie of the first round against Sable Farming looking to take his tally to double figures and he maintained his striking rate to bag his tenth league goal of the season. The striker may be on the right direction towards getting into the folklores of the best number-9s Nyasa Big Bullets have had in its rich history.