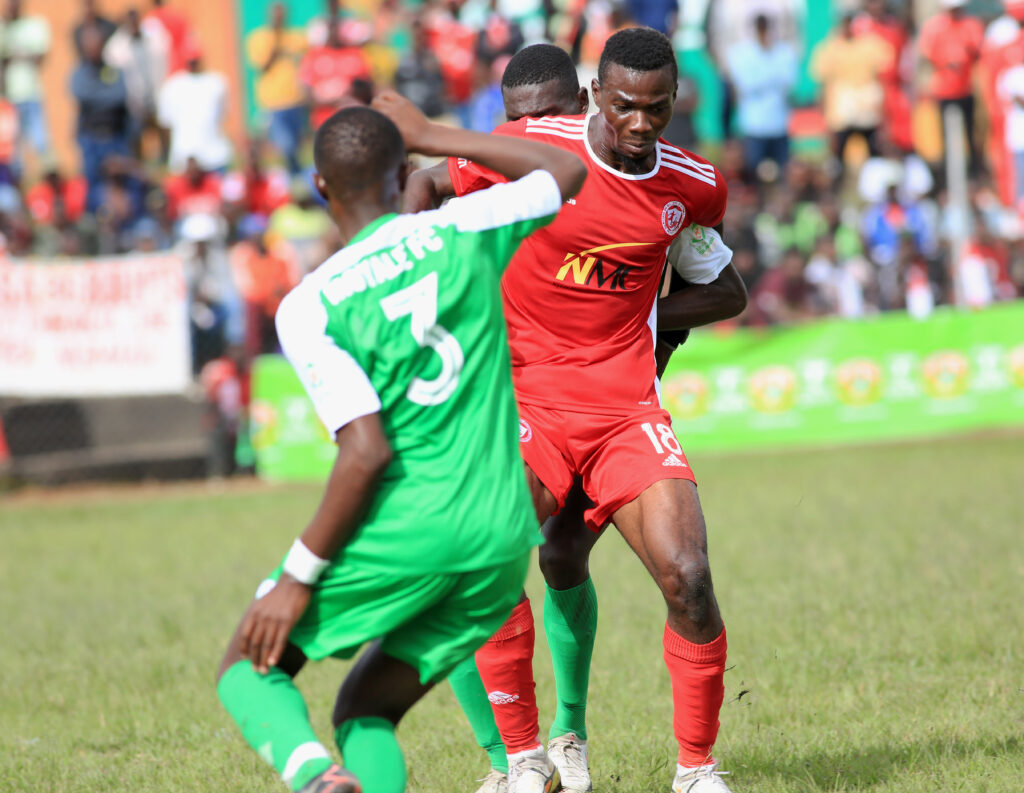 A comprehensive performance saw Nyasa Big Bullets draw within two points of early pacesetters Blue Eagles after they registered a 2-1 victory over Moyale Barracks at Mzuzu Stadium on Wednesday afternoon.

It was a good recovery for the TNM Super League defending champions who had dropped two points away to Karonga United four days earlier.

With unstoppable heavy rains throughout the night, Kalisto Pasuwa’s men had to adapt to playing on a surface which was muddy and bumpy in order to get the maximum points.

Pasuwa made three changes to the side that played on Saturday by handing Righteous Banda his first start of the 2022 campaign following his recovery from a knee injury, alongside skipper John Lanjesi and Henry Kabichi who replaced Nickson Nyasulu and Yamikani Fodya, respectively.

The visitors started the better of the two teams and almost took the lead in the eighth minute when Banda’ well taken free kick was saved by Simeon Harawa in goal for the hosts.

In the 18th minute Adepoju saw his header going over the cross bar from Patrick Mwaungulu’s corner kick, before Davie Msukwa had his first attempt at the other end missing Rabson Chiyenda’s upright with an inch.

Lanjesi nearly grabbed his first goal of the season after the half-hour mark, however the center-back saw his goal-bound volley blocked by Nyoni when Harawa was already beaten in the line of defence.

Three minutes later Bullets launched another spectacular counter- attack to pierce through Moyale’s defense when Gomezgani Chirwa used his pace to outrun Limbani Simenti in the right flank before delivering a low cross pass to Chimwemwe Idana, who produced a dummy to Adepoju, but the forward saw his attempt blocked by Innocent Bottomani.

The defending champions were now coming wave after wave and they should have opened their account in the 37th minute when Mwaungulu delivered yet another beautiful ball into the box from a set piece to Adepoju, who headed wide when he was unmarked in the six-yard box.

Towards the last three minutes of the half, Adepoju won a free kick in the offensive half and Mwaungulu stepped up only to have his attempt saved by Harawa.

One more chance followed in the additional minutes of the opening half, but Precious Sambani failed to connect home from Mwaungulu’s set piece and that marked the end of the half.

In the second half, Pasuwa brought in Hassan Kajoke for Banda to try to improve his attacking options as the clock was ticking very fast against The People’s Team.

It only took five minutes into the half for Bullets to break the deadlock.

An excellent corner kick from Mwaungulu into the box was connected into the net by Sambani, who rose high to power a header home, 0-1.

Few minutes later, Kajoke missed a glorious chance when he was set through by Adepoju and the forward skyrocketed his shot over Harawa’s goal post.

The hosts then introduced Hassan Upindi for Msukwa to reinforce their attack in search for an equalizer.

Bullets suffered a massive blow in the 60th minute when Sambani was stretchered off after sustaining an injury and he was replaced by Eric Kaonga.

Pasuwa’s men were able to double their lead in the 63rd minute through a counter-pressing move that originated from Ernest Petro, whose pass found Kajoke after the home side failed to clear the ball and the Bullets number 9 did everything right with his left foot to set Adepoju, who made a clever finish past defenseless Harawa to net his third league goal of the season, 0-2.

The second goal saw Bullets dropping and this invited pressure from the home team and they nearly pulled one back in the 68th minute from Timothy Nyirenda’s freekick on the left flank where Lloyd Njaliwa was operating and the winger connected the ball into the box only to be denied by Lanjesi, who made an excellent clearance to the relief of the visiting team.

But Bullets’ resilience was put to the sword in the 76th minute when Upindi capitalized on a defensive mistake to reduce the arrears with 14 minutes left to play.

Pressure was now mounting on Bullets to hold on to their slender lead, forcing Pasuwa to introduce Misheck Seleman and Yamikani Fodya for Idana and Mwaungulu.

The hosts sent everyone into Bullets’ half but twice, Chiyenda made two important saves to deny them from equalizing and after 90 minutes of play, The People’s Team walked out of Mzuzu Stadium with all the points.

The result means Pasuwa’s side has collected four points from the possible six from their Northern Region outing.

The People’s Team has also reduced the gap with log leaders to just two points, with Eagles on top with 19 points from seven games whilst Bullets are second with 17 points from the same number of games.

Bullets will be at home on Sunday as they host rookies Rumphi United at Kamuzu Stadium.

PrevPreviousIt will be another Tough Tie – Pasuwa on Moyale
NextMatch Report: Bullets thrash Rumphi 4-1Next