June’s Player of the Month Nominees 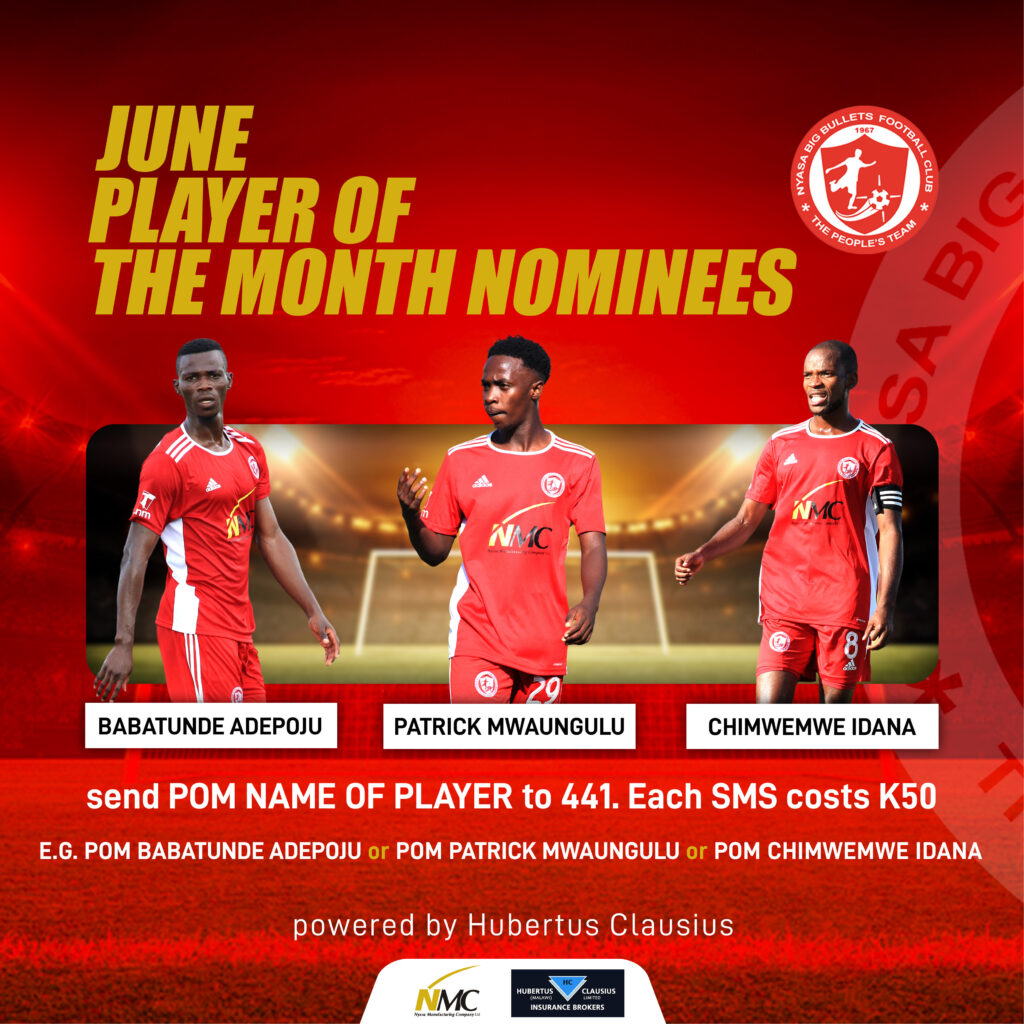 It is yet another opportunity for Nyasa Big Bullets fans to vote for the most outstanding player this month, sponsored by Hubertus Clausius.

The month of June was not a busy period for the senior team as it only played two TNM Super League games due to a two-week international break, and the boys maintained their incredible ride, scoring six goals and keeping clean sheets in both matches.

With the six points collected against Mighty Tigers and Kamuzu Barracks, Bullets extended our unbeaten run to the season and opened up a massive lead at the top of the standings.

After this extraordinary performance, we have three players who have been nominated for the Player of the Month of June and these are…

Already voted May’s Player of the Month, Idana continues to be the shining star in the midfield of the team with his outstanding performance donning the red and white shirt.

With four goals and five assists to his name in the TNM Super League so far, the Bullets vice-captain has contributed enormously to the team’s current form of 13 wins and two draws in the opening round of the 2022 campaign.

His contribution has seen Bullets finishing top of the standings for the first time since 2018 with 41 points, and the team has surpassed a record of highest points collected in the first 15 Super League matches set by Mighty Mukuru Wanderers in 2017, which was 36 points.

Collecting 41 out of the possible 45 is a remarkable run that can be attributed to the teamwork orchestrated by Idana hence his second nomination in a row.

No doubt about this name, which is currently enjoying top form in the Super League by netting week in, week out.

The 27-year-old forward was on target once and provided an assist when Bullets hammered Mighty Tigers 5-0 a fortnight ago.

His exploits saw him scoring a stunning goal that inspired The People’s Team to a hard-fought 1-0 victory away to Kamuzu Barracks.

The Nigerian is the current top goal scorer in this campaign with ten goals and this remarkable form has seen him being nominated for the Player of the Month of June.

The enterprising winger is a darling to Bullets fans following his performance for The People’s Team ever since he got promoted from the Reserves.

The 20-year-old was on target when Bullets thumped Tigers and also provided three assists to his name, with his brilliant corner kick meeting Precious Sambani, who scored the opening goal.

Mwaungulu also provided Babatunde Adepoju with an assist when his intelligent pass found the striker unmarked in the offensive zone to nod home our second goal.

The winger was not yet done with assists when he provided his third of the day to Lanjesi Nkhoma, who ended his goal drought with a simple finish.

By being nominated, it is a clear indication that he contributed a lot to Bullets’ success in the month of June.

With three players nominated, it is up to the supporters to decide on who should walk away with K100, 000 and the beautiful accolade, courtesy of our partners, Hubertus Clausius.

Send POM and name of the player to 441 and each SMS will cost MK50. Vote as many as you can for you to stand a chance of winning a Hubertus Clausius golf shirt and/or ticket to our next home game at Kamuzu Stadium.

Voting is opening for seven days and the winner will be selected based on the number of votes accumulated.